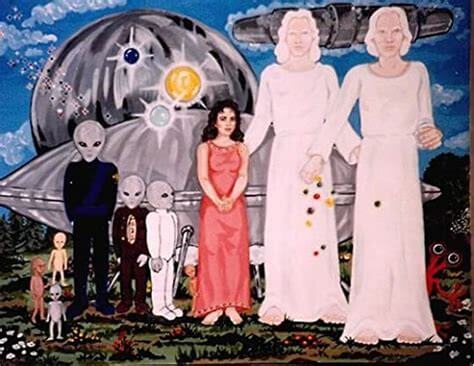 Raymond Fowler has been a UFO investigator since the 1960s, and as a researcher dedicated to the subject he has few equals. When he first began his field research, which consisted of following up on sightings reports that came his way near his New England home and frequently traveling to the actual locations where flying saucers had been seen, Fowler and his peers in Ufology were in hot pursuit of what they believed to be physical spacecraft visiting Earth from somewhere out in the universe that was completely unknown.

Investigators in those early years were mainly cataloging lights in the sky and metallic airborne devices that were solid enough to show up on radar but nevertheless exhibited flight maneuvers that manmade aircraft were not capable of. The spacecraft would sometimes leave traces behind, such as indentations made by landing gear or strange circular burn marks on the grass where a UFO was seen to have touched down.

At the time, in terms of hard science, any reports of alien occupants of the flying saucers were not given much credence, especially by researchers who took the subject seriously. Speaking and interacting with UFO occupants was a concept embraced by the contactees of the 1950s, who told of golden-haired space angels who took their chosen humans on trips to Venus – a kind of “lunatic fringe” belief. No serious researcher wanted to be tarred by the same brush as the contactees, and Raymond Fowler shared that disdain himself at first.

In his latest book, called “UFOs: The Ultimate Abduction,” Fowler gives a fascinating account of his early days on the trail of physical UFOs, providing a picture of that moment in history in which the government, the military, the scientific community and the public in general grappled with the mystery of just what was being seen so frequently in our skies.

At the time, the mid-1960s, Fowler was among those advocating for Congress to open an official inquiry into the subject and even had some of his research entered into the Congressional Record. Fowler also tells the story of Project Blue Book, an agency within the Air Force tasked with collecting and compiling UFO reports from civilians that was discontinued in 1969 based on the recommendation of the less-than-trustworthy Condon Report, a government-contracted study of the subject conducted by academics at the University of Colorado.

The first several chapters of “UFOs: The Ultimate Abduction” are an absorbing account of those earlier years, but the real fascination the book holds is in Fowler’s telling of the story of how the nuts-and-bolts evidence he examined initially eventually led him to embrace a much different view of the UFO phenomenon. He was following the data, not just the whimsy of idle speculation.

Fowler’s understanding changed over time as he began to put together a puzzle, an alien jigsaw that combined some of the precognitive and out-of-body experiences of his father as well as moments from Fowler’s own youth.

At two or three years of age, he encountered a light that bathed him in love. Other encounters with loving entities of light would follow, but Fowler characterized those moments as “religious” experiences that were not UFO-related. In fact, if pressed to do so at the time, Fowler would have condemned “spiritual” or “supernatural” UFO encounters as “demonic” and totally removed from the loving purity of what he had experienced.

Much of Fowler’s spiritual journey had its origins in his investigation of Betty Andreasson, a devoutly Christian New England housewife and mother who claimed grey aliens entered her home in 1967 and abducted both her and her daughter. Fowler was present when Betty recalled her experiences under regressive hypnosis and he would eventually write five books on Betty and her family. The titles may already be familiar to those reading this article: “The Andreasson Affair,” “The Andreasson Affair Phase Two,” “The Watchers,” “The Watchers II,” and “The Andreasson Legacy.”

In a recent exchange of emails, Fowler clarified his views for me on Betty and what had happened to her.

“I believe that Betty’s extraordinarily strong fundamentalist views,’ he told me, “influenced her testimony on several occasions. In ‘The Andreasson Affair’ series of experiences by Betty, we must remember that they are told by a very religious person and strongly influenced by her belief system as she sought to make sense of what she was experiencing. I do not see any definitive connection between Christianity and the UFO phenomenon. People tend to see and interpret such experiences through the spectacles of what they want to believe or disbelieve.

“I might add that the entities associated with Betty,” Fowler continued, “seem to have encouraged her in her faith and may even have gone along with it in some sense so she would be more pliable in her relations with them and also not to upset her. For myself, I would reject the terms ‘supernatural’ or ‘spiritual,’ because every bit of the UFO phenomenon is natural and only appears to be supernatural because most of it is beyond our understanding.”

Taken together, the Andreasson books relate the alien-religious odyssey of not only Betty and her family but also Fowler’s realization of his own place in the cosmic drama that is the UFO mystery. His transition from Christian fundamentalism to a more open – perhaps an even more loving – view of reality also incorporates essential truths learned from the study of Near Death Experiences, including an examination of the research of NDEs conducted by Dr. Kenneth Ring that makes a case for the similarity between NDEs and alien abduction experiences. There are likewise connections between alien abduction, NDEs and the aforementioned OBEs, or Out-of-Body Experiences.

Those three areas of study also dovetail nicely with what we have learned from the study of Past Live Experiences, or accounts, often also obtained from people under regressive hypnosis, of the historical details of former lives that serve as proof of reincarnation. Fowler offers the notion that reincarnation, while it is also not a fundamentalist Christian belief, does give comfort to many people who prefer to believe that human existence extends over many lifetimes and is part of a kind of evolution of the soul, a “becoming” that consists of more than just a one-shot attempt at getting the business of living right.

Another crucial component of Fowler’s scheme of reality is synchronicity, a phenomenon he devoted an earlier book to called “Synchrofile.” Part of his thesis is that meaningful coincidence and the apparently nonrandom order of events show us that reality is arranged by some higher force that does not, as Einstein said, “play dice with the universe.” Nothing is left to chance, perhaps, but human consciousness still perceives its reality through a veil of free will.

In “UFOs: The Ultimate Abduction,” Raymond Fowler has stitched together a continuum of phenomena whose elements harmonize beautifully and serve to make a wonderful kind of sense out of our admittedly limited glimpses into the Ultimate Truth. Perhaps it is his mission not only to learn the lessons God has laid out for him but to teach them to the rest of us as well.