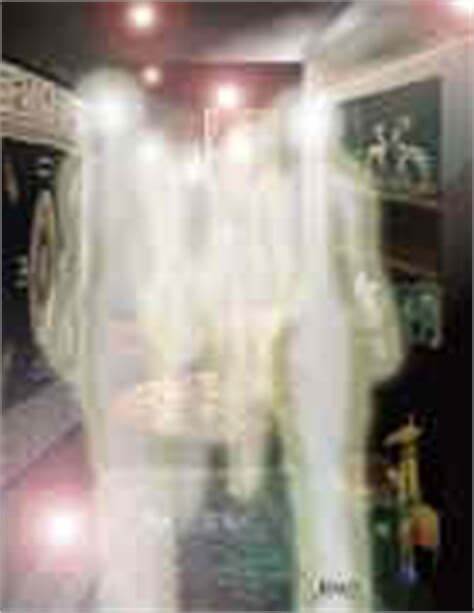 This race is the origin of the stars near Arcturus.

Some stand more than 8 feet tall, run 40 mph and live 800 years. They speak like a dog barking or a bird chirping, write similar to Egyptian hieroglyphics and have learned English quite easily. They have large blue eyes that wrap part way around their heads, small noses and tiny ears pressed tight to their scalps. Their thumbs are small with four long slender fingers. Their skin is completely white, like chalk.

They all have thin, straight blond hair. Their hips are shaped liked ours, but they walk quite differently since they are used to a stronger gravity pull. They typically can be seen wearing aluminized chalk white jump suits resembling a canvas-like fabric with gloves of the same material and an open white motorcycle helmet.

What’s unusual is the suit emits a three-inch field of white fluorescent light, the intensity varying from soft to bright, a brightness that can actually hurt the human eye.

They are extremely intelligent and process information speed several times faster than humans. They have individual talents, differing intellectual capabilities and physical traits. Some are teachers, some are pilots, some are workers and some are leaders.
Normal speech sounds “like a dog barking or a meadowlark singing”. However, some Tall Whites can mimic human speech and in fact carry on normal conversations with humans. Some have demonstrated an ability to imitate specific humans so well that the imitation cannot be detected when used over a telephone.
They also can use a device that projects speech so that it is heard by humans within their head. This works only over a short range (several feet) and requires the human to turn the head sideways to the Tall White.
The device is also a language translator. According to its settings from time to time, Hall was occasionally able to overhear Tall Whites conversing among themselves as though they were speaking English.

They like to recreate, procreate and their children, considerably shorter in size, are fun loving, energetic and inquisitive. The children enjoy hide and seek but they also like to play catch with soft objects since their bodies are frail, bruising easily. Mothers are highly devoted to their children to the “Nth” degree, existing solely for the purpose of meeting the needs of their offspring.

Every Tall White adult carries a pencil-like weapon that can be set to stun, kill, immobilize, or «hypnotize» humans. It can also administer severe pain, and they frequently use it to discipline people who act in ways that annoy, frighten, or endanger them. The weapon’s actions and effects are accomplished by varying the frequency of focused microwaves to interact with specific ions in the human body.
Although their technology is quite beyond ours at this time, evidence suggests that by other and less tangible measures — «wisdom», «intelligence», «moral stature» — they might be quite comparable to ourselves.

Among the interesting matching characteristics of the Tall Whites and the Imdugud: