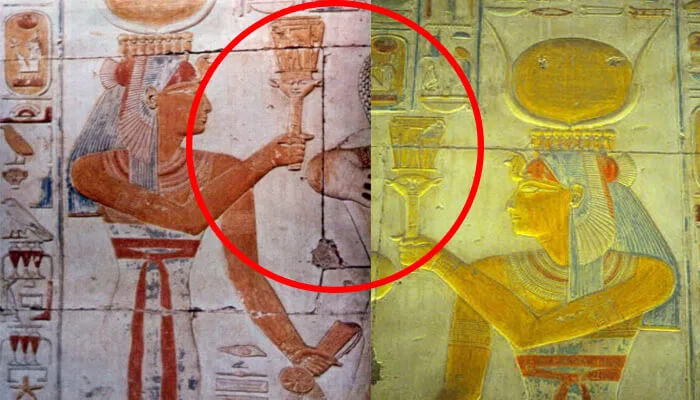 The Sistrum was a musical instrument that was used by the gods. could it be a tool to open portals and control the weather in Ancient Egypt?

In ancient Egyptian culture, the sistrum was one of the most sacred musical instruments. This was used, not only for entertainment or recreation but was used for religious purposes.

Its magical properties were believed to be much greater than previously believed. using sistrum they could improve the weather, calm dangerous deities, and create portals. Possible alien technology?

The Ancient Sistrum: A Magic Instrument?

The sistrum is represented alongside various deities. For example, Isis and Bastet were painted with one. However, this instrument is more associated with Hathor, the deity of the firmament and the lady of the stars.

This instrument was officially used in the worship of this goddess, as it evoked joy, festivity and fertility. In most representations of Hathor, she holds the instrument in her hands.

It is believed that the instrument was used by the gods to placate the Nile River and prevent flooding. In addition, its sound could scare Seth, the god of the desert, storm, and violence.

In fact, the Greek historian, Plutarch, wrote in his essay “On Isis and Osiris” that the sistrum plays an extremely important role in Egyptian worship. This did not serve only as an instrument but had an extremely deep and powerful symbolic connotation.

Plutarch mentions that the sound of the instrument symbolizes the fact that all existing things must be shaken, so their energy will awaken and they will function .

With the sistrum, an attempt was also made to calm natural disasters. It was also the way to thanks the gods. it was even used for repelling evil deities.

Technology from another world?

So far, there are two forms for this instrument, the oldest was the “sistrum naos”, which possessed the head of Hathor and was placed in a small shrine.

Normally, Hathor’s head was on its hilt, incorporating a pair of cow horns.

In Greco-Roman times, another type of sistrum , known as sekhem or sekham , became popular . This sistrum had an arch shape, simple and made of metal. The shape of this was more like a horseshoe.

Scholars of Egyptian mythology and theorists, assure that the ancient Egyptian sistrum could grant the gods the possibility of entering and leaving from one place to another. This is presumed to be the reason why the instrument is found in the “false doors” of temples.

Thus, it is suggested that there is a possibility that the instrument has been used to open portals. So it could be some kind of unknown ancient advanced technology.

Today, murals and other records can be found showing Isis’s priests and assistants wearing a sistrum.

This has also led to the belief that its sound could lead to a trance state, where priests were able to communicate with gods or beings of another dimension of consciousness.

Who did they communicate with? There are different hypotheses that mention the possibility that they were beings from other worlds.

A tool that was supposedly much more than a simple musical instrument, and that plays a role of great importance for mythology. Could it be alien technology?

What do you guys think? Leave us your comments below.