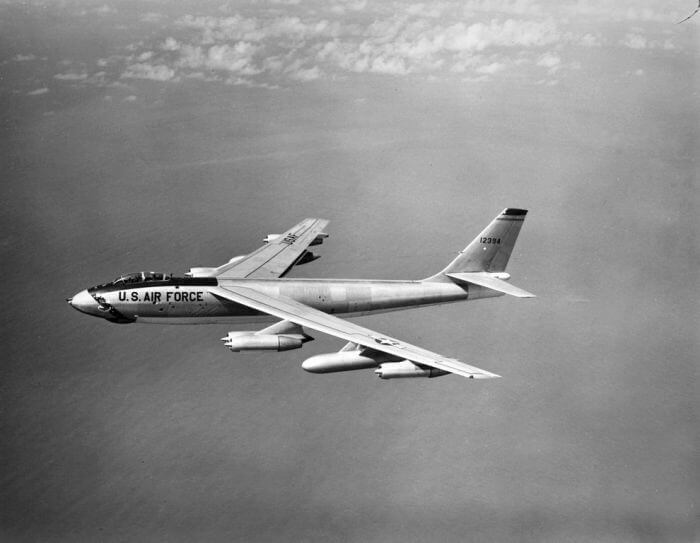 On February 5, 1958, the United States Air Force dropped a 7,600 pound nuclear bomb into the water off the coast of Georgia. The crew of the B-47 bomber didn’t drop the bomb by accident. They dropped it in order to survive.

The B-47 bomber was flying a top-secret simulated combat mission from Homestead Air Force Base in Florida. The airplane was carrying a single Mark 15 thermonuclear bomb to make the training as realistic as possible. The bomb contain highly enriched uranium and 400 pounds of high explosives. The plutonium core that would have triggered a nuclear reaction had been replaced with a dummy lead core.

F-86 fighter aircraft were also involved in the exercise and were tasked with intercepting the bomber. Something went terribly wrong, however, when one of the fighter jets didn’t see the bomber on radar. The fighter jet collided with the B-47 at 38,000 feet and knocked out its engine and put a huge hole in the wing. The F-86 had its left wing sheared off.

Colonel Howard Richardson was at the controls of the bomber and managed to get the aircraft leveled out at 20,000 feet, but he had to make a decision. He decided the best course of action for him and his fellow crew member was to jettison the heavy load they were carrying to make the aircraft lighter for an emergency landing as well as to prevent an explosion. When he got off the coast of Savannah, Georgia, near Tybee Island, he dropped the bomb in the water before successfully landing at Hunter Air Force Base outside of Savannah. The pilot of the F-86 fighter jet, Lieutenant Clarence Stewart, also survived when he successfully ejected from his aircraft and landed safely in a swamp. Colonel Richardson was awarded the Distinguished Flying Cross after the accident.

The Navy searched for the bomb for a little over two months but was unable to find it. It was believed the bomb was buried under 5 to 15 feet of silt. Since that time others have tried to locate the nuclear bomb but have been unsuccessful. But the incident hasn’t been without some additional controversy. A letter to the chairman of the Joint Committee on Atomic Energy in 1966 sent by W.J. Howard, the assistant to the Secretary of Defense, wrote that four nuclear bombs had been lost and never recovered. The lost bomb at Tybee Island was one of two bombs that were said to be a full weapon with a nuclear capsule. The other bomb was one that had been lost in the Western Pacific in 1965 and had never been recovered. A 2001 Air Force study debunked the letter and said it was false. The report also concluded that if left undisturbed, the nuclear bomb posed no risk to the environment and there was no possibility of a nuclear explosion.

The nuclear bomb still sits somewhere in the water off  Tybee Island and is not completely benign, however. It still holds 400 pounds of conventional explosives and highly enriched uranium. That is why the Air Force has said the bomb is better off just being left alone.