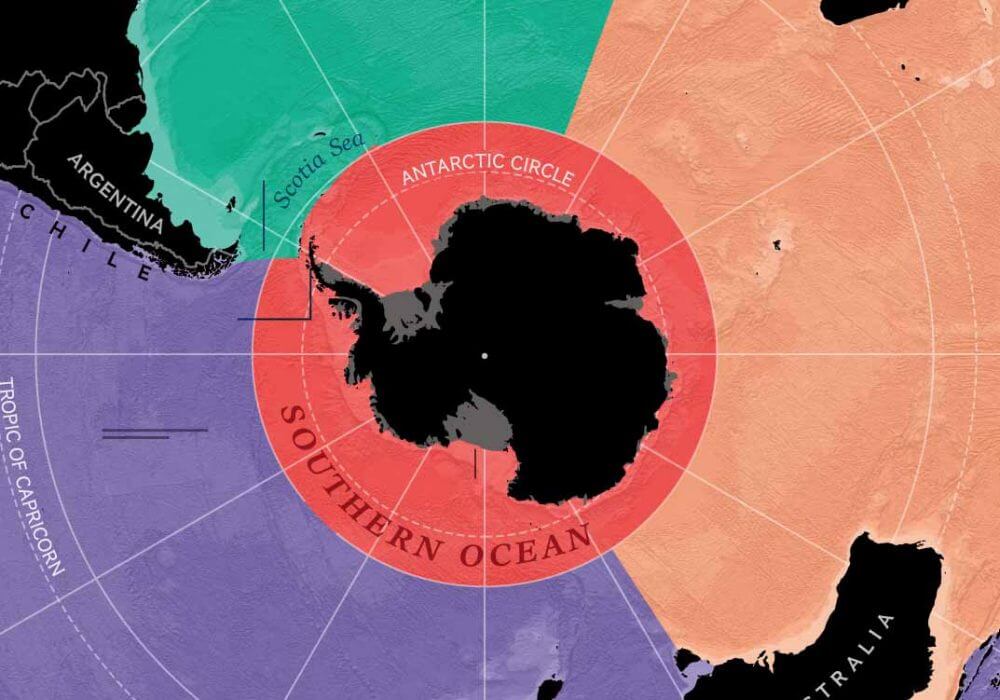 In 2000, the International Hydrographic Organization created the fifth and newest world ocean — the Southern Ocean — from the southern portions of the Atlantic Ocean, Indian Ocean, and the Pacific Ocean. The new Southern Ocean completely surrounds Antarctica.​

Are There Really Five Oceans?

For some time, those in geographic circles have debated whether there are four or five oceans on Earth.

Some consider the Arctic, Atlantic, Indian, and Pacific to be the world’s four oceans. Now, those that side with the number five can add the fifth new ocean and call it the Southern Ocean or the Antarctic Ocean, thanks to the International Hydrographic Organization (IHO).

The IHO Makes a Decision

The IHO, the International Hydrographic Organization, has attempted to settle the debate through a 2000 publication that declared, named, and demarcated the Southern Ocean.

The IHO published the third edition of Limits of Oceans and Seas (S-23), the global authority on the names and locations of seas and oceans, in 2000. The third edition in 2000 established the existence of the Southern Ocean as the fifth world ocean.

There are 68 member countries of the IHO. Membership is limited to non-landlocked countries. Twenty-eight countries responded to the IHO’s request for recommendations on what to do about the Southern Ocean. All responding members, except Argentina, agreed that the ocean surrounding Antarctica should be created and given a single name.

Eighteen of the 28 responding countries preferred calling the ocean the Southern Ocean over the alternative name Antarctic Ocean, so the former is the name that was selected.

Where Is the Fifth Ocean?

The Southern Ocean consists of the ocean surrounding Antarctica across all degrees of longitude and up to a northern boundary at 60 degrees south latitude (which is also the limit of the United Nations’ Antarctic Treaty).

Why the Need for a New Southern Ocean?

A great deal of oceanographic research in recent years has been concerned with ocean circulations.

At approximately 20.3 million square kilometers (7.8 million square miles) and about twice the size of the U.S.A., the new ocean is the world’s fourth-largest (following the Pacific, Atlantic, and Indian, but larger than the Arctic Ocean). The Southern Ocean’s lowest point is 7,235 meters (23,737 feet) below sea level in the South Sandwich Trench.

The sea temperature of the Southern Ocean varies from negative two degrees C to 10 degrees C (28 degrees F to 50 degrees F). It is home to the world’s largest ocean current, the Antarctic Circumpolar Current. This current moves east and transports 100 times the water flow of all the world’s rivers.

Despite the demarcation of this new ocean, it’s likely that the debate over the number of oceans will continue nonetheless. After all, there is but one “world ocean,” as all five (or four) oceans on our planet are connected.