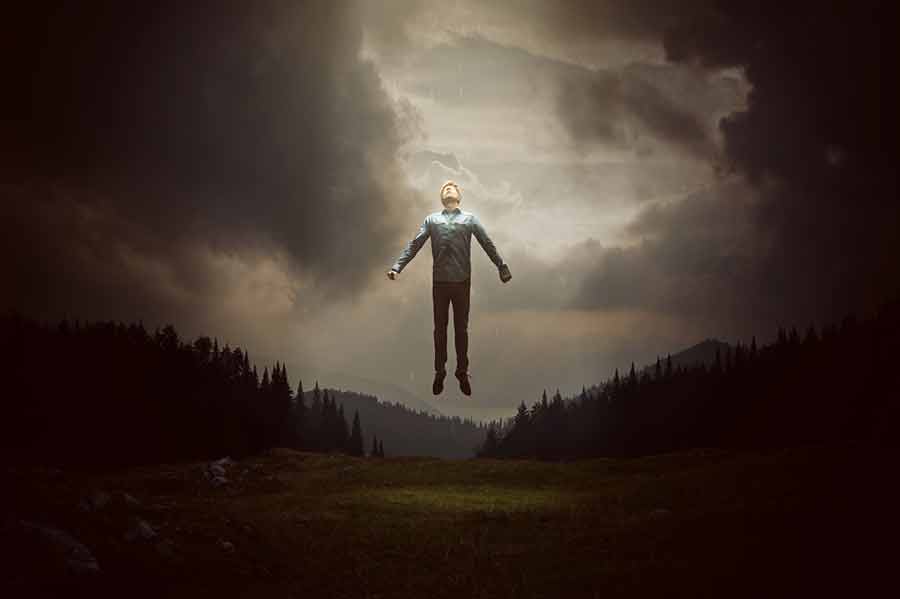 In 1884, a 27-year-old man named Raynard Beck lived in the quiet picturesque town of Dexter, Missouri (USA). He lived on a farm with his mother and brother Samuel and worked hard every day to earn his bread and butter. The work was very hard and gave very little profit, the family could hardly make ends meet.

One of the most common human desires is to fly. The fascination of flying in the sky has been an almost irresistible subconscious force throughout human history, with constant inventions to achieve this goal and constant flight in our dreams.

Throughout history, there have been people who have claimed that they have the ability to fly without special devices or mechanisms, that is, by themselves – this is called levitation.

They did this by defying the laws of gravity and physics, flying into the air without assistance and only with the help of their mysterious abilities.

Such cases are numerous all over the world, myths and legends are composed about them, and some such people lived very close to our time. This story is about a man who was neither a religious leader, nor a saint, nor a mystic, but just an ordinary farmer who, one day, suddenly mastered the gift of flying.

The Levitation Powers Of Raynard Beck

One day, as usual, Raynard Beck left early in the morning to work in the fields, in the evening he returned home, as always very tired, ate, and went to bed. The next morning he woke up with an unusual sensation in his body – pain from hard work in his back and legs disappeared and he felt very vigorous and energetic.

Struck by his complete sense of well-being and the sudden absence of pain in his normally constantly exhausted body, Raynard jumped out of bed, ready to start a new day at work, but that’s when something really strange happened. Instead of standing up, Raynard Beck found that his feet were not touching the ground and that he was floating in the air just off the floor.

For a few moments, he hovered above the floor, and then began to climb higher and higher, straight to the ceiling, and eventually hit the ceiling, much to his fear and amazement. At first, the man thought that he was just dreaming all this, but the longer he hung from the ceiling, the better he understood that this was not a dream after all, but a real reality.

Raynard Beck somehow managed to get down, after which he sat down on the bed, gripping the headboard so that he would not be lifted up again, and so he sat for a while, trying to realize what was happening. After a few minutes, he tried to get up and walk again, but his legs came out from under him, and he again began to levitate in the air.

At this time, his mother called him to come down for breakfast, and he shouted that he would soon be there, but he knew that he could not go down there in such a weightless state. Raynard pushed himself down again, then took his leather belt and tied two large lead fishing net weights to it. After that, he tied a belt with sinkers on his belt and was satisfied with satisfaction that he now was not floating away to the ceiling.

Now he could step on the floor, although he still had to do it all very carefully, because his legs were trying to “float”. After some practice, he somehow managed to adapt to this way of getting around. By this time, his mother had already called him for breakfast several times, and Raynard finally went downstairs to the kitchen.

As he descended, he was seized with fear at the thought that his mother and brother would think about his flights. His family and the townspeople in general were very religious and God-fearing Christians, and he thought that if anyone saw what he was capable of now, they might think he was possessed by the devil. Therefore, he decided not to tell anyone about anything.

Raynard went downstairs, had breakfast, trying to move as naturally as possible, and then went to work on the field. The next morning, he hoped that the strange obsession would pass, but everything remained the same – without a belt with sinkers, he was irresistibly pulled up.

After a few days, Raynard got used to moving around in this way, and at night he tied himself to the bed so as not to fly off to the ceiling. This went on for over a week until his secret was finally revealed.

This happened when Raynard was in his room that evening, experimenting with his newfound powers. He bounced off surfaces, moving through the air and testing how fast he could move and how he could stop. At some point, Reynard’s older brother, Sam, unexpectedly entered and caught him red-handed.

At first, Sam thought that his brother was doing a trick with the ropes, but soon he was seized with amazement and considerably scared when he realized that there were no ropes. Raynard somehow managed to calm down the frightened Sam and convince him that this was not the machinations of the Devil. And then Reynard came up with the idea that he could make good money on this superpower.

Later, Raynard and Sam told their mother about everything and it took them a very great effort to get her to believe that this is not demonic and not an obsession.

After a while, Raynard began to stage performances in front of the public. During the show, he used special metal handrails to move around his marquee above the astonished audience, or simply hover in the air doing ordinary things like reading a book or drinking a cup of coffee.

For the villagers, it was all fantastic and the show became very popular. Of course, most people saw this as a trick or an illusion, but they also believed in levitation when one day a group of skeptics decided to expose the “crook” and tore up Reynard’s tent, suspecting that mechanisms with ropes or wires were hidden inside it. However, there was nothing inside, and Raynard continued to calmly levitate in the air.

In the following months, there were even more such skeptics, but none of them were able to “expose” Reynard. The people more and more often said that he was indeed endowed with unusual strength and was able to fly like a bird.

One journalist from The Kansas Star tried to figure it out, convinced that it was a fraudulent case, but after attending Raynard’s shows, he became convinced that the levitation was real:

“Before the show, I searched the marquee carefully for wires, hydraulic ramps, hidden supports for any device that might provide a clue to the mystery, but I found absolutely nothing. stick the air above and below him, but did not meet with resistance. With extreme reluctance, I came to the conclusion that he was in fact floating in the air. “

Raynard Beck, along with his brother Sam, who helped him at the performances, continued to perform in this way for another five years and no one could understand what his secret was. And in 1890, Raynard suddenly decided to stop performing and returned with his brother to his farmhouse.

Something clearly happened to him that remained unknown to us and that turned him into a social phobia. Raynard did not want to see strangers anymore and became practically a hermit. He refused to talk to journalists and refused to show his flights in front of crowds of people who for a long time specially came to his house and asked him to fly for them.

Through the closed door, Raynard often spoke to reporters and fans the strange phrase “Once a person is in the air, he can never be the same person as before.”

And then they stopped seeing him altogether, he never even left the house.

There were many rumors about what happened to Raynard Beck. First, they said that he lost his powers as suddenly as he gained them, and hid from shame. Secondly, someone assured that he allegedly once decided to go outside and took off his belt, after which he simply climbed up until he disappeared from sight.

Journalists completely stopped writing about Reynard Beck after his sudden departure and the truth about what happened to him, we probably never know. We can only guess how true this story is?

Was Raynard really capable of levitation, or were they really elaborate magic tricks? Whether it is real or not, it was definitely a very strange case.