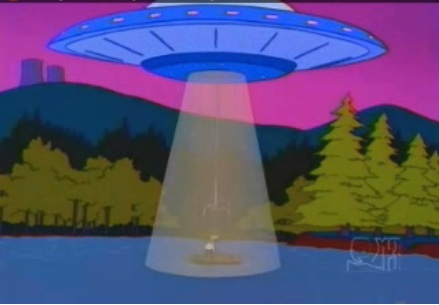 Artist’s rendition of a flying saucer’s abduction of a young cow.

When five cattle were found mysteriously dead on a Oregon ranch last summer, the authorities found themselves baffled. The animals, prowling around in a remote part of country, had been mutilated and drained of blood. Body parts like tongues and genitals were completely removed. A sheriff’s deputy, Dan Jenkins, dismissed the usual suspects of wolves and other natural predators. None of the cattle were shot, ruling out human intervention.

In an interview with NPR, Jenkins noted that a lot of locals blamed the butchery on aliens: “One caller had told us to look for basically a depression under the carcass. ‘Cause he said that the alien ships will kinda beam the cow up and do whatever they are going to do with it. Then they just drop them from a great height.” Whether the extraterrestrials drop cows from great heights out of a sense of sadism, scientific curiosity, or just altruism, is uncertain. The strange episode is certainly reminiscent of a wave of cattle mutilations in the Midwestern and Western United States during the 1970s.

During this time, there was a flood of reports about cattle and other livestock being killed and mutilated on small farms. An October 1975 article on the subject in The New York Times opened with the question, “Who has been killing cattle in Colorado and at least 10 other states the last few months?” Scientists and the Colorado Bureau of Investigation attributed most of the deaths to natural causes. There were essentially three, however, more colorful theories that overlooked blowflies, bears, and coyotes.

Some pinned the blame on aliens, an idea that has remained popular to this day. Others suggested secret government experiments, because clearly leaving horrifically maimed cow carcasses in the wild wouldn’t draw anyone’s suspicions. A third school of thought, begging for a “grounded” solution, pointed to a Satanic cult. The humble theoretician behind this postulation was Albert Kenneth Bankston, an authority on bank robbing who was serving time for his field in a Kansas federal penitentiary. In 1974, Bankston began writing letters to Ross Doyen, a state senator interested in the mutilations.

According to Bankston, the culprits leaving behind thousands of dead, mutilated livestock were the members of a dark cult called the Sons of Satan. The cultists drained the cattle’s blood via hypodermic needles, and cut off their genitals to use in fertility rituals. In addition to their cattle mutilating, the cult kept themselves busy with drug-dealing, murder, and other unsavory hobbies. Doyen, bewildered and enlightened, passed the information off to paranormal researcher Jerome Clark, who also started up a correspondence with Bankston.

The bits and pieces from Bankston painted the image of a wealthy, ambitious cult that wasn’t content with just terrorizing farm animals. Bankston claimed that the Satanists were made up of bikers, criminals, and millionaire stockbrokers, and their plans included stealing a nuclear missile and assassinating journalists and politicians. In an age when a crazed Folk Singer and his followers attempted to set off a race war only five or six years earlier, Bankston’s story was treated seriously by the authorities. Donald Flickinger, an investigator from the U.S. Treasury Department, was tasked with checking into the former bank robber’s allegations.

Aided in testimony by his pal Dan Dugan, a gentleman reposing in a Texan prison, Bankston happily squealed in exchange for being moved to a small town jail. Together, Bankston and Dugan regaled Flickinger with detail after detail about the Satanists. The members of the cult were not only involved in animal abuse, but human sacrifice as well. They drugged and pacified their victims with PCP, walking around with cardboard on their feet so they wouldn’t leave footprints. When they were finished, the cultists escaped on helicopters, ensuring that they wouldn’t leave a trace at the scene. (And that the mutilations could be blamed on UFOs).

Their revelations were elaborate, but neither Bankston nor his friend had any evidence to prove they were based in reality. Dugan reported that he was once part of the cult, and had been controlled with drugs. He said that he watched the group kill four teenagers in 1969, dumping their bodies at Lake Cozad in Nebraska. After digging up the spot, however, the authorities couldn’t even find a piece of cardboard. It was obvious that nobody had been killed at the spot, and increasingly evident that Bankston and Dugan were just making things up and passing around rumors.

Albert Kenneth Bankston also kept on insisting to be transferred to smaller prisons. He insisted that the cult wanted to silence him for knowing too much, but Bankston’s real motivation was to get into a less secure location. After being transferred several times, Bankston decided to ditch the slammer and escape. He was caught only a few hours later, while Dugan’s own attempt in Texas wasn’t much successful either. Much to the government’s annoyance, the Bankston connection was a complete hoax.

Based on a study of cattle mutilations in New Mexico, FBI agent Kenneth Rommel argued in a 1980 report that the hysteria was overblown, and that the attackers were natural predators. This ended government interest in the phenomenon, although some farmers and local law officers continued to insist that something strange was afoot. The public belief in the Satanic cult theory died down as well, with pop culture associating the mutilations with little green men instead. It seems, going into the 1980s, the Satanists shifted gears, spending their time hanging out at daycare’s, kidnapping children, and killing giraffes.

Please remember we all have different opinions, Think Before You Speak or Write Something that is cruel to Others. After all, We are only Humans. Wishing you clear skies and wide eyes. To share your experiences or just leave a comment there is a area below. Read or listen. We are the change the world has been waiting for! Have you witnessed an unidentified flying object? You are not alone. Whether you think UFOs are black projects, extraterrestrial craft, something else altogether, or just don’t know, again: you are not alone! Unconditional love. The road we all get to walk. Unconditional love is like the sun. WE ARE THE DISCLOSURE !!! ~~~ WE HAVE NEVER BEEN ALONE!!! LOL=Love and Regards, Happy Quarantine ! Thank You, Nancy Thames : )