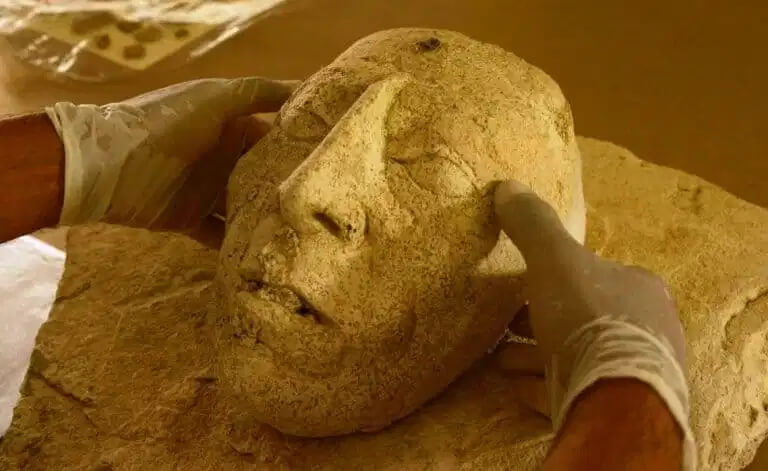 Ancient artifacts of gods and rulers have always been fascinated due to their unique looks and body shapes. Thousand-year-old elongated skulls have puzzled researchers for their different appearances. Ancient astronaut theorists believe that such evidence could be a sign of extraterrestrials. A few years back, archaeologists from the National Institute of Anthropology and History discovered the mask of Mayan ruler Pacal the Great (K’inich Janaab ‘Pakal) at the ruins of Palenque Palace, Mexico.

He was only 12 years old when sat on the throne of Palenque in 615 CE and ruled successfully until his death at the age of 80. He is said to be the 7th ruler at such an early age. He built this modest-size Mayan city and turned it into the advanced urban place of Mesoamerica. Although there were many ancient rulers, Pacal not only impressed historians because of his ruling period but also his long nose baffled them.

Pacal’s mask found at the Palenque Palace was made of stucco (construction material made of aggregates, a binder, and water). Archaeologist Arnoldo González, head of this research said: “Knowing that Pacal The Great ruled until his death at 80 years of age, and that the stuccoed face looks precisely like an old man, it is very likely that the sculpture symbolizes it. It should be noted, unlike other Mayan sites where the representations are generic, in Palenque, many of the features that we see in wall paintings or stone carvings are faithful reflections of specific characters.”

The researcher himself clarified that the sculpture found at the site is the representation of real people. But they ignored discussing his long weird nose that begins all the way from the forehead. Looking at the other ancient figures, Pacal is not the only one with an elevated nasal root, this feature could also be seen in the ancient figurines excavated on the Jaina Island, an ancient Maya burial site of around 20,000 graves.

These ancient Jaina figurines share a similar nasal feature to Pacal. Researchers always prevented themselves to talk about this unique facial feature in the ancient rulers. But those who talked considered it cosmetic surgery. Unfortunately, scientists never found any sign of surgery in the skeletons.

In 1952, in Mexico, among the ruins of the ancient Mayan city of Palenque, a tomb with the remains of Pacal the Great was discovered, whose skull was covered by an amazing jade mask. The inscriptions on the walls of the burial chamber said that the body belonged to the ruler of K’inich Dzhanaab Pakal.

The best logical explanation is some highly advanced civilizations in the past manipulated the DNA of humans. They were capable of genetic engineering. If it is true, then could it be possible that they were not from Earth?