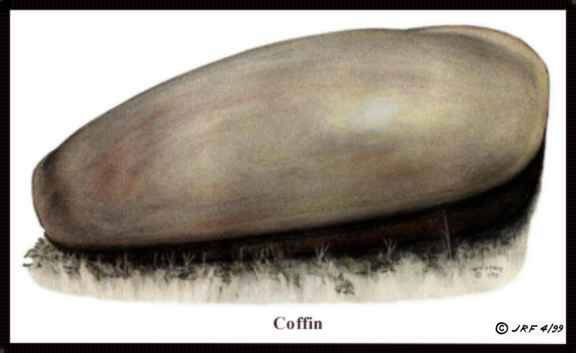 Many of my so-called UFO encounters were short and simple. And many of them occurred during my teen years, especially the more important mysterious experiences.

A short encounter with The Coffin while practicing football

Here is a short simple encounter with a UFO during football practice…about 5 pm, Fall 1954.

I was in high school, Northeast High in Lincoln. However, we did not see it flying.

While practicing football one afternoon, on the north practice field at Northeast High School in Lincoln Nebraska – in the fall of 1954 (I believe) – one of our offensive running backs tried his luck at “drop kicking” a field goal (an accepted method for scoring three points in those days). He sent the ball sailing high, dead center, right over the uprights. He kicked it so far, it landed out of sight down a slope behind the goal posts.

Well, our coach asked for volunteers to go get it. So about four of us began running down the slope. As we approached the ball, we were startled by what appeared to be a very gray-brown weathered coffin-type object sitting near it. We noticed the coffin had four legs, but we also knew well that it didn’t belong there. With a few comments about what strange enclosure might be, we grabbed the football, ran back up the slope and gave it to our coach, who for some reason really didn’t want to take a look at what we saw. With that we continued our practice and gradually forgot the entire short incident. I don’t believe we mentioned a word about it after that.

It is interesting to note that I saw a Middle Age oil painting of what seemed to be the exact same coffin-shaped object during Robert Dean’s lecture at a late 1980s or early 1990s Rocky Mountain Conference On UFO Investigation in Laramie, Wyoming. Bob said the artist was from the Middle East and he apparently identified the bizarre object as “a column,” one of Ancient Egypt’s flying boats. It is also interesting that I have seen “the coffin” at other times…even flying in distorted atmosphere…or more accurately described, floating somewhat high in the air and low to the ground…like a submarine floats beneath the surface of the water. (Robert Dean is a retired military officer who I’ve met, who was stationed in Europe during the Cold War to monitor, through NORAD radar, the activities of Russia. He apparently discovered unidentified flying objects that were active during the some of the nights when Russia would have their air force drills.)

It’s also interesting that I’ve read in an early UFO book, a book that was published in the 1970s or 1960s I believe, that described the landing of a UFO on the front deck of a ship at sea, sometime about 1940. The witness or witnesses that saw it said that it looked like a container (what could be coffin-shape) and I believe the witnesses said that it also looked like a huge “clam.” He or they were startled even more when they saw “the clam” fluctuate, giving off strange guttural sounds. This is similar to some of the craft that I saw several times, particularly near wetlands. They sometimes sounded like or were mimicking the sounds of frogs…believe it or not. This happened at least a few to several times over the entire 46+ years.

Another encounter with “The Coffin”

Not too tall, with thick black hair and horned rimmed glasses, Ronnie Ladeger seemed to be a wonderful young man. There was an innocence about him; he always seemed to have a good time and felt the goodness in life. His father, equally kind, owned an oil distributorship in the small town of Weeping Water. Weeping Water lay nestled among limestone hills, between Lincoln and Nebraska City.

Fall 1957: Attending college at the University of Nebraska, I had met Ronnie in my anthropology class. We seemed to hit it off, so to speak, and soon became good friends…as well as golfing buddies.

I especially enjoyed the tall hardwood trees bordering each fairway and green on the small, beautiful course at Nebraska City. Fairway #2 paralleled #3, and we were playing #3.
Hitting our balls down the middle of the fairway (an oddity by itself), we strolled along making casual conversation. Suddenly, Ronnie let out a gasp, then simply yelled, “What is that.”
Pointing over toward fairway #2, he seemed puzzled and frightened. His father talked about what he saw.

Turning, I casually observed a medium sized object sitting on the ground, in the middle of fairway #2. But, as I got a better look at it, it suddenly appeared strange, like a rectangular coffin. It was being held just above the ground by four thin legs, two on the front and two on the rear. It looked medium gray and weathered, about as large as a sports car. I soon realized it definitely didn’t belong in that location.

I noticed a faint distorted atmosphere fluctuating around the object. Since the shock of seeing this took our breath away, imagine how we felt when the coffin rose a foot or so above the ground and moved slowly down the fairway. Oddly, I noticed the legs remained extended. We got completely flabbergasted. The object settled to the ground at the end of fairway #2.

Forgetting our golf game, we walked over to get a closer look at the object. Moving in close to it, Ronnie and I encountered a rather startling effect. Every time we got near the object, we felt a strange force pierce our bodies. It seemed an electric or magnetic field surrounded the object. We talked about this and presumed the field of force caused the distorted atmosphere.
A pre-engineering student, I tried to sound intelligent and studious about what I saw, but Ronnie’s dad made the most astute observations.

I suddenly got even more perplexed because the force began to effect my thinking; I felt disoriented and a little ill at times. Ronnie said he also felt ill and disoriented. He touched the object two or three times and jumped back each time. We really didn’t know what to make of it.

Suddenly, I clearly saw buildings with people around them. It seemed completely bizarre because I knew no buildings were located along fairway #2. A strange distorted atmosphere surrounded the buildings. I felt the object or force had caused me to hallucinate.

Completely puzzled, we stayed near the coffin. Then we suddenly realized a lot of time had passed and decided we should finish our golf game. We strangely left the object sitting on the ground and continued the golf game. Slowly approaching green #4, we forgot the object…i.e, until my 1986/1987 “flood of recollections.”