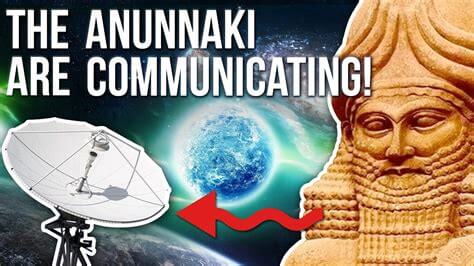 The Anunnaki are Communicating! – Cosmic Harmonious Frequencies & Free Energy Through Crop Circles! In 2010 at Poirino, Italy the precise number of “stars” in a crop circle formation picture specified the famous equation Albert Einstein E = mc2 in decimal ASCII code in a Crop Circle. A similar crop picture which appeared near Poirino, Italy on June 20, 2011 shows at its center a large seven-pointed star, Even more interestingly, a series of seven rays along the outside of that new crop picture at Poirino are written in eight-bit ASCII code, and seem to identify the crop artist as “Ea” or “Enki”, who was a extra-terrestrial god in ancient Sumeria. According to ancient legends, he and NINGARHSAG created modern humans by hybridizing sperm from the male gods with eggs taken from local aboriginals, already living on Earth tens of thousands of years ago. The precise ASCII code which was drawn at Poirino goes as follows, reading clockwise around its large seven-pointed star: 01000101 E 01100001 a 01000101 E 01101110 n 01101011 k 01101001 i 00100000 space Now check this out! These two Crop Circles encode the most harmonious cosmic frequency harmonics! Let me explain. Today’s quantum physicists say that all physical matter consists both at the same time as wave and Particle. The Anunnaki have encoded the most harmonious frequencies related to both Wave and Particle Cosmic Physics in these two crop circles! But E=MC2 does not have a “Frequency/Wave Component in it’s equation. Or does it? E = Energy M = Mass C = Speed Of Light The 2010 E=MC2 Crop Circle features a Six-Pointed Star which relates to and is created by a D = 36 Hertz frequency as provable through Cymatics. The equivalence of energy (E) and mass (M) is reliant on the speed of light (C) squared and is described by the famous equation. The speed of light is 186,000 miles per second. Here is the kicker though, 432 Hz squared is the speed of light! (less than 1% accuracy) And it’s the 432 Hz based Seven-Pointed Star (27 Hz – 4 Octaves below A= 432 Hz) that is encoded into the Enki-Ea Crop Circle, they are related! So (C) in the Einstein E=MC2 equation can also be thought of as 432 Hz squared, which now brings in the frequency component! “When Scientists learn that the seven-pointed star has a forward progression and recreates itself infinitely as a whole unit, there will be huge leaps in the progress of man.” – Bear Bearcloud With the Enki Crop Circle we now know Enki of the Anunnaki has been presenting us and guiding us with the importance of 432 HZ and it’s 4 octave below 432 Hz (27 Hz) (Diapason A 432 Hz) in the form of the seven-pointed star which is encoded into the Enki Crop Circle, they even created the babylonian World Map from it! Throughout history, numerous clues and hints regarding geometry and frequency have been staring at us, calling to us, and waiting for us to put them into place like pieces of a giant puzzle. Here at the dawn of a new age, this sonic-geometric puzzle is finally nearing completion, revealing the building blocks of a language based on energy, frequency and form. How will we use it? With whom will we be communicating? Now that we know the basics of this new language, maybe we are ready to begin the conversation…. again? The numerical coincidences are too compelling…. All over the world and for thousands of years, humanity has revered certain number sequences: 108, 144, 360, 432, 1080, 2160. But why? What is it about these and many other numbers that jar something so deep within us that we incorporate them into our myths and spiritual beliefs? The answer could be frequency harmonics. We measure sound frequencies in vibration cycles per second, and the numbers listed above – when played as frequencies – just happen to mirror the exact harmonic patterns found in nature. The thing is, the timekeeping unit known as the “second” did not exist until quite recently in our history, so how could our ancestors have known about these harmonies? Here’s where the mystery really gets deep. You see, the 60-based mathematical system that led to the creation of the second is not only thousands of years old, it was supposedly “gifted” to humanity from “Heavenly Visitors Who Came From the Skies”……….the Anunnaki!