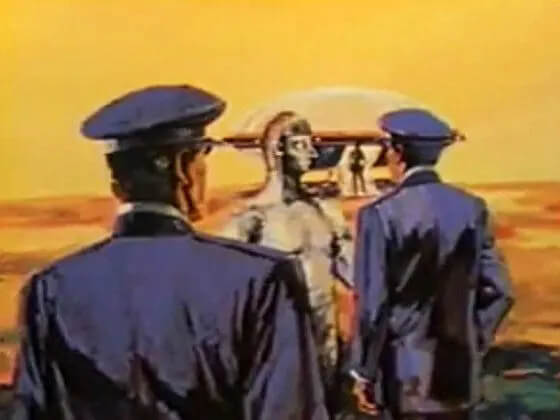 If there is a government cover-up as there appears to be, the most impressive and convincing evidence on extraterrestrial visitation to our planet remains under lock and key at the Holloman Air Force Base

A curious case that could serve as a piece of evidence to the above, comes from 1973 when a Hollywood producer and his investor came across the story of a supposedly astonishing piece of footage: the evidence of an alien ship landing

The filmmaker in question is Robert Emenegger, a Los Angeles producer and songwriter, who made his way to Norton Air Force Base in San Bernardino County, California, along with a well-connected businessman and partner named Alan Sandler.

Although an Air Force Base seems like a pretty strange place for these two to go, they had a very good reason, as Emenegger was trying to put together a documentary on Air Force advanced research projects and technology, and had been invited there. by the commander-in-chief of the Special Investigations Division and the head of the intelligence department, Paul Schartl.

Soon a simple meeting turned into something strange.

The men reportedly spent some time discussing various research projects the Air Force was conducting at the base and beyond, but things got really interesting when the topic of UFOs came up.

The officers in the room told him a very strange story about a UFO that supposedly landed at Holloman Air Force Base, New Mexico, in 1964. This craft arrived at the base at 6 a.m., and not only that, rather, its alien crewmen descended and spoke with high-ranking commanders and Everything was recorded on a video.

It should be noted that both officials at this meeting claimed to have seen the images for themselves. Schartl told the following about what was observed in the 16mm film:

Three disk-shaped flying objects arrived, one of which landed and the other two flew. In the landed UFO, a door opened, from which three creatures appeared. They were the size of a human. They had a strange, gray complexion and a pronounced nose. They wore tight-fitting overalls and headdresses that appeared to be communication devices, and in their hands they held a “translator.” Their eyes were shaped similar to those of a cat, the nose was clearly defined and their mouths were thin, just a line, with no chin.

A Holloman base commander and other Air Force officers came out to greet them.

Schartl also claimed that the meetings continued for several days, The spacecraft was parked in a hangar in the meantime and that during the alien meeting the entities eerily mentioned that they were monitoring an alien race they were unfamiliar with.

When Emenegger pressed for more information on what the aliens and the commander had talked about, the officials fell silent and offered only vague allusions to sharing technology and knowledge, and also said that the aliens were “medical, professional types.”

It was all incredibly intriguing, so at this point, Emenegger had already decided to make his UFO documentary. To his surprise, Air Force officials even agreed to let him use 3,200 feet of the mysterious footage.

He was even taken personally to the site where the aforementioned landing had occurred, as well as to the hangar where the UFO was kept, and the buildings where the meetings with these visitors from the stars had supposedly taken place.

It seemed too good to be true, despite the ominous warning that the movie should be viewed as a hypothetical setting and that they were by no means to claim that none of it was truly real. However, when Emenegger and Sandler left, they did so in high spirits, surprised that they would soon be able to see this mysterious footage for themselves.

When the days turned into weeks and the weeks into months with no more news, Emenegger decided to go to Wright-Patterson AFB and speak with one of his military contacts, Colonel George Weinbrenner.

When asked what had happened to the images, Weinbrenner changed the subject and began ranting about Soviet technology and MIG 25. As he continued his tirade, however, he produced a signed copy of the book The UFO Experience (by the famous J. Allen Hynek) from a bookshelf and showed it to Emenegger with a nod.

The filmmaker later explained that this strange monologue was just a cover to confuse anyone listening through microphones installed in the room and that the book was a silent confirmation that the footage existed.

Emenegger released his documentary in 1974, called UFOs: Past, Present, and Future  (narrated by Rod Serling, creator, and screenwriter of The Twilight Zone ), which later become a self-titled book. There, some suspect that a particular scene recreating what happened at Holloman, where a flying saucer is briefly shown landing, could be a tiny part of the footage that the military had promised for the documentary – although others point out that Emenegger never received the film. and that it could be an accurate reconstruction of what Major Paul Schartl told the filmmaker, as stated in the later book.

But in the end, there are many problems with this story. The first is that we only have Emenegger’s word to continue. The main source for this whole story is three pages of his book, and that’s it. There is no corroboration, there is no way to verify any of that, you just have to take their word for it.

Another problem is the question of why two high-ranking Air Force officers wouldn’t just tell this Hollywood filmmaker the whole thing, even promising access to part of the film about the fact. In an area where secrecy and dark cover-ups are the order of the day, why were they so upfront with these civilians?

Perhaps, just disclosing a fact without giving those informed the possibility of proving anything is a twisted way of covering up something that happened since nothing can be proven and this fact alone will cause more skepticism than credibility.

It should also be noted that what Emenegger recounted coincides – at least in essence – with what is observed in a series of videos published on the Internet in 2011, presumably related to a similar incident that occurred on the other side of the world, in the territory of the other world power, Russia.

Were there different alien races each bargaining with a different Earth power or is it all just a publicity stunt?