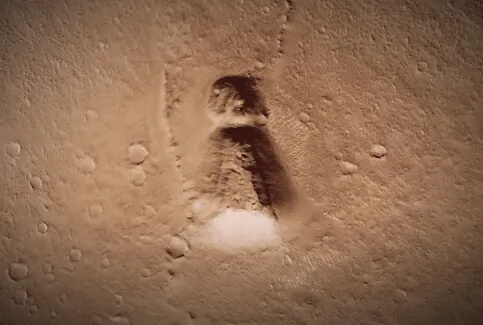 It has been 56 years since the world saw the first picture of the red planet. After analyzing the data and images received from Mars probes, the scientists discovered the signs of life on the Earth’s neighbor. There are many theories in the ancient text of different cultures that talk about entities from Mars. Is it true that Mars was once inhabited by an ancient civilization? There is no official answer to it, but the ancient alien theorists have much evidence to prove the existence of a Martian civilization.

In 2013, the author and founder of the Cydonia Institute George J. Haas found some anomaly on the surface of planet Mars while checking Mars photographs from NASA’s collection. He noticed a large formation protruding from the surface of the red planet. Haas found out that there were no other geographical features around this peculiar formation. This huge rocky part was symmetrical in nature and had a strange shape of a “keyhole.”

Hass doubted that the large emerged rock part was of a natural formation. In the field of astronomy, when scientists look for a sign of activity on other planets, they look for structural symmetry. And this photo could possibly initiate the fact that the keyhole formation is an artificial structure, probably made by extraterrestrials.

According to ancient astronaut theorists, this photo turned out to be a gem to prove that in ancient times, Mars and Earth were visited by the advance extraterrestrial race. They believe that a strikingly similar artificial formation exists right here on Earth, i.e. “Kofun.”

Kofun are basically the megalithic burial grounds that can be found in Northeast Asia. It is estimated that these tombs were constructed between the 3rd and 7th centuries. Interestingly, the largest Kofun that has a similar keyhole structure like on Mars is situated in Osaka, Japan.

The Daisenryo Kofun is among the hundred of these tombs that can be found overall in Osaka. But its formation attracted the researchers. This Kofun is 1,600 feet long and over 1,000 feet wide, encircled by three mounts that make the entire place covered up to an area of 5 million square feet that is larger than Egyptian pyramids.

Was it really made as a burial ground? Its enormous keyhole shape can only be seen from the air, then how could the ancient Japanese make it possible?

Now, the mystery is why these formations have a keyhole shape. Some researchers suggest that the answer to this question can be found in the ancient Japanese text known as “kojiki.”

According to that book, there is a story of a woman who was impregnated by a powerful god who came to her through a door’s keyhole, and then she gave birth to semi-divine children. There is another story in the text about the Japanese sun god “Amaterasu” who came to Earth from a celestial plane. Interestingly, ancient alien theorists accounted for the mystic place called “Takamagahara,” which is mentioned in kojiki. In Japanese mythology, Takamagahara means a resident of heavenly gods that is located in the sky connected to Earth through a portal known as Ama-no-ukihashi.

Do the stories mentioned in kojiki have something to do with the keyhole-shaped structures found on both planets? Did the ancient Japanese make contact with extraterrestrials? Were these formations actually made by aliens?