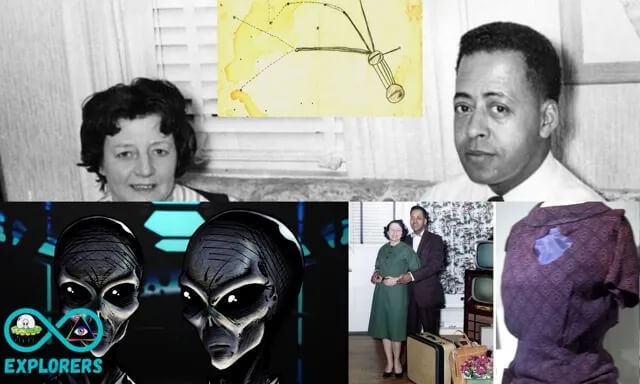 Betty and Barney Hill are considered the first known people to be abducted by aliens. They were abducted in 1961 and since then this story has been published hundreds (if not thousands of times) in the media, checked and rechecked. However, details remain that are rarely reported. It happened at night when they were driving along a road in the White Mountains of New Hampshire (USA).
According to them, everything was fine until a strange light appeared from above, which quickly began to catch up with their car.

The light came from a small “flying object”, which was moving quickly and in different directions across the sky. This object frightened them for some reason and they hurried to get away from it.

What happened next, they could not understand, they suddenly found that they were on the same road in their own car, but their clothes were dirty and in holes, the watch on his wrist stopped and Barney felt a severe pain in his neck.

A quick check with the clock on the dashboard showed that two whole hours had passed since they began to leave the “UFO” and none of them remembered what happened to them during this period of time.
After a few days, both began to feel nervousness, which only grew, both had a strong stressful state, as if both had experienced something threatening their lives, and then Betty began to see terrible nightmares.

In these nightmares, she was in an unfamiliar place, where she was painfully tormented by mysterious creatures.

Eventually Betty and Barney hill decided to go to a psychiatric clinic, where Dr. Benjamin Simon suggested that both go through a regressive hypnosis session. These sessions were gaining popularity in those years.

The sessions were held with both Betty and Barney in different rooms, so that they could not somehow influence each other’s testimonies. But both told very similar in detail, frightening stories about how in those “missed” two hours they were somehow pulled out of the car and transferred to a very long disk-shaped ship.

Their captors looked like short, gray-skinned humanoids with very large heads. This was the first description of the so-called “Grays

“, which became a classic for the following decades.

During the examination of Betty and Barney, the aliens were quite surprised by Barney’s dentures, it seemed that such a technology was completely unfamiliar to them until now.

Under hypnosis, Barney remembered how the aliens communicated with him using some form of telepathy, while he mostly saw only their eyes.

And then it was time for a medical “examination”. Barney described that they put a strange bowl-shaped device on his genitals and somehow used it to take a sperm sample from him. He also recalled that they had inserted something into his rectum and then scraped some skin off his body, possibly for DNA analysis.
As for Betty, she remembered how the aliens inserted a long needle into her navel, saying that it was a pregnancy test. In addition, the aliens showed Betty a “star map”, a diagram of which she was able to draw under hypnosis. Later, in 1968, amateur astronomer Margery Fish from Ohio discovered stars in the galaxy that matched Betty’s drawing.

If we assume that the diagram showed the “house” of the aliens, then this place was located near the binary star system Zeta-1 and Zeta-2 in the constellation Grid. True, in the 1990s, it was said that this comparison is a bit attracted and the stars in reality are not exactly located as in Betty’s drawing, but still such a coincidence looks rather curious.

After Dr. Simon conducted his hypnosis sessions with Betty and Barney, he came to the conclusion that both spouses had experienced something very traumatic and that they had “a single mental disorder.”
Skeptics from the outset were very skeptical about Betty and Barney’s story. They commented that the abduction plot is very similar to the details of the 1953 movie “Invaders from Mars”, as well as an episode from the show “Outer Limits”.

It has also been theorized that Betty and Barney did not experience an alien abduction, but something like nocturnal paralysis, but could two different people experience something similar at once? Doubtful.

Other hypotheses have been put forward, including those in which Betty and Barney were called hoaxers and outright liars.  The spouses, who, even before this story, were constantly attacked by the public due to the fact that Barney was black, and Betty was white ( in the 1960s in the United States, such a marriage was still a real challenge to society ) were greatly offended by such assumptions and soon after after how their story got into the press and made a splash, they hurried to retire away from journalists.

A few years later, in 1969, Barney Hill died suddenly at the age of only 46. The cause was a cerebral hemorrhage, but according to rumors, Barney’s death was only a consequence of those mysterious manipulations that aliens carried out on him. Betty Hill lived to be 86 years old, having managed to become a real celebrity among ufologists.

What do you think about the case of Betty and Barney Hill? Leave us your comments below.