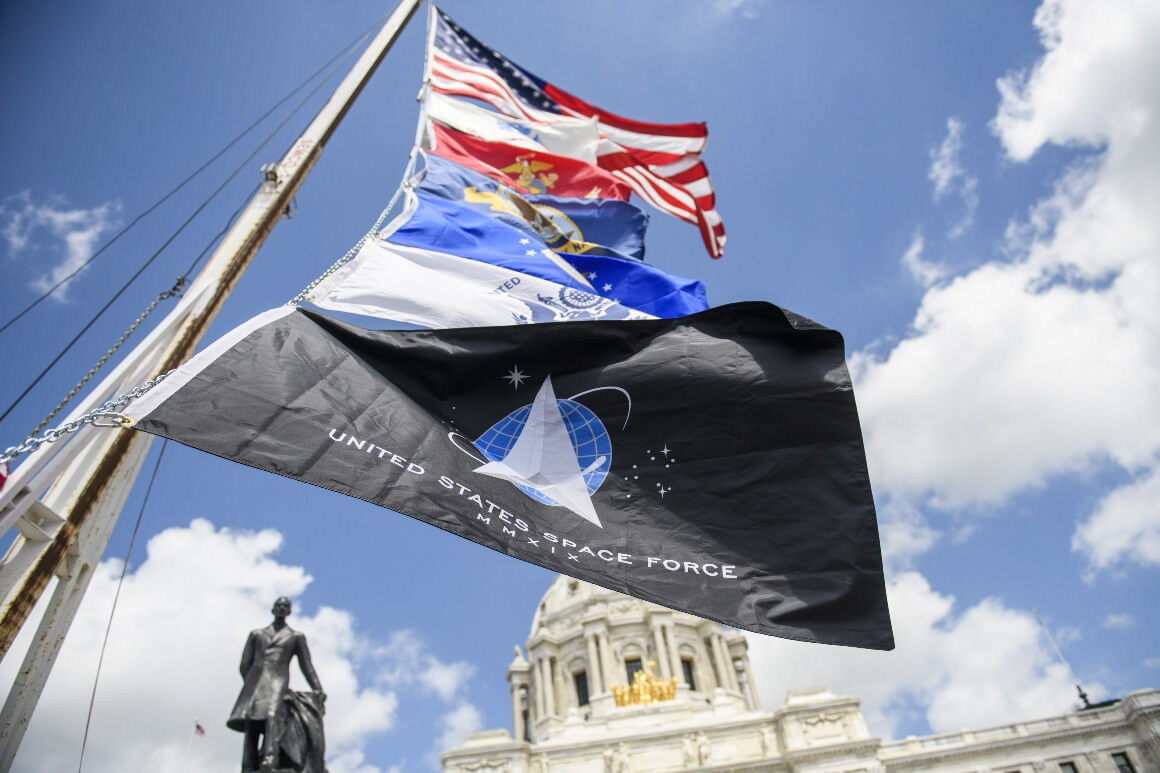 The newest branch is among a number of military and intelligence organizations in the running to take over the investigation of unexplained aircraft.

A United States Space Force flag hangs from a pole, with flags of other armed service branches, outside the Minnesota State Capitol building on May 22, 2021 in St. Paul, Minnesota. | Stephen Maturen/Getty Images

The Pentagon is considering giving the Space Force a greater role in a stepped-up effort to track and investigate reports of UFOs. But the newest military branch isn’t over the moon about the idea.

Space Force leaders are still struggling to rebrand an organization that has been lampooned since before its birth. Now, they are conflicted about becoming the military’s go-to on what the Pentagon now calls “unidentified aerial phenomena,” according to five current and former officials taking part in the discussions.

Advocates for the Space Force taking over for the Navy, which is currently leading the Pentagon’s task force responsible for studying them, believe the new service is better suited to oversee a more robust effort aimed at collecting information on UFOs, and that its association with a topic of such public fascination, particularly among young people, could even boost recruiting.

“It makes perfect sense,” said one former intelligence official who is advising the military in the planning, citing its more expansive geographic responsibilities than other military branches and access to global — and even galactic — surveillance technologies through the U.S. Space Command. “There is no limit to the Space Force mission. It doesn’t have a geographic boundary like the other services.”

But the former official also said some fear it will only deepen the branch’s public relations challenge by providing more material for the jokes, science-fiction-themed memes and other forms of popular ridicule that the Space Force has endured since it was championed by then-President Donald Trump in 2018, who made it an applause line in his political rallies.

“They really are sensitive to that,” the former official said. “They want people to take them seriously. They don’t want to do anything that is embarrassing. But this is national security. This is their job.”

The deliberations over what to do next about the unexplained sightings of high performance aircraft are part of a new push to establish a more permanent government research effort.

A June report to Congress from the director of national intelligence concluded that all but one of 144 UFO sightings that were reviewed could not be explained, including 18 that appeared to exhibit advanced properties.

The unclassified summary stated that “we currently lack sufficient information in our dataset to attribute incidents to specific explanations.” It also concluded that the unknown craft “clearly pose a safety of flight issue and may pose a challenge to U.S. national security.”

In response, the undersecretary of defense for intelligence and security is developing a plan to “formalize the mission” after being instructed by Deputy Defense Secretary Kathleen Hicks.

In a memo to senior military leaders following the report’s release, Hicks sought a plan “for the establishment and operation of the new activity, to include the organizational alignment, resources and staffing required, as well as any necessary authorities.”

The issue has primarily been overseen by a temporary Pentagon UAP Task Force that was stood up in 2020 and led by the Navy, whose pilots, radars and other surveillance systems have compiled most of the recent reports of unexplained sightings.

The Pentagon has provided few details about the deliberations over what will replace the task force. “Planning for an activity to take over the UAPTF’s mission is ongoing,” said Pentagon spokesperson Susan Gough.

The Space Force declined to address the internal deliberations. The Department of the Air Force, which oversees the Space Force, also deferred questions to Gough.

Congress, which requested the UAP report, is also planning to play more of a role.

The Senate’s version of the fiscal 2022 Intelligence Act includes several provisions on the subject, including requiring classified reports to Congress on UAP sightings and analysis every quarter, as well as calling on all agencies to share any data they have so that a more comprehensive UFO file can be compiled for further study.

A congressional staffer also told POLITICO the classified portion of the bill includes a provision outlining more parameters for tackling the subject over the longer term, including recommending additional funding to finance the effort.

A former Pentagon official also said he expects there will also be legislative guidance on UAPs in a final version of the National Defense Authorization Act.

But in additionto the Space Force,which works in tandem with the newly reestablished U.S. Space Command, officials are considering a number of military and intelligence organizations at this early stage that could take the lead or combine their efforts in a new organization.

One is the secretive Space Security and Defense Program, which reports to both the Pentagon and thedirector of national intelligence, which oversees all spy agencies.

The outfit has a broad writ to assess potential space threats and also has authority to award contracts to develop new collection capabilities. Other candidates for a greater role in overseeing UFO issues are the Defense Intelligence Agency, which studies foreign weapons systems and has a history of researching such sightings, as well as the North American Aerospace Defense Command in Colorado, which is responsible for defending the nation’s airspace.

Chris Mellon, a former senior Pentagon intelligence official and congressional staffer who has been advising the military on the topic, said whoever is tasked with leading a more permanent effort needs to be willing to work closely with numerous military, intelligence and law enforcement agencies across the government as well as the academic and scientific communities and the public.

“NORAD would seem to make sense, but again its willingness to share information with other organizations is questionable. Still, they have money and contracting authority and the heft needed to make changes to the status quo if they were willing to aggressively pursue the issue,” he wrote in a recent blog post.

“Regardless,” he added, “the first and most important step for Congress to take is to either identify a permanent home for the mission or require DOD and theCI [intelligence community]to do so and to explain their resulting rationale with the oversight committees.”