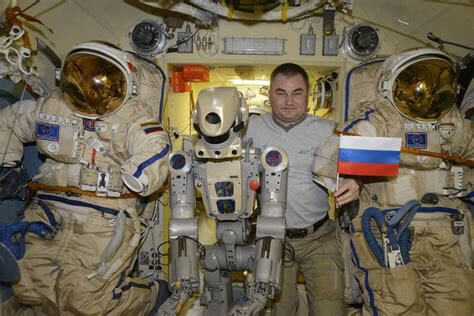 Skybot Russian Humanoid Robot BLASTS OFF To International Space Station! Unpiloted Soyuz MS-14 rocket launches to the ISS at 11:38pm eastern on 8/21/2019, so take less than 10 minutes to learn the SECRETS revealed in this video! This terminator humanoid robot (SKYBOT F-850) marks a major step in military space technology. You will see how space robots could be used by the military to conduct things than you’ve only been able to imagine. See the russian terminator “Skybot” literally firing on all cylinders. Not to be outdone, you will also explore a deep dive analysis into a FOIA request on the US Air Force Space Command, to discover how the pieces of the space force puzzle connect with DARPA, NASA, and other classified space missions.

After a short stay aboard the International Space Station, Russia’s humanoid robot, Skybot F850, is on its way home, stuffed inside a Soyuz spacecraft with no crew. Skybot, originally known as FEDOR, was put through a litany of tests by the Russian cosmonaut crew during its two-week stay on the station, to see if it could help free up time for the people aboard the orbiting lab.

Skybot’s trip to the space station was also a kind of test. The robot launched alone in a passenger version of the Soyuz spacecraft atop a new kind of rocket. Soon, Russia will use this rocket to launch human crews to space, and it wanted to make sure the capsule and booster worked well together first, without people on board.

The launch itself was a success, but once in space, the Soyuz capsule carrying Skybot had a hard time attaching to the ISS. It attempted to dock by itself to the station, but ultimately had to abort its first attempt due to a problem with one of the ports on the outside of the ISS. The crew on board the station had to move another visiting spacecraft to free up a port for the Soyuz. That ultimately worked, and Skybot arrived — four days after launch instead of the planned two.

Back on Earth, Skybot has a wide range of skills, including driving cars and even shooting guns. Those activities weren’t on the schedule for the robot’s time on the ISS, though. Instead, the android tried its hand at cosmonaut chores, such as working with tools and connecting hardware. Some of the tests even seemed relatively successful in the microgravity environment.

But you don’t have to take our word for it. Skybot also maintained a Twitter account of its exploits, which range from informative to weirdly existential. Here are some highlights, with the help of Google Translate:

Here the bot poses with Russian cosmonaut’s Aleksander Skvortsov and Alexey Ovchinin soon after arrival. Skybot mentioned that his gears were in good shape upon arrival.

Here, Skybot attempts to use a power drill, which gets uncomfortably close to Ovchinin’s head. At the end of the video, Skybot seemingly dabs its forehead with a towel. Power drilling is strenuous work!

Even robots get homesick after a while. Skybot noted that during its free time, it liked to admire our Earth from one of the port holes. “It is beautiful,” the bot expressed in one tweet.

The Soyuz spacecraft carrying Skybot departed the ISS around 2:15PM ET, and will spend the next few hours making its way back down to its landing site in Kazakhstan. Russia plans to recover the capsule to analyze it, as well as retrieve the country’s now space-hardened robot.