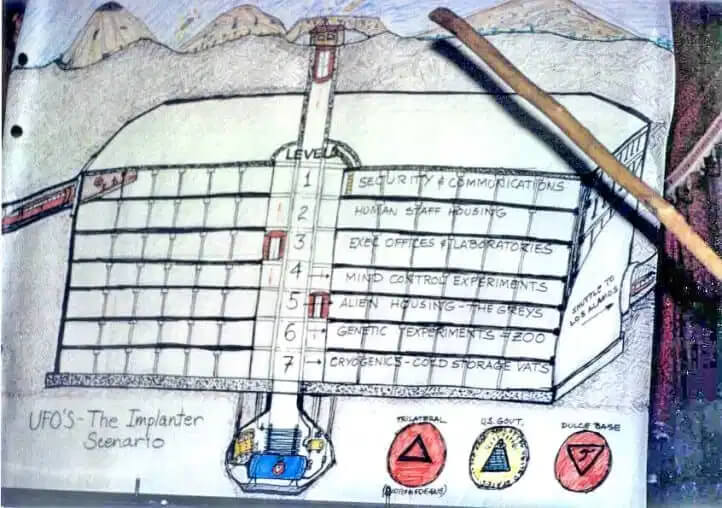 Since the 1970s, there has been a rumor about the secret underground base beneath the town of Dulce, New Mexico, operated by the US military and extraterrestrials. Former American engineer Phil Schneider shared the shocking story about the shootout between the US military and grey aliens at the base, followed by a ‘Nordic-looking’ woman named Christa Tilton and her abduction story.

Dulce has become the favorite spot for ufologists after an American businessman named Paul Bennewitz intercepted electronic communication between alien spacecraft and an installation outside Albuquerque in 1979. By the 1980s, he claimed to have discovered the Dulce base. Meanwhile, New Mexico State police officer Gabriel Valdez reported a series of cattle mutilation in the town.

In her testimony, Tilton shared the secrets about Dulce base that include experiments on humans and animals. Eight years after the alleged shooting event, she was abducted. She claimed that the two small aliens dragged her into a spaceship and took her to Dulce base in July 1987 without her consent.

It should be noted that she recalled her memories of missing hours after going through hypnosis. She had been unconscious before she found herself in a small craft. A human-like entity, whom she called a guide, helped her gaining her consciousness, and then both of them went outside the craft. She found herself on a hill from where she was taken in a tunnel to an underground facility, guarded by men in red-military type jumpsuits.

According to her, this underground facility had many levels. She said that Level 5 terrified her. She was asked to change her clothes and wear a patient gown. “I stepped onto this scale-like device and suddenly the screen lighted up and I heard strange tones and frequencies that made my ears hurt,” Tilton said.

After that, she walked through a corridor, down a hall, and came into a large room. It smelled like formaldehyde. She saw 4 feet tall huge tanks, on which computerized gauges and huge arm-like devices were attached. The guide took her away to a large laboratory.

She was amazed to see machines there because she had never seen anything like those. Interestingly, a small grey being was working there at a counter. Tilton, who was a nurse could relate the metal clinking to the sound of surgical equipment when she prepared them for the doctor. Her guide ordered her to sit on a table standing in the middle of the lab.

A human dressed as a doctor entered the room, and she underwent a medical examination. The doctor called one more grey being for assistance.

“I knew I was being examined internally and when I lifted my head, I saw this horrid grey alien glaring at me with large black eyes. It was then I felt a stabbing pain. I screamed and then the human doctor stood next to me and rubbed something over my stomach. It was cold. The pain immediately subsided.”

Tilton said that the most disturbing things she saw on the other side of the lab. “I saw what looked to me to be people of all different types standing up against the wall inside a clear casing-like chamber. I went closer and it looked ‘as if they were wax figures. I could not understand what I was seeing. I also saw animals in cages. They were alive,” she explained. She spent three hours at the underground facility.

Tilton had other encounters with human-like beings from other worlds. She recalled meeting a being named “Maijan,” who told her that he had ancestors from the Aztec and Mayan race. She called Grey aliens “soulless,” as they were controlled by higher intelligent beings (could be humans) who had engaged them in slavery. During her research, she found out that there are many such underground facilities with different purposes. She assured that most of the underground bases were being used for covert purposes or other purposes involving governments who are doing certain types of testing that they consider would be safer to do underground.

It is not easy to believe Christa Tilton’s story, but the residents of Dulce strongly believed in the UFO activities happening over their town since the 1960s. Among 3000 residents, there are many who shared stories “of low-flying military helicopters and fast-moving lights darting back and forth in the sky.”

One of the residents named Geraldine Julian claimed to have seen a huge spaceship hovering over her.