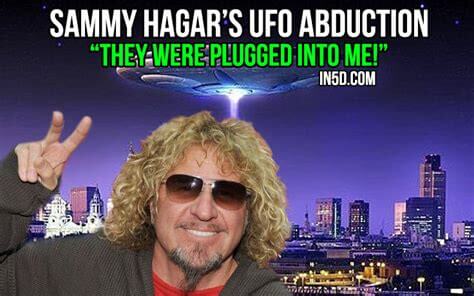 Hagar had previously been a member of the 70s band Montrose and had a fairly successful solo career before he was asked to replace David Lee Roth as the lead singer for Van Halen in 1985. Hagar’s description of guitar legend Eddie Van Halen as a monument to drug abuse and alcoholism would be almost poignant if it weren’t so frighteningly unpleasant to imagine. The guitarist’s descent into total ineptitude on stage as he battled his demons during a 2004 reunion tour was also not easy to read about and was extremely painful for Hagar to witness. The two haven’t spoken for many years now.

But getting back to Hagar’s interview with MTV’s Hive and his comments about the aliens: After the obligatory discussion of groupies and some gossipy talk about the unfriendly attitude evinced by David Lee Roth toward Hagar, the interviewer asks:

“Before reading ‘Red,’ I didn’t realize you had an interest in mysticism. You’ve apparently consulted with psychics and studied numerology and had crazy dreams about UFOs. Why haven’t we seen more mystical themes in your music?”

To which Hagar replies, “I didn’t write about it much in Van Halen, but I have done a few songs that have sci-fi themes. There’s ‘Space Station #5’ on the first Montrose album, and then on the second album there’s ‘Space Age Sacrifice.’ My first solo album, there’s ‘Silver Lights’ and ‘Hot Rocks,’ which are about UFOs coming and taking people away.”

It seems Hagar’s sci-fi mysticism was “hidden in plain sight” and was a theme of his writing from very early on. His next solo album included “Little Star” and “Someone Out There,” which are about how humankind is not alone in the universe. Sample lyrics go like this: “I feel so scared and lonely to think we’re the only ones, when I know there’s someone out there and someday they’ll come.”

“People say there’s no other life in the universe,” Hagar said by way of explanation. “But you know how big the universe is? It’s freaking huge! If we’re really the only ones out there, that’s scarier to me than thinking there are aliens. So my whole career I’ve been writing about these kinda things. But they’ve never been the hits. They’ve only been underground songs. If anything in the book has been played down, it’s my mystical side, because I don’t want to sound like I’m crazy.”

The fear of seeming crazy Hagar complains of is one of the most frequent emotions felt when one first begins to assimilate the fact that one has experienced contact with aliens. When an abductee finally makes the brave decision to speak about his encounters, he must do so in spite of the possibility of being rejected by family and friends as a new and strange reality begins to take hold.

But it is a reality that Hagar seems to inhabit a little more comfortably at times.

“My opinions about the UFO stuff,” he enthused, “well, I could write a whole book just devoted to that. I love it, man. I’m into it deep.”

The MTV interviewer finally asks, point blank, “Okay, let’s just cut to the chase. I’m just going to come out and ask it. Have you ever been abducted by aliens?”

“What? Really? I was kidding. You seriously believe that?”

Hagar laughed and said, “Now you’re making me sound like a crazy person.”

“How is that crazy? I wasn’t there. I don’t know what happened to you.”

“Remember the story in the book,” Hagar said, “where I have a dream about being contacted by aliens in the foothills above Fontana?”

The interviewer then reads aloud, “I saw a ship and two creatures inside of this ship. And they were connected to me, tapped into my mind through some kind of mysterious wireless connection.”

He then asks, “You’re telling me that wasn’t a dream?”

“That’s right,” Hagar responds. “It was real. Aliens were plugged into me. It was a download situation. This was long before computers or any kind of wireless. There weren’t even wireless telephones. Looking back now, it was like, ‘F***, they downloaded something into me!’ Or they uploaded something from my brain, like an experiment. ‘See what this guy knows.’”

Hagar’s decision to call the experience a dream when he wrote about it in his book is typical of abductees in many ways. The abduction experience, when it is recalled consciously and without resorting to hypnotic regression, is often thought of as being a “dreamlike” experience in spite of the fact that it is happening in physical terms. Another familiar aspect of what Hagar is talking about is the need for the UFO contactee to continue to keep the experience filed away as an “unknown,” to preserve a sense of “unreality” in his memories of the event. Crossing over to total belief is a dangerous thing for the mind to attempt, and it is fraught with more complications than the mind can easily deal with. The abductee must be content to let the memories waver in some netherworld of “real/unreal” that he can never totally resolve.

The fact that the aliens “downloaded” information into his brain and also “uploaded” information out of it is often seen in abduction accounts. There is nearly always an exchange of information and data between the abductors and the abductee, though this exchange takes several different forms, occurring frequently as telepathic conversation.

After again affirming the truth of the story he told, Hagar moves on to recount another experience, this time from his childhood.

“Another thing happened when I was about four,” Hagar said, “that I didn’t put in the book. One time I saw what I considered to be, well, at the time I thought it was a car with no wheels. We lived out in the country and I saw this thing floating across a field, creating this big dust storm. I threw rocks at it and s***. And I don’t know what happened after that.”

“You blacked out?” the interviewer asked.

“I guess,” Hagar answered. “I just have no memory of it. And that wasn’t a dream. It was during daylight.”

At that point, the interviewer sympathetically says that he understand Hagar’s reluctance to talk about his experiences, acknowledging that alien abduction is a “tough sell.”

“Especially back a few decades ago,” Hagar said, “when this stuff happened to me. I couldn’t talk about it because I didn’t know how to explain it. I didn’t understand the technology. But now I’m pretty sure it was a wireless situation. Either a download or an upload. They were tapped into my brain and the knowledge was transferred back and forth. I could see them and everything while it was happening. There was a visual involved, almost like . . . I don’t know. (Laughs.) Don’t get me going!”

Which seems to imply that Hagar has a lot more to talk about, to the right audience and at the right time. If an interviewer more steeped in the literature and everyday manifestations of UFOs and the alien presence were given the opportunity to interview Hagar in more detail, one can only wonder what other revelations would be brought forth. We might even learn why the occasional celebrity becomes a “Chosen One” along with the mere mortals we more often hear about.

One can even ask if rock and roll is an alien invention altogether, the electrified siren’s song from the great unknown leading us to new levels of evolutionary development. Stranger things have happened, right? Or maybe not.