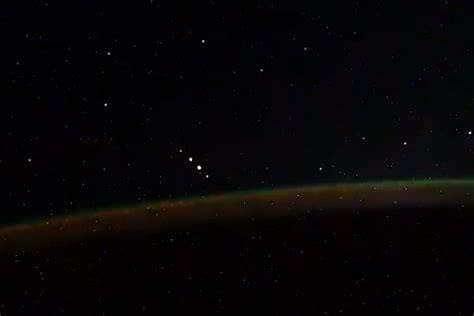 A Russian cosmonaut on the International Space Station has sparked theories of a UFO sighting after he shared footage of mysterious lights in the midst of an aurora.

Ivan Vagner said the video showed “five objects” that appear to be flying alongside the aurora.

He wrote: “Space guests, or how I filmed the new time-lapse. The peak of aurora borealis when passing over the Antarctic in Australia’s longitude, meaning in between them.

“However, in the video, you will see something else, not only the aurora.”

He added that at 9-12 seconds in the video, five objects appear alongside the aurora. Mr Vagner asked his followers to help him in determining what the lights could be.

“Meteors, satellites or…? P.S. The frames were captured 1 per sec and later assembled in a video with 25 frames per sec rate. Meaning, the real observation time is 52 sec,” said Mr Vagner.

One social media user suggested the objects could be space rocks but he added that the footage was “ambiguous” as space debris does not usually light up in formation.

Others suggested the lights were likely known satellites, such as the Starlink fleet belonging to SpaceX.

While other social media users were convinced the cosmonaut had captured footage of an Unidentified Flying Object.

“Ivan those are UFOs!,” wrote one person on Twitter. “They are evenly spaced and in military formation. Here is a close up from your video. Great eye my friend!”

Mr Vagner said the information has been shared with Roscosmos management and the materials were sent to TsNIIMash and the Space Research Institute of the Russian Academy of Sciences for further analysis.