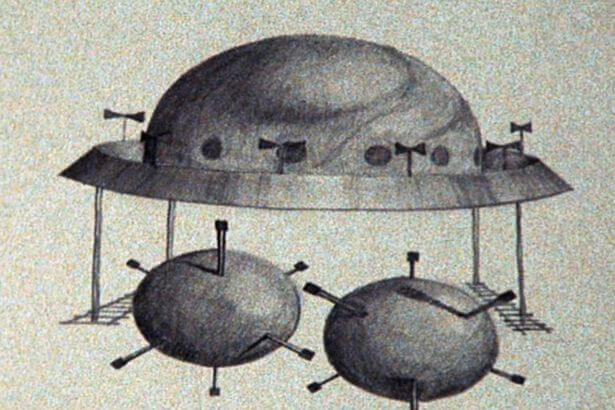 40 years ago Robert Taylor said he was abducted by aliens during a walk in the woods, sparking an actual police investigation – it is still considered by many as one of the most respected UFO claims

When Robert Taylor said he saw an alien spaceship in the woods near a Scottish town 40 years ago it made headlines all over the world.

The famous incident, to this day, is the only reported UFO sighting in the UK that has been investigated by the police.

Detectives treated the rips sustained to Mr Taylor’s trousers as evidence of an assault but never managed to work out what happened to him.

Mr Taylor, a forester, claims that he saw a 30ft-high “dome-shaped” object in a clearing in the forest near the Livingston on 9 November 1979

In his testimony to the police he stated that ‘two-spiked spheres’ rolled out towards him and grabbed on to either side of his legs before he passed out.

The 61-year-old said he woke up in a dishevelled and shaken state 20 minutes later.

Mr Taylor, who passed away in 2007, was a respected war hero and well-known around his area as a teetotal churchgoer.

Reports says that no-one doubted that his sincerity in what he had believed to have seen and he never deviated away from the story for the rest of his life.

The elderly man said he had been working alone checking fences and gates at Dechmont Woods at 10:30 when he spotted a spaceship in a clearing.

After the spiked arms slinked out to grab him, all he could remember was an intense smell of burning.

When he came back around, he was alone in the clearing apart from a “deep regular pattern” of marks on the ground.

Upon arriving home he told his wife Mary that he had been attacked by a “spaceship thing”.

Due to Mr Taylor being in such a dishevelled state, the police were called and officers were suddenly inquiring into an an assault on a 61-year-old forester by a “spaceship thing”.

Det Con Ian Wark, the crime scene investigator, says he arrived at the clearing to find a large gathering of officers already there.

He reportedly told the BBC that he too saw strange marks on the ground – around 32 holes, all 3.5 inches in diameter, similar to those made by the caterpillar tracks fitted on bulldozers.

“After examining every piece of machinery they had up there, we did not find anything to match,” he said.

The officer went to Mr Taylor’s employer, Livingston Development Corporation, to see if they had anything that could make the pattern.

“After examining every piece of machinery they had up there, we did not find anything to match,” he said.

“They did not come from anywhere or go anywhere. They just arrived as though a helicopter or something had landed from the sky.”

A police report from the time said the marks on the ground indicated an “object of several tons had stood there but there was nothing to show that it had been driven or towed away”.