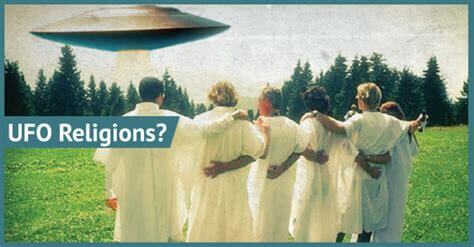 Extraterrestrials are believed by some to carry salvation from outer space. Carried here on flying saucers, their mission is to bring peace and harmony to our tortured planet. From this, several religious movements have been spawned, and much work remains to be done.

In 1975, Claude King was lying on his sofa in Salt Lake City when, he said, he was visited by advanced living beings.

They revealed to him the nature of the Creation. One of the things he learned from these “angelic beings” is that “Nothingness and possibility come in and out of bond infinite times in a finite moment.”

That’s the sort of priceless information that could cause someone to change their name, and that’s what Claude did; henceforth, he was to be known as Summum Bonum Amon Ra. But, he was reluctant to shed his childhood nickname of Corky, because nothing confers dignity and awesomeness onto the founder of a religion than the name Corky.

Summum is a mash-up of Egyptian polytheism, science fiction, and something to do with Moses smashing the tablets on which the Ten Commandments were written. Adherents do a lot of meditation in order to find their way to “spiritual psychokinesis.”

Long story short―Summum “operates out of a pyramid in Salt Lake City and is most famous for carrying on the Egyptian tradition of mummification, a practice that is also the sect’s primary source of income” (Mother Jones).

Fees for mummification range from $4,000 for a pet, to $67,000 for a human. But, this comes with the claim that mummified cells might be used for cloning in the future.

Frenchman Claude Vorilhon had an encounter with an alien in 1973 while hiking around the crater of a sleeping volcano. A long-haired green guy, four feet tall, stepped out of his spacecraft and spoke to Vorilhon in French.

The little green fellow explained that he was on a mission from a very advanced civilization to explain the origin of life; extraterrestrials, called the Elohim, it seems, are responsible for the creation of humans. Apparently, some sophisticated DNA manipulation and cloning was involved; Adam and Eve were custom designed, sort of like the cabinets and marble-topped island for the kitchen.

(Finally, an explanation for the riddle of why the Garden of Eden couple don’t have belly buttons).

The Elohim had already sent prophets to deliver this knowledge but there had been communication problems. These earlier prophets had names such as Buddha, Moses, Jesus, and Mohammed. Now, it was the turn of Vorilhon to deliver enlightenment to the common herd, so he set about starting a sect.

Step one in the create-your-own-religion handbook seems to be that the founder must change his name. So, Claude Vorilhon became Raël, and he stuck a dieresis over the “ë” to show that he was something special.

There’s stuff in the Raëlian belief system about peace and immortality achieved through transferring the personalities and memories of old people into newly cloned babies. And, “perfect freedom” can be achieved through unrestrained and unlimited sex; of course it can be.

Raël took up car racing as a way to publicize his religion, just like any accomplished messiah would; it turns out he wasn’t very good at it.

Go Topless Day under the slogan “Free your breasts, free your mind” was another eye-catching moment designed to haul in more members to add to the claimed congregation of about 70,000. Of course, that doesn’t include the Elohim whose numbers may be vast, or none. We’ll never know.

The now-familiar beginnings of UFO-based religions applies to the Aetherius Society, which started with an alien visitation to a man who was all alone. In 1954, London taxi driver George King was startled to hear the message “Prepare yourself! You are to become the voice of Interplanetary Parliament.”

The celestial call came from none other than the Master Aetherius himself. King had been picked out of the billions on Earth because he was skilled in the practice of yoga and meditation. This expertise enabled him to receive telepathic messages from Venus (average daytime temperature 900o F, 465 o C).

Earlier, Cosmic Masters such as Buddha and Jesus also came from Venus and Krishna travelled from distant Saturn. All the while, aliens aboard their flying saucers made frequent visits to straighten out the messes we humans seem intent on getting ourselves into.

With the remit from the Master Aetherius, King formed the Aetherius Society to bring harmony to the world. You see, greed, envy, and other nasty human traits have knocked the planet’s karma out of shape and focussing spiritual energy is the way to restore good fortune.

This is where the Spiritual Energy Battery, invented by King, comes into play. The operating mechanisms of this gizmo are secret, but it’s claimed to be able to store spiritual energy that is loaded into it through the chants and prayers of “spiritual workers.”

Then, when the world goes through a bad patch, a burst of spiritual energy can be released to make everything tickety-boo again; sort of like the automobile association turning up with the booster cables on a February morning.

(It looks as though the Spiritual Energy Battery must have suffered a malfunction in 2020).

George King avoided the cliché of giving himself a swami-like new name, but he wasn’t averse to gathering up some fancy titles. Somewhere along the way, he acquired a doctorate, although in what discipline and from which accredited institution is not revealed. He also had a Knighthood in the Sovereign Military Orthodox Dynastic Imperial Constantinian Order of Saint Georges, and was Metropolitan Archbishop of the Aetherius Churches.

George King died in 1997, but the Aetherius Society soldiers on as an international movement, still clinging to the belief that a clever species of fish on the distant planet of Garouche is sucking the oxygen out of Earth.