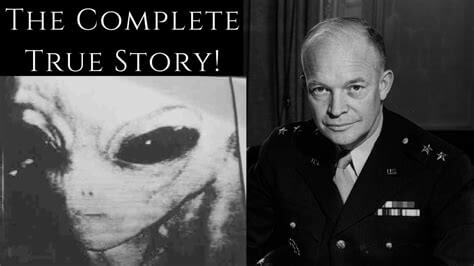 COAST TO COAST AM – Author and researcher Paul Blake Smith talked about his latest work examining the claim that President Eisenhower secretly met with aliens at an Air Force base. Smith also presented details of his investigation into the crash of a UFO just outside of Cape Girardeau, Missouri in 1941). In February 1954, President Dwight Eisenhower flew to Palm Springs, CA for a golfing trip (considered odd since it was so far from Washington DC). While there, his whereabouts were not officially recorded for one evening, and according to a report of a witness, a pilot, who came forward in the 1980s, Eisenhower went to nearby Edwards AFB. Smith recounted the report: They stood at the edge of an open-air hangar, and on the runway were five spaceships– three circular, and two elongated.