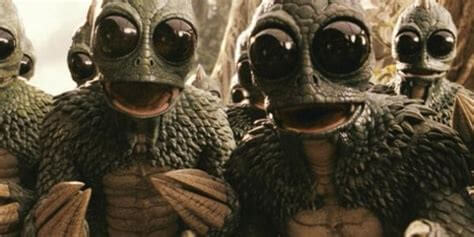 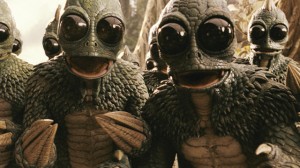 We now head over to Italy, where a private security guard was driven to unusually dangerous extremes by an alleged encounter which left behind atypically strong (though still hardly conclusive) evidence. On December 6, 1978, he was out doing his rounds when he saw four lights coming toward the house he was guarding. Approaching the lights with pistol drawn, he saw that they were three meters (10 ft) tall, green-skinned, mouthpiece-wearing reptilian things with spikes extending from their heads. He claimed the aliens then seemed to hit him with some sort of heat beam. He sprinted away, radioed in, and then broke off contact, having to be found by a later security patrol. When he saw the other guards, he aimed his gun at them, but fortunately didn’t fire. When the scene was later investigated, very large unusual footprints (about 50 cm or 20 inches long) were found along with evidence of scorching among the trees, which indicated at least something out of the ordinary had happened.

But that wasn’t the end of it for Zanfretta. On December 26, the aliens returned, and this time they got him. As he later recalled under hypnotic suggestion, the aliens took him inside their craft and attached a sort of communication helmet to him. One of the aliens shot Zanfretta’s gun into a piece of metal, apparently to see what would happen. Zanfretta told the lizard men that he was afraid and wanted to be released. They obliged.

That was until they abducted him again on July 29, 1979, yet again on December 2, 1979, and a fifth time in 1980. On the fifth occasion, the aliens took him to a crystal mothership and showed him a frog-like being suspended in a tube that they claimed was an enemy of their species. Through it all, they provided very little actual motive for why they repeatedly abducted a security guard for short periods. As with others we’ve described, Zanfretta seemed to benefit very little from his claims, and in fact spent decades languishing in obscurity after an initial media flurry over his claims.