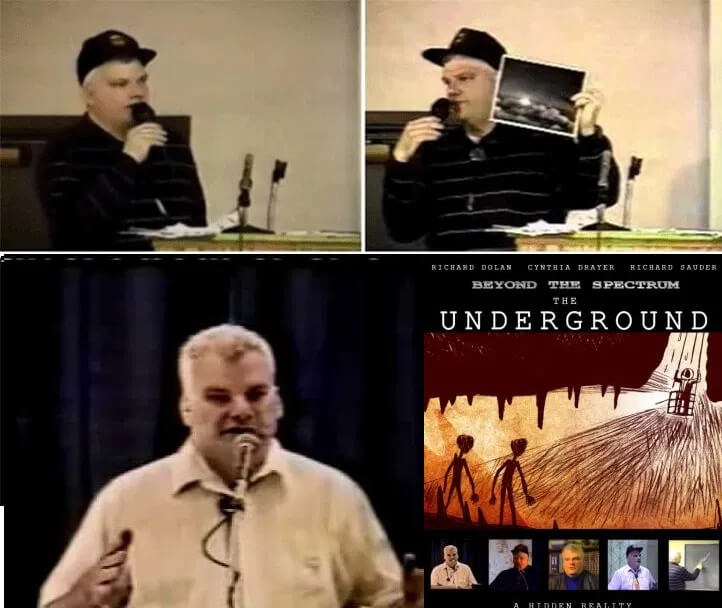 In 1995, previously unknown geologist-engineer Phil Schneider delivered a lecture in which he spoke about the secret underground bases on which the US government spends a huge part of its budget.

Phil Schneider was a geologist and engineer and, according to him, he worked for 17 years on the so-called “black” (classified) US projects.
Among conspiracy theorists, he is considered one of the most important informants in history.

In the 1990s, Schneider made a decision for himself to tell the public about everything that the US authorities are hiding.
In 1995, he gave a surprise talk at the Preparedness Expo, talking about the New World Order and the U.S. government’s ties to aliens.

Less than 6 months after this performance, Phil Schneider was found dead in his apartment with a piano string wrapped around his neck.
Rumors immediately spread that it was a “military-style” execution.

Also, Phil’s body was in such a state that people close to the investigation let out that, apparently, Phil was brutally tortured before his death.
However, the official cause of death was suicide.

By the way, Phil Schneider suspected from the very beginning that he could be killed if he let it out.
He repeatedly told family and friends that if they were ever told that he had committed suicide, it would be untrue and that it would be murder.

Phil Schneider understood that by his revelations he angered many powerful people and they would definitely take some action against him, as a result of which he would be killed.

In his report, Schneider said that he had worked for years to create deep underground military bases, in which, among other things, alien equipment was placed.
Phil Schneider assured that the US authorities have known about the existence of aliens since 1909 and are doing their best to hide this information from the public.

He also claimed that more than $500 billion is allocated annually to secret projects dealing with alien issues.
And that 28% of the US gross national product is spent on building underground bases.
This “black budget”, as he called it, is completely hidden from Congress.
There is no doubt that these projects continue to this day.

Below Are 8 Key Messages From Phil Schneider’s 1995 Speech:

7.  At least 9 races of alien beings view humans as a food source.
However, this does not mean that they are all cannibals.
Instead of actually ingesting human flesh, they use the secretions of the glands of humans and animals to prepare a mixture of vitamins added to their food, and some alien races can get a high, like drugs, from the adrenaline withdrawn from human bodies.

8. Sixteen days before his first public appearance, Schneider was attacked by someone he identified as an FBI agent.
This man wounded Schneider in the shoulder and in response Schneider shot and killed him.
But when he reported this directly to the FBI, then Schneider was told that they did not know about anything like that.

However, after the report, he was attacked at least 11 times, according to him.
He also claimed that government agents tried to kidnap his daughter, but these attempts were unsuccessful due to the heroic actions of his ex-wife.