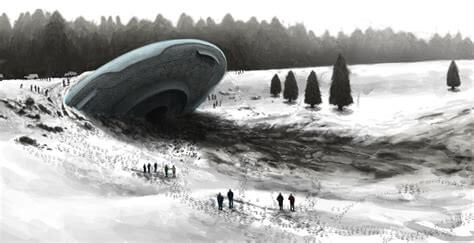 In 1974, teenagers from a small town in Pennsylvania reported to police officers that they saw something enveloped in flames rush across the sky over a mountain and fall nearby, presumably into a flooded quarry thus began the famous incident of UFO crash in Pennsylvania.

The UFO Crash In Pennsylvania

On the evening of November 9, 1974, several frightened teenagers called the police in the quiet town of Carbondale, Lackawanna County, Pennsylvania (USA).

A group of friends, 14-year-old John Lloyd , 16-year-old William Lloyd, and 15-year-old Robert Gillette Jr. , claimed that they were playing in a local park when they saw a “shooting star-like” fiery object in the sky sweeping over Mount Salem.

This object fell somewhere behind the trees, showering everything around it with a sheaf of sparks and making a “whistling noise” during the fall.

Curious teenagers decided to run in that direction and when they got to a small man-made reservoir – a former coal-mining quarry, they saw something large and glowing about 20 meters from the shore underwater. They thought it was the same object that fell from the sky.

They also claimed that for several minutes there was a hissing sound from the pond, as if “someone had thrown a cigarette into the water”.

The police initially thought it was an obvious prank, but officers were sent there anyway to check. This marked the beginning of one of the strangest UFO incidents in Pennsylvania history.

When the police arrived, they were surprised to see that there was indeed something emitting an eerie-looking glow under the surface of the water in the quarry. At the same time, the adolescents who came with them claimed that the object at the bottom had changed its position from the moment they saw it.

The police had no idea what it was, but just in case, they quickly cordoned off the area to prevent outsiders from entering.

By that time, some police officers still considered the incident just a childish joke and it was reported that one police officer even fired four shots into the pond at a mysterious object, thinking that there was something like a large balloon with a glowing liquid or something like that. but to no avail.

Indeed, upon closer inspection, the object was something spherical, about 5 feet in diameter (1.5 meters). The glow emanating from this object pulsed evenly with a white-yellow light.

Then the police came up with a version that it was a crashed private plane, but the boys did not agreed with them.

The next idea was that it was a meteorite, some kind of space debris, or even a shot down Soviet rocket.

However, none of these assumptions could explain the very strange incident that happened when a boat was launched into the water of the quarry and several police officers sailed to the location of the object. At this moment, the object moved from its place and began to quickly approach the boat under water, and then just as quickly returned to its place.

The police were perplexed and decided to leave the study of the object until the morning. However, the next morning, nothing was glowing under the water.

The report that a UFO had fallen into the quarry instantly hit the local newspaper, and soon the police were busy mainly trying to keep the hundreds of onlookers gathered around the quarry. People tried to swim to the place of the alleged location of the object in boats and some even by hand, but they were not allowed.

Meanwhile, someone from the police called Dr. J. Allen Heineck’s UFO Research Center in Evanston, Illinois. There he was told that it was most likely a meteor or a meteor fragment, and was also advised to take a Geiger counter reading just in case. However, Hynek also sent his ufologist to the scene.

Another ufologist who quickly found out about the case in Pennsylvania and came there to study on the spot was MJ Graeber, the founder of UFORIC, a Philadelphia-based UFO Information and Information Center. By the time he arrived, the area was inundated with thousands of curious and UFO enthusiasts. It was the people who blocked the nearest roads with their cars and spread all kinds of rumors.

“It was like a scene from a sci-fi movie, and there was a growing concern that the ambulances would not be able to get there due to traffic congestion if someone needed help. Worse, although we had no idea bizarre rumors spread like wildfire about what was actually in the water, and several very high-profile UFO enthusiasts who roamed the area questioned the effectiveness of the police, fire companies, and the work of other UFO researchers.

It was rumored that an alien spacecraft had landed – not crashed – in this silted pond, and that the military had managed to lift everything in the water and carry it away before anyone could see it.

According to another rumor, the UFO was loaded onto a flatcar, which was then transported to a location on a nearby (albeit long abandoned) railway line – and in another message, using two military helicopters, the object was lifted from the water and placed in an armored truck.

Curiously, I, too, ended up with a rather ridiculous rumor that led me to be on the scene as a government agent or a high-ranking Air Force officer disguised as a UFO field investigator. But the truth was that I was just a guy who was interested in the UFO phenomenon and was investigating sighting reports about two years before the incident, “Graeber said.

Curiously, Graeber reported that only the police and one Air Force officer were on the scene, and there was no armed military, despite what others later claimed.

While the investigation was underway, the local fire department made efforts to pump and drain the pond to find out if there was anything in it, but they faced many difficulties related to debris and silt, which made the process extremely slow and mostly useless.

Another idea was to try to use a crane equipped with a magnet to lift an object lying on the bottom, but this proved to be impractical, and there were still concerns that whatever it was, from whatever it was, it could leak hazardous substances, including radioactive ones.

In the end, they called a diver named Mark Stamey to dive in and see what lay there. Meanwhile, some UFO researchers were questioned by journalists to express their thoughts on this matter. Most of them were beginning to think it might be a hoax, or at most a meteor.

“Ufologists gave interviews to the press, and the TV company’s helicopter circled over the pond, churning water. Although they still did not have reliable information about what the object in the water could be, Dr. Heineck’s representative and he began to suspect that the incident could be a hoax. which the teenagers put on on the whim of a fun Saturday night.

They thought that maybe their deception just got out of hand and took on a life of its own – and that the boys might have been too scared to admit what they had done.

Of course, it could have happened that the boys witnessed a meteor or fireball (a large and sometimes exploding meteor) streaking across the night sky and mistakenly assumed that it was the same luminous object that they discovered a few moments later in the pond.

This seemed a reasonable assumption since the boys’ description of the air phenomenon they observed was completely meteoric in nature. However, Their inspection of the alleged crash site showed that there were no topographic markers to suggest that something like an airplane, large space debris, or a meteor hit the pond or its surrounding area.

There was no apparent displacement of the earth; there was no displacement of water from the pond; there were no signs of fire, tree branches toppled or slipping marks forming a furrow in the soil, as if a large piece of space debris or a meteor had fallen into the pond or the surrounding area, ”said Graeber.

When diver Stamy finally got ready and dived under the water, he soon came ashore, holding a large mining flashlight. After that, one of the teenagers, Robert Gillett Jr., said that he deliberately threw the lantern into the water to play a trick on his sister.

However, the other two teenagers, even after this confession, still insisted that they really saw how something really flew through the sky and fell through the trees.

When the words of Robert Gillette Jr. were published in the press, disaffected UFO enthusiasts and ufologists began to leave the area.

However, not everyone believed the version of the hoax, there were still many who believed that the UFO really existed and that the boy’s words were specially adjusted to drive away all outsiders from the career.

There were also people who reported that they saw on the road near the quarry a large military truck with something large on it, surrounded by the military, with the same miner’s lantern installed there, and that all this was arranged so that onlookers would leave and be hidden the fact that the military pulled out of the water and took with them an alien ship.

This whole conspiracy became even more widespread when later the same Robert Gillett Jr. stated that his words about the prank with the flashlight were not true.

“My girlfriend broke up with me, so I was in a bad mood. I just told them what they wanted to hear, that it was a lantern. But it wasn’t a lantern. They pulled something out of the pond. I really don’t think they were aliens. I never called it a UFO. Official people did, “said the teenager.

This case became a real tangled tangle, in which it is still not clear what was true and what was a lie, what was just rumors, and what actually happened. And over the years, everything became even hazier.

What do you think about this UFO Crash In Pennsylvania?