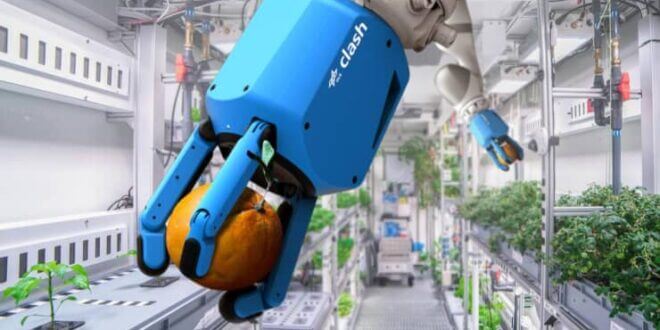 Whether from continent to continent or coast to coast, people have always made their big moves together with plants. Traveling away from Earth would be no different. Our success on other worlds will rest, in part, on the supple stems of plants.

“Plants are things that we take with us as explorers,” says Anna-Lisa Paul, the co-director of the University of Florida Space Plants Lab. “They’re part of our core heritage whether we think of it or not.”

On all the brief forays into space so far, astronauts have sustained themselves almost entirely on packaged food. But if humans ever hope to set up long-term habitats on the moon or Mars, their physical and mental health would benefit from the ability to grow plants.

Space agencies from various countries have spent decades developing the technologies necessary to bring farming indoors, and now the German space agency and NASA are pushing the state-of-the-art of soil-free gardening to its limits with a greenhouse in Antarctica and laying the groundwork for their next act: farming systems where the farmers are optional.

NASA, Soviets and history of indoor farming experiments
NASA has worked to advance space agriculture, in part because a robust plant collection could serve as the ultimate multipurpose life-support system, producing calories and nutrients to eat, making oxygen to breathe and taking carbon dioxide from the air.

Building on Soviet research, NASA funded a variety of agricultural programs in the 1980s and 1990s. In a collaboration with the University of Wisconsin, researchers discovered that they could replace hot and cumbersome incandescent grow lights with a particular blend of LED lights. Red LEDs, which were more energy efficient, let plants photosynthesize. But plants also needed blue light, or they would grow too tall and spindly. The work led to a patent, and today’s indoor farms often feed plants on a similar diet of red and blue photons — which is why indoor farms often appear bathed in purple light.

“NASA was genuinely in front of the curve on this, promoting their use for these applications,” says Raymond Wheeler, a horticultural scientist who has studied space agriculture at the Kennedy Space Center (KSC) for decades.

In the late 1980s, Wheeler worked on a KSC team that grew wheat, potatoes, soybeans and other crops with their roots immersed in a nutrient solution, stacked on four rows of shelves inside a large cylindrical chamber — likely the first execution of a vertical farming system that has now developed into a multi-billion-dollar industry.

Focusing on ways to sustainably meet the ever-growing demand for food, companies around indoor vertical farming has seen a boom in recent years. New York-based start-up Bowery Farming announced a $300 million funding round in June, the largest in the industry thus far, valuing the company at $2.3 billion. Kimbal Musk, brother of Elon Musk, is the co-founder of Square Roots. Newark-based AeroFarms in April broke ground on a 136,000-square-foot-farm in Virginia set to open in 2022 that it says will be the largest aeroponic indoor vertical farm in the world.

Antarctic robots and raising crops for other worlds
The German Aerospace Center (DLR) sent twin shipping containers to Antarctica in the fall of 2017 in what amounted to a remote dress rehearsal for raising crops on another world.

The EDEN-ISS Antarctic greenhouse, now entering its fourth growing season, continues to prove that you do not need fertile ground or even sunlight to produce vegetables. It builds upon the LED blend pioneered by the early NASA experiments to deliver “recipes” tuned to the needs of each specific vegetable with programmable arrays of red and blue lights.

Roots poke through beds of fibrous minerals and dangle into empty trays below, where automated nozzles spray them with a nutrient-rich mist every few seconds. Water is largely recycled, except when the nutrient solution gets depleted and needs to be dumped and replaced every few months. The entire system plugs into the neighboring German Neumeyer III research station, from which it continuously draws about 10 kilowatts of power — comparable to eight U.S. households.
The first year, a DLR researcher named Paul Zabel ran the 135-square-foot greenhouse and collected nearly 600 pounds of veggies including cucumbers, lettuces, other leafy greens, tomatoes, radishes and herbs.

But despite the greenhouse’s automated lighting, watering, and fertilizing systems, Zabel still spent three to four hours a day just keeping EDEN-ISS functioning, Schubert says. And in space, human labor will be just as precious a resource as water and air.

Having an AI system taking care of the greenhouse is preferred, according to Daniel Schubert, the project coordinator of the Antarctica experiment, “in the case that the astronauts just have no time.”

This year, NASA has sent one of their own researchers, Jess Bunchek, to test out the U.S. space agency’s preferred strains of space veggies in EDEN-ISS. Another major research goal will be to collect detailed data of what tasks take up the most time. Bunchek will carry an eight-sided programmable timer that she will use to track the hours she spends on eight categories of work.

One of the major time-sinks has been repairing breakdowns, or “off-nominal events” in the doublespeak of space exploration. A burst pipe, for instance, might take all day to fix. Topping the list of lessons learned from EDEN-ISS is that future facilities need to be simpler. “We will definitely scale down the technology complexity for a space greenhouse,” Schubert says.

Space imaging for plant stress
Next in the pipeline, DLR is currently designing a new facility — a semi-inflatable, space-rated cylinder — with a few new tricks.

One improvement will be advanced remote monitoring. Anna-Lisa Paul and her colleagues at the UF Space Plants Lab are developing software that can take GoPro images and recognize how a plant’s appearance changes with stress. When a plant needs water or has been exposed to too much salt, the colors of light it absorbs and reflects shift subtly in ways imperceptible to the human eye. But the lab’s system can spot salt stress in just fifteen minutes, and drought stress in about an hour, according to Natasha Sng, a researcher at the Space Plants Lab, much earlier than a human can.

The researchers have been testing their system at EDEN-ISS, but the greenhouse has been running too smoothly to know how well the monitoring system works. “We’ve been watching a lot of success happen,” says Robert Ferl, co-director of the Space Plants Lab.

Soon, the researchers plan to introduce intentional malfunctions and see if the lab’s system can catch them.
In another major step toward automation, the DLR is developing robotic arms to be mounted on a rail suspended from the greenhouse roof. These dexterous machines, powered by AI, would photograph the plants from various angles, prune dead leaves and shoots, and even harvest produce, which Schubert estimates are the most time-consuming activities after repairs.

The end goal is a greenhouse that, if not completely autonomous, could at least be run fully by operators on Earth. Such a facility could touch down on the moon or Mars ahead of astronauts and have a basket of cucumbers and tomatoes ready for their arrival. Astronauts would have the option of gardening, which can bolster mental health, but the crops should be able to thrive on their own when astronauts have more pressing tasks.

The DLR’s roadmap aims to have their next-generation facility ready to fly by 2030. “I still need to send [Elon] Musk an email and ask if we can design his greenhouse,” Schubert said.

And developing the ability to farm in space isn’t purely about going to Mars. A two-way street has always connected space agriculture with industrial agriculture. As climate change makes many areas of the globe less suitable for farming, the technology to split food production from weather and natural resources will likely become more essential.

“My dream would be that we all live in ecological biospheres on our own,” Schubert says. “We would be completely independent from the planet Earth, and we would leave Earth to its own so it can recover.”