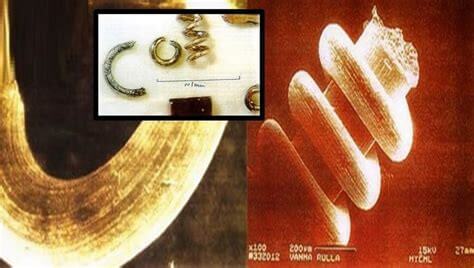 In the Ural Mountains in 1992, a Russian geologist accidentally discovered what would later be known as Russian nano spirals. The discovery of the Russian nano spirals, or more correctly miniscule spiral-shaped objects, was made while investigating mineral deposits. The artifacts were made from copper, tungsten, and molybdenum. The objects ranged in size from the largest that was about 1 1/18 inches to the smallest which was only 1/10,000th of an inch. These curious findings bore an eerie resemblance to the control elements used in recently developed “nano-machines” all of the pieces were found at depths between 10 and 40 feet, embedded in gravel and detritus deposits. These deposits corresponded to the lower region of the Mikulinsk Horizon of the upper Pleistocene Era, suggesting that the objects themselves may be around 100,000 years old. There is no possible way such objects could be embedded so deeply without having ancient origins. Our History Is Still A Mystery – Russian Nano Spirals