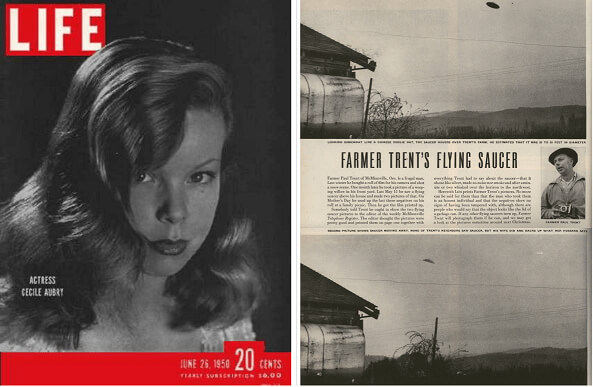 Soon after World War II ended, Americans began seeing strange metallic objects in the sky that were sometimes hovering over their premises. Three years after the famous Kenneth Arnold sighting, a farming couple took the best shots of a 100-feet flying disc, hovering at a close distance from their farm about 10 miles from McMinnville, Oregon, the United States. Skeptics tried hard to prove the photograph a hoax but it was 100% authentic.

On May 11, 1950, Evelyn Trent went to her farm to finish her evening chores, she fed her chickens and rabbits. While walking back to her house, she saw a disc-shaped flying saucer, silently hovering over her farm. At around 7:45 p.m., she shouted to call her husband. Evelyn ran to the house and told her husband Paul to come out.

He also saw the strange craft that made no noise and there was no sign of propulsion. He quickly grabbed his Universal Roamer camera that came with 60mm roll film and took two shots of the object from different angles. There were only 30 seconds of time interval between the two photos.

Evelyn recalled: “It was like a good-sized parachute canopy without the strings, only silver-bright mixed with bronze. It was as pretty as anything I ever saw.”

Paul could have made a fortune by selling these photos to the news agencies but he did nothing. It sounds crazy because during that time, newspapers would have bought them at a good price. The Trents were not looking for fame or publicity. Besides, they had heard stories about the secret government experimental aircraft and if it would be the one, they might get into trouble.

Subsequently, when film rolls were processed and photographs came out, Paul showed them to his friends. Later, they were sent to the weekly newspaper in McMinnville and were published on the front page on June 8, 1950.

Interestingly, the photo contained no irregular lights, clouds nor weather balloons. It was the clear shot of the unidentified craft only if the Trents had not set it up. The farming couple seemed to be decent with honest behavior. It should be noted that the photos reached the newspaper only one month after they had been taken.

The photos became a great sensation in just a few weeks of publication. The story was picked up by International News Service and the Associated Press. On June 26, 1950, Life magazine, the most popular newspaper of that time, put the two iconic UFO images on its front page, making this case historical.

The Trents’ photo grabbed the attention of the FBI and the US Air Force. They had a visit from their investigators who took their photos, questioned them, and searched their field. Although the Trents were getting some attention and seemed to enjoy it, they wished it had never happened.

The story behind the film negatives is rather confusing as it splits into two versions. According to one version, the Trents gave the negatives to producers of the American talk show “‘We the People” from where they remained lost for 17 years. Another version comes from UFO historian Richard Dolan where he stated that the Air Force took the negatives and never returned them.

In the 1960s, when the US Air Force began its investigation into UFOs, the negatives of McMinnville UFO photographs were found in the file of United Press International. Later, the Condon Committee took charge of it.

Planetary scientist William K. Hartmann studied the negatives and found out that the craft was only a kilometer away from the field when being shot by Paul. Additionally, it was around 100 feet in diameter.

Hartmann wrote: “This is one of the few UFO cases in which all factors investigated, geometric, psychological, and physical appear to be consistent with the assertion that an extraordinary flying object, silvery, metallic, disc-shaped, tens of meters in diameter, and evidently artificial, flew within sight of two witnesses.”

Another credible source to prove the authenticity of the photos is an American optical physicist Dr. Bruce Maccabee who believed the Trents’ photos were real.

Paul Trent died in 1998, a year after his wife. He eventually just wanted to put the whole UFO thing behind them.