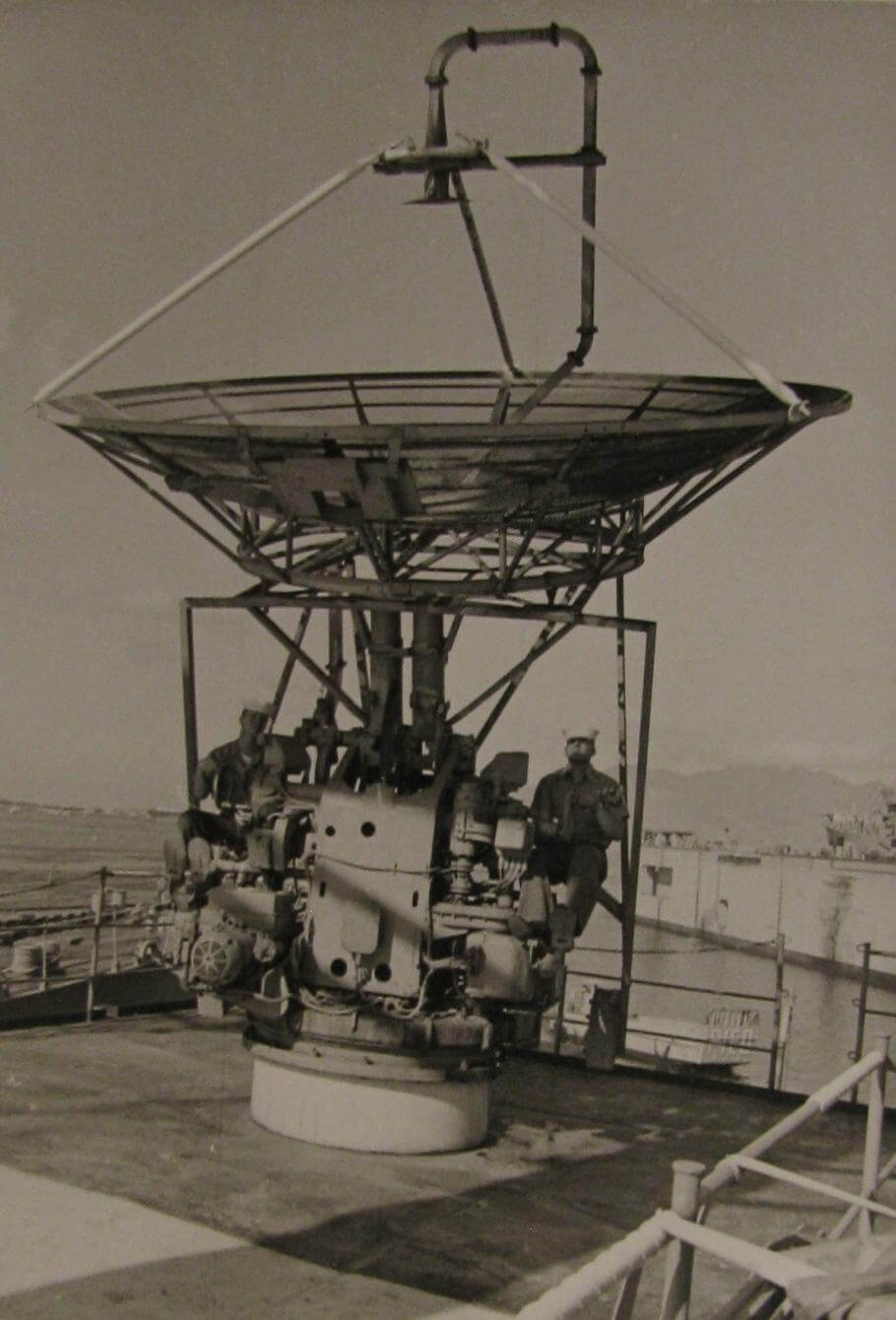 On July 24, 1954, the Naval Research Laboratory (NRL) at Stump Neck, Maryland (now the Naval Surface Warfare Center in Indian Head, Maryland) sent and received the first human voice transmission to be bounced back to Earth from the Moon.

Moon bounce, also known as Earth-Moon-Earth (EME) communication, is a technique that sends radio wave transmissions from Earth to the Moon. The transmission is then reflected, or bounced, off the surface of the Moon and captured by an Earth-based receiver. The technology held promise for secure communications with Navy ships.

By January 1956, the U.S. Navy could transmit teletype signals to and from Stump Neck and Wahiawa on the island of Oahu, Hawaii. By January 1960, the Navy’s Communication Moon Relay System began transmitting two-way radio communications.

Around midnight, on December 15, 1961, Chief of Naval Operations Adm. George W. Anderson and Dr. R.M. Page, director of research for the NRL sent a message from Stump Neck to the USS Oxford in the Atlantic Ocean, approximately 2,414 kilometers (1,500 miles) from Maryland, via the Moon. This was the first time the Navy successfully transmitted a message from a ground station to a ship.

The event was not secret. The Associated Press wrote a small piece on it that was picked up and printed in the Washington Post on December 17. Following the success of the transmission, five-meter (16-foot) steerable parabolic antenna and transmitter were installed on the Oxford allowing for two-way communications.

At the same time the U.S. Navy was developing Moon-bounce transmissions, the National Security Agency (NSA) had begun developing signals intelligence (SIGINT) collecting ships. In 1961, the NSA commissioned its first SIGINT ship, the Private Jose F. Valdez, which cruised the coast of Africa in the Atlantic Ocean. Soon thereafter, the Joseph E. Muller was converted. Following the success of the Valdez and Muller, the Navy took on a larger role in the program. The Navy operated the next five ships added to the program for the NSA.

The ships, called Auxiliary General Technical Research (AGTR) ships, were much larger and faster converted World War II LIBERTY and VICTORY class cargo-ships. These “research” vessels carried equipment and personnel to conduct oceanographic experiments to create a valid cover for their covert activities. The first was the USS Oxford, which received the first Moon-bounce transmission test in 1961, re-designated as an AGTR. In 1963, the Navy added the Georgetown (AGTR-2) and the Jamestown (AGTR-3). In 1964, it added the Belmont (AGTR-4) and the Liberty (AGTR-5).

These SIGINT ships needed a secure ship-to-shore communications system and high-frequency radio was unreliable due to the remote locations of the ships and vulnerability to foreign direction finding. A Moon-bounce transmission was the solution.

Following the 1961 Moon-bounce success, the Navy continued development on what was called the Technical Research Ship Special Communications System (TRSSCOMM). TRSSCOMM allowed a ship, anywhere in the world, to transmit a message by beaming microwave transmissions toward the Moon. The Moon, acting as a passive reflector, would bounce the emission back to receiving stations on Earth, located at 90-degree quadrants around the globe.

The first ground station for TRSSCOMM was located in Cheltenham, Maryland. The other three were Wahiawa, Hawaii; the village of Oakhanger, England (south-west of London); and Sobe on Okinawa, Japan. By 1964, TRSSCOMM had been researched, developed, tested, evaluated, and installed on the Oxford, which activated a link with Cheltenham to prove the feasibility of the program. The Navy then implemented the system in all the AGTRs and all four ground stations.