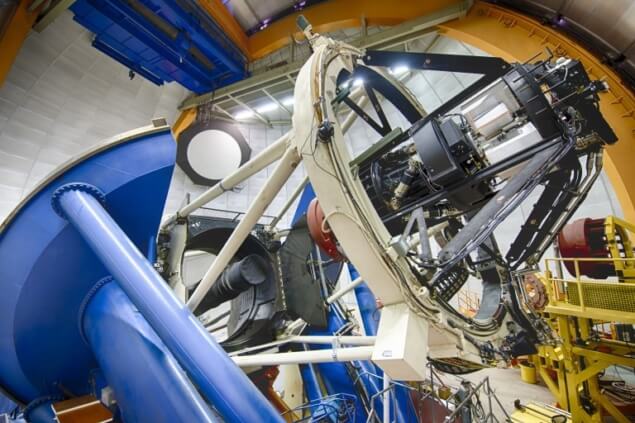 Astronomers sifting through data from the Dark Energy Survey (DES) have spotted a large Oort Cloud object approaching the outer regions of the solar system.
The discovery has caused ripples of excitement within the planetary science community because of the object’s unusually large size – initial estimates suggest it may be as big as 130–160 km across, substantially bigger than some of the largest comets. Studying the object could also give researchers insights into an enigmatic process in the solar system.
Catalogued as C/2014 UN271, the wandering visitor was found in archival data captured by the DES project, which investigates the cosmological mystery of dark energy by photographing distant galaxies.

“The object appears in about thirty images out of the [approximately] 80,000 that were taken over six years for the survey,” Gary Bernstein of the University of Pennsylvania, who co-discovered C/2014 UN271 along with PhD student Pedro Bernardinelli, tells Physics World. “Pedro instantly recognized it as being of special interest because of its nearly-escaping orbit and the great distance at which it was first seen,” he adds.

C/2014 UN271 seems to have come from a region some 10,000–20,000 times farther from the Sun than Earth. This is within the Oort Cloud – an immense shell of icy objects thought to envelop the entire solar system. On its current trajectory, the object takes nearly 5.5 million years to complete just one loop of its orbit.
The object is probably rich in ice like a comet and is currently around three billion kilometers from the Sun. It will reach its closest point, known as perihelion, in 2031. At that time, it will be positioned below the plane of the solar system, near the orbit of Saturn.

Part of the interest in C/2014 UN271 is that it may be something of a transition object. Astronomers believe that many of the long period comets, that occasionally appear with bright tails, actually come from the Oort Cloud. Stars wandering near the Sun can nudge these objects from their positions and over millennia they work their way inwards, with the gravity of the giant planets tweaking their paths on each visit until they reside where we see them today.
“The fact that [C/2014 UN271] has a perihelion so far away from the Sun might be telling us that it’s done this a couple of times but is still in that process of eventually becoming some of those long period comets we know and love,” explains Meg Schwamb a Kuiper Belt and Oort Cloud expert at Queen’s University Belfast.
Scientists will be keen to see how C/2014 UN271 behaves on its long journey. Will it, for example, exhibit outbursts in activity, or even disintegrate? The Vera C Rubin Observatory, due to begin its ground-breaking survey from Chile in 2023, should be in a prime position to record whatever happens. “With Rubin Observatory coming back and imaging the sky every three nights we’re going to get an effective movie of how this object has evolved over a decade,” says Schwamb.

Initially, C/2014 UN271 did not appear to have a cloud of material – called a coma – around it. However, astronomers using the Las Cumbres Observatory network announced in an Astronomer’s Telegram bulletin on 22 June that they have detected such a feature using a large telescope in South Africa. The emergence of a coma could be the result of ices sublimating from the body’s surface.READ MORE‘Oumuamua: visitor from another star

“There’s a complex range of processes involved, with much yet to understand, and this is the biggest of the small worlds on an orbit from the Oort Cloud that we’ve seen go through that start-up of activity,” says Michele Bannister, an outer solar system specialist based at the University of Canterbury.
Some researchers have suggested C/2014 UN271 could be a destination for a sample-return mission. However, Stephen Lowry, a comet expert at the University of Kent says “There wouldn’t be enough time. It can take decades to develop such a spacecraft mission.” C/2014 UN271 is also likely to be out of reach of Europe’s upcoming Comet Interceptor mission due to its distance from Earth’s orbit, he adds.
Nevertheless, astronomers will likely have much to scrutinize as C/2014 UN271 creeps closer to the Sun. “More heat should mean more activity, but its perihelion is still really distant from the Sun, out beyond Saturn’s orbit,” says Bannister. “It’ll be exciting to see just how much it brightens over the coming years.”