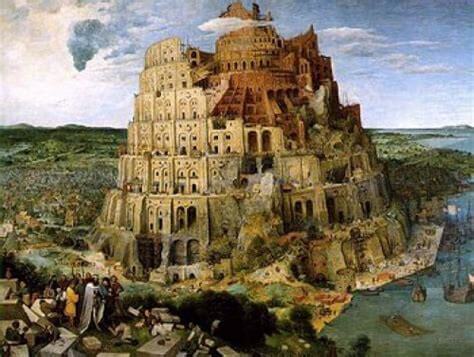 Nimrod led the tower of Babel rebellion. Was he a Nephilim giant?

And the sons of Ham; Cush, and Mizraim, and Phut, and Canaan. And the sons of Cush; Seba, and Havilah, and Sabtah, and Raamah, and Sabtechah: and the sons of Raamah; Sheba, and Dedan. And Cush begat Nimrod: he began to be a mighty one in the earth.  He was a mighty hunter before the LORD: wherefore it is said, Even as Nimrod the mighty hunter before the LORD. And the beginning of his kingdom was Babel, and Erech, and Accad, and Calneh, in the land of Shinar.  Out of that land went forth Asshur, and builded Nineveh, and the city Rehoboth, and Calah,  And Resen between Nineveh and Calah: the same is a great city. – Genesis 10:6-12

Just as Canaan received a special distinction in his genealogy, Nimrod gets several extra verses! Clearly this is someone of special significance. Nimrod was the first murderer and conqueror in the post-flood world. He was the founder of the city of Babylon which became a center of pagan, satanic idolatry, much of it with various versions of Nimrod himself being worshiped as a god. His name, which means “to rebel” or “let us rebel” indicates his disposition. He was an enemy of God and at the time was Satan’s main servant on Earth. He is credited for leading the effort to build the tower of Babel, a religious temple used to access the angelic realm through pagan ritual. The Tower of Babel was also the first attempt at a global government, led by Nimrod and an attempt for man to reach the spiritual realm and “godhood” without The Lord (to which God swiftly responded by destroying the tower, confusing the languages of all the people of the world and scattering them all over the Earth). Was this grandson of Ham possibly a Nephilim?
It is interesting to note is that the verse 9 states that Nimrod “began to be a mighty one in the earth.” The term for “mighty one”, gibborim, is the same Hebrew phrase used to describe the Nephilim giants in Chapter 6 of Genesis who were “mighty men”. It is also the same term used to describe the giant Goliath in 1 Samuel 17:51. Was Nimrod a Nephilim? In mythology, Nimrod is known by many names, among them Gilgamesh and Osiris, who were worshiped as gods. In Sumerian texts he is described as “2/3 god, 1/3 man.” The Hebrew word for “began” in the verse is chalal, which means, “to profane, desecrate or pollute oneself, begin, ritually or sexually”.

That which is observable and improvable in these verses is the account here given of Nimrod, v. 8-10. He is here represented as a great man in his day: He began to be a mighty one in the earth, that is, whereas those that went before him were content to stand upon the same level with their neighbours, and though every man bore rule in his own house yet no man pretended any further, Nimrod’s aspiring mind could not rest here; he was resolved to tower above his neighbors, not only to be eminent among them, but to lord it over them. The same spirit that actuated the giants before the flood (who became mighty men, and men of renown, ch. 6:4), now revived in him, so soon was that tremendous judgment which the pride and tyranny of those mighty men brought upon the world forgotten.

The final piece of evidence to consider is that in the Septuagint, the oldest version of the Old Testament, the same verse from Genesis reads:

So from just the text of scripture it appears that through some form of defilement and/or occult ritual, Nimrod. the grandson of Ham, was transformed into a giant. This would not be the only time a human king was transformed into a different creature. Please note that in Daniel 4, King Nebuchadnezzar of Babylon, was literally transformed into a “beast” and lived as an animal for seven years. And this was at the pronouncement of “watchers” and “holy ones” (the same type of angels that are named as being involved in the Genesis 6 illicit relations in extra-biblical texts like the Book of Enoch). (B&E: There is much more to write on Nimrod and his role in Bible scripture that will be covered in a forthcoming article. In the meantime, we strongly encourage the reader to research and explore this figure).

Ham’s son Mizaraim also contributed to the Nephilim lineage. In verse 14 we have the first mention of the Phillistines (whose forefather was Philistine), the nation of the giant Goliath. Calshuhim was the father of Phillistim and his family later resided in Capthor in the Promised Land. So we see the direct origins of the Philistines, one of the most heated enemies of the Israelites, who also carried the Nephilim gene.
In fact, as will be shown, the Philistine nation was the final “hideout” for the remnant of the Nephilim giants. And they can be traced back to Casluhim, the son of Mizraim and grandson of the evil Ham.
Canaan

The name of Canaan should be the most familiar as it was the land that bore his name that was the Promised Land that The Lord reserved for the Israelite’s after they escaped out of Egypt thanks to God miracles and the leadership of Moses. The fact that they were in the Promised Land the Israelite’s were supposed to inhabit was no coincidence! The Philistines were worshipers of demons, fallen angels and Satan. And the Nephilim giants among them were working to attack God’s chosen people. Canaan’s line contains many of the enemies of God:

And Mizraim begat Ludim,  And Canaan begat Sidon his first born, and Heth,  And the Jebusite, and the Amorite, and the Girgasite, — Genesis 10:14-16.

The Jebusites, the Amorites and Gegusites, all cousins of Nimrod, are mentioned time and time again with reference to the Israelites capturing the Promised Land. These families were usurpers in the Promised Land and carried lots of the Nephilim gene. This is once again why God had to deal mercilessly with these nations. It cannot be stressed enough that the Nephilim threatened not only the existence of the human race itself but the ability of an all-human Messiah to eventually be born as well. Note God’s instructions to Moses on how to battle against these children of the cursed Canaan:

Notice that God describes these nations as “greater and mightier than thou” to the Israelite’s. The physical and military advantage was clearly on the side of the enemies of God – the nations that were home to the Nephilim giants. But what gave the Israelite’s the ultimate edge was that The Lord Himself was going to supernaturally intervene early on in the conflict to deliver the enemies of Israel so they could be defeated. This point is not discussed enough: God fought against and defeated the early post-flood Nephilim.  This shows the severity of the matter. The Lord was no longer allowing these superhuman, powerful hybrids to dominate humanity. Thus He not only says to wipe out these nations, but makes a specific point of prohibiting any marriage between them. God was bringing the spread of the Nephilim genes to an end.

Lord willing, at this point it is clear that giants did indeed exist in the Bible and in large number. Satan, who has constantly sought to stop God’s plans and destroy the souls of humanity, used a select group of angels to interbreed with human women and try to corrupt human DNA. By altering humanity from being no longer fully human, Satan could ensure that a pure human Messiah would never be born. To counter Satan’s offensive, God sent the global flood judgment to punish those angels who committed folly, destroy the Nephilim and save the existence of the human race. The flood ensured the Messianic bloodline was preserved so that we could have a chance to go to Heaven. It was as an act of love of mercy on God’s part to save a people that had rejected him to follow Satan’s minions and their God-given powers.

The bloodline of the Nephilim after the flood can be clearly traced to Ham, Noah’s evil son who brought a curse upon his own child, Canaan.  But this is just the beginning. In Part 2, “Nephilim Giants – Enemies of God in the Bible” (which is now available!) we will continue to examine the post-flood Nephilim lineage from the perspective of the righteous men of God who fought against them throughout the Old Testament in the continuing chess match between God and Satan and the Sons of God against the seed of the Serpent. The article will also look that as the number of Nephilim giants on the Earth decreased, they soon became smaller in size. And we will reveal a modern occult mystery so secret even Wikipedia states it do not have the answer for it! These and other revelations will be detailed, all of this from the pages of Holy Scripture.

Although we have completed all 7 parts of the Nephilim Series the study is far from over. Beginning And End is very pleased to announce the release of the first comprehensive Biblical study on the giants and the Genesis 6 account – Judgment Of The Nephilim.  We have contributed a great deal of our own research to this book and it is filled with startling revelations on the giants that you will not find in any other book on this topic.  Judgment Of The Nephilim surveys every passage in the Holy Bible on the giants – many which are rarely connected to the Nephilim.  Among the many questions it addresses are:

All these answers and many, many more from the Bible. Once our ministry started researching the Nephilim in-depth we realized there was a great deal of untapped, rarely quoted Christian and Jewish writings on the giants that answer many, many of the questions we all have on this thought-provoking topic. Now we have the answers. This is a must-own book if you are a reader on the subject of the Nephilim giants. The trailer is below:

Amazing information hope you enjoy ! Form your own opinions remember we all have one !

2 thoughts on “Nimrod led the tower of Babel rebellion. Was he a Nephilim giant?”