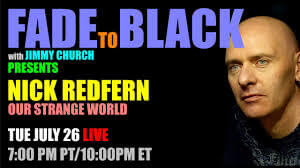 Tonight, Tuesday on FADE to BLACK: Nick Redfern joins us for a full night of Our Strange World… UFOs, Time Travel, Chupacabra, Bigfoot, Conspiracy, Ghosts, and Lost History. Nick works full time as an author, lecturer, and journalist. He writes about a wide range of unsolved mysteries, including Bigfoot, UFOs, the Loch Ness Monster, alien encounters, and government conspiracies. His books include For Nobody’s Eyes Only; Monster Files; The World’s Weirdest Places; The Pyramids and the Pentagon; Keep Out!; The Real Men in Black; The NASA Conspiracies; Contactees; and Memoirs of a Monster Hunter. He writes for UFO Magazine and Mysterious Universe. Nick has appeared on numerous television shows, including Fox News; The History Channel’s Ancient Aliens, Monster Quest, and UFO Hunters; VH1’s Legend Hunters; National Geographic Channel’s The Truth about UFOs and Paranatural; BBC’s Out of this World; MSNBC’s Countdown; and SyFy Channel’s Proof Positive.