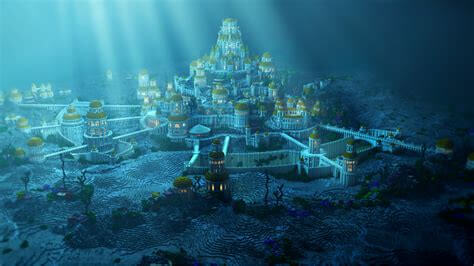 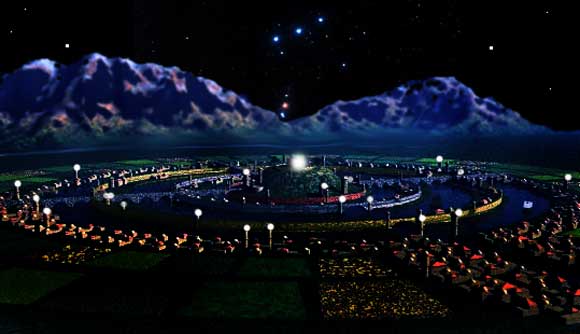 The origins of human civilization are still a subject of constant speculation and arguments. We can be pretty sure that our own world has advanced as a result of the achievements of the Egyptian and Sumerian civilizations, but the question arises of how they developed their own high standards.  Many writers and researchers have placed Atlantis in different parts of the globe, but up to now there was no clear path connecting this legendary land to the first established civilizations. Using the latest linguistic and genetic information I propose the missing link …

The theme of the existence of an early civilization turns up in many old myths and legends. If there is a grain of truth in these stories, where could it have been situated? The most well known is called Atlantis and is placed by Plato on an island in the Atlantic Ocean. This incredible information which, according to the great philosopher was handed over to Solon, a famous Greek poet and politician, by the Egyptian priests of the temple Neith in Sais, could be a figment of Plato’s imagination. The myth of Atlantis is probably related to the Minoan civilization, which existed on the islands of Crete and Thera, and which was destroyed in 1625 BC by the eruption of the Santorini volcano.

We know that the founders who reached Sumer and Egypt possessed, right from the beginning, essential practical knowledge. Therefore it had to have been already applied earlier and probably came into existence in one place, rather than simultaneously in many different locations. Archaeological discoveries show that Sumerians appeared in Mesopotamia, probably about 5,500 years ago. However it is not possible to establish where they arrived from. The Sumerian language differed from the tongue  of the indigenous population. We can learn about their language from the tablets covered with cuneiform writing which originated about 3,000 years BC. The Sumerian language had an entirely different vocabulary, grammar and syntax to the languages of the local Semitic tribes.

According to Dell Hathaway Hymes, a well known anthropologist and linguist, there is no doubt that the Sumerian tongue belongs to the group of proto-Ural-Altaic languages, similar to the Finno-Ugric and Turkish languages. The results of his examination show that out of one hundred Sumerian common root words from the Hymes list, more than fifty percent also appear in Turkish and Hungarian.

The recent findings of the genetic examination of the world population confirmed that the groups speaking Ural-Altaic languages emerged about 12,000 years ago from eastern China and moved slowly west through the areas of Altai and the Caspian Sea to north-eastern Europe. Therefore a plausible area for the original homeland of Sumerians may be the part of Central Asia which is bounded by the River Irtysh in the east and the River Volga in the west. Only in this area, as the most likely original home-base for Sumerians, could they have had close linguistic contact with Ural-Altaic peoples.

If we take into consideration that the dwellings of Sumer, Egypt and the Indus valley civilizations were in a hot and dry climate, in the valleys of large rivers it is probable that the  proto-civilization also existed in similar climatic and geographical conditions. A semi-desert area in the region of the Aral Sea with two large rivers would meet these requirements. Amu Daria flowing into the Aral Sea had enough water to irrigate fields and to support a large population. This hypothetical proto-civilization could probably have come into existence on their banks. Climate research results show that thousands of years ago this river was more abundant than at present, and that its branch also flowed into the Caspian Sea.

Greek sources mentioned the existence of civilizations in these parts of the world. The ancient Greeks believed that somewhere in the North or East was a land inhabited by Hyperboreans, a long-lived, clever, peaceful race living in prosperity. They also believed that Apollo and Artemis were gods in this faraway land. Some Greeks  such as Aristotle  considered that this land could lie in the regions of Scythia – present Uzbekistan, Kazakhstan or Altai. According to legends the Hyperborean  land was hot and sunny, therefore could not be placed in the north. It is known that  from this area originated the progenitors of the ancient Greeks, since the Greek language is related to proto-indo-European  and Vedic and Sanskrit. The fact, that the concept of Atlantis has survived in the Greek tradition through thousands of years indicates Greek connections with New Atlantis.

Existence of an early civilization in this area is also mentioned by Chinese sources which state that in the third millennium BC “Sons of the Heaven” spread all over the world, propagating new beliefs and bringing new knowledge from their base in the Karakorum mountains, in the western part of China, which is not far from Amu Daria. Sons of the Heaven?

Research conducted in the 1970s by Viktor Sarianidi, a Russian archaeologist of Greek origin, indicates that in the area of Bactria at the upper Amu Daria in the vicinity of Gonur-Depe in present day eastern Turkmenistan, existed in the third millennium BC the very advanced Oxus civilization whose farming was based on irrigation. This civilization knew writing and mastered bronze technology, and had good relations with the civilization in the Indus valley. It is possible that the Oxus civilization could be a continuation of the earlier civilization which existed in this area.

It is also noteworthy that, according to the Zoroastrian holy scripture Avesta, Zoroaster, a creator of the first monotheistic religion who lived in the region of Bactria, died in the Pamir Mountains where Amu Daria has its source.

It might be worth mentioning that the lapis lazuli found in Sumer and in  the early royal tombs in Upper Egypt  came from  mines in the area of Bactria which were already working in the 4th millennium BC.

The coming into existence of New Atlantis

Study of the Sumerian and Egyptian civilizations shows that  right from the beginning they possessed  advanced knowledge of modern agriculture, engineering, new technologies, new architecture,  mathematics, astronomy, new forms of management, and introduced new advanced religious beliefs, education and the system of justice. Since this knowledge did not exist on Earth and there was not enough time to develop it, it is proposed that it had to be brought here by intelligent extraterrestrial beings. This hypotheses presented below is described in detail  in my book We are not alone in the Universe*.

In order to initiate the further development of mankind, the intelligent beings arrived on Earth and probably settled in Bactria, in the region of the river Amu Daria. Here they established the economic foundations of New Atlantis, securing the safe and stable existence of the indigenous Altaic population, which used a proto-Sumerian language. Before commencing the transfer of information essential for the further development of mankind, the extraterrestrial beings had to first prepare a suitable team of people that would be able to learn and assimilate this knowledge. Since buying young girls for wives was then the accepted custom, an appropriately large number of women would have been easily gathered. In order to hand the new genes over to them they might have used the method of artificial insemination. With the help of appropriate pharmacological means, this event could be blotted out from the memory of these women, and perhaps, became in many religions a source of beliefs in the virgin birth of gods.

After a few generations the number of genetically improved members of the community increased enough to allow the process of building a  new civilization to commence. The indigenous, primitive population also played an important role, constituting the basic workforce needed for agriculture and performing various physical labors.

As a result of the education and special upbringing of the intelligent members of the community, a new elite arose which possessed technical knowledge and the abilities to perform managerial tasks. As the number of members of the new elite increased, further development of the civilization could take place. Proto-structures of the new society appeared with the novel organization of management and the new justice system. For land under cultivation an irrigation system was built and new agricultural technologies were introduced. People learnt the principles of metallurgy, civil engineering and medicines.

The new elites, after several generations finally assumed total control over community affairs, preserving in their tradition the principles that all material goods and all lands belonged to the gods. The same rules were obeyed later in Sumer and Egypt, where the priests and pharaohs had not considered themselves to be owners, but only administrators of earthly goods.

It is worthwhile emphasizing that within the new elites neither dominating groups nor political leaders emerged because everybody was equal before the gods. This is supported by the fact that after arriving in a new place no homogeneous state was created, but several independent city-states. This happened in Sumer and in Egypt. It is interesting that Atlantis as described by Plato consisted of ten independent kingdoms, therefore the Plato story could have  had some connections with the pronto-civilization.

Probably in about the middle of the fourth millennium BC, after the full formation of the civilization and sufficient increase of the educated elite numbers, missionary expeditions commenced. The purpose of theses expeditions was to spread new genes and to teach other groups of people how to build a civilization. The character of these missions was peaceful and they were not military conquest expeditions, as confirmed by the fact that small groups of envoys arrived in Sumer and Egypt.

Taking into account that in those times there were very few roads, and traveling across mountains was very treacherous, the safest and fastest way of transport was by water. Probably the first missions used the river Indus which is relatively easily accessible from Bactria. The travelers moved down the river to the Indian Ocean, leaving behind in the Indus valley settlements which became the seed of a new civilization. Traveling west along the coast they arrived at the delta of the two rivers Euphrates and Tigris, where they built Sumerian city-states. The other groups followed the coast further and arrived on the shores of the Red Sea, which are only about a hundred and fifty miles from the River Nile and Upper Egypt. A map showing traveling routes is shown in Fig.1. This traveling scenario is supported by the later Sumerian trading routes which reached the Indus valley and Africa. Fig. 1 Map showing the  traveling routes of the proton-civilization missionaries

The missionaries  traveled not only to Sumer and Egypt but probably migrated in other directions, spreading knowledge all over the world. It is possible that they reached China in the 3rd millennium BC as well as other parts of Eurasia.

It is possible that the descendants of the New Atlantis population spread all over Europe. This is supported by the existence of mysterious megalithic structures discovered in Malta, Spain, England, Ireland and Scandinavia, which were built from the fourth to the second millennium BC. It is interesting that the majority of them are in coastal areas, so it seems probable that they were built by sea travelers.