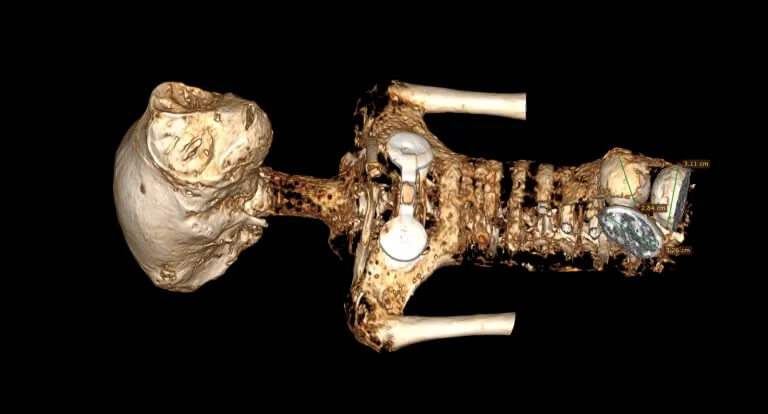 New and better tomographies were conducted in Lima, Peru. Especially on the 60 cm long tridactyle humanoid named “Josefina” that not only has 3 fingers in hands and toes but also what seems to be three eggs inside her abdomen. Like a reptilian humanoid. The 128 cuts per square inch tomographies show that soft tissue is connected.  The “eggs” also show some structures inside.

The specimens are being kept and studied in the Universidad Nacional San Luis Gonzaga located in the coastal town of Ica, Peru.  However, the Ministry of Culture wants to confiscate them.  Before, they said that the mummies were not part of the national patrimony and now they say that they are. From the very beginning, they were against the possibility of these bodies (found by grave robbers) being a unique discovery, although they were invited many times to participate in the investigation.  They also analyzed other specimens that probably were fake and generalized against all of the specimens.  It reminds me of the (now receding) anti-UFO attitude which is present all over modern institutions around the world.

Most scientists (anthropologists and archaeologists) associated with this Ministry state that the mummies are obvious fakes or that they have been assembled either with modern materials or by using ancient human and animal bones. But there also is good scientific evidence that at least some of them are genuine and were living beings many centuries ago. Whether they were unknown species, human-ET hybrids, or ET remains to be found.

Even if the remnants are not easily associated with a particular archaeological site or an ancient culture, the physical samples can indicate biological anomaly or uniqueness.

One recent test conducted by the university was to insert a fine needle into one of the alleged eggs and (unlike the case if it had been a stone) it went through. Some material was extracted and I will try to find out if it was or will be tested.

An interesting event that keeps happening is the imaged energy coming out of the central part of Josefina’s chest implant. If it is not connected to a natural “artifact” or effect of the interaction between X-rays and metals (usually called the Solar Rays phenomenon) it might be anomalous.  The first image is a recent one. The second, third, and fourth were taken before the COVID pandemic. Also, the central part of the enigmatic “implant” seems to have an internal structure.

Here are some more new images. The first one shows what appear to be excessively hollow bones…perhaps like birds and reptiles?

The author trying to measure energy anomalies close to the largest (and more human-like) three-finger mummy “Maria” kept for further investigation in the Universidad Nacional San Luis Gonzaga that – against many government officials and even internal opposition from archaeologists and other scientists -is rightfully trying to arrive at the truth.