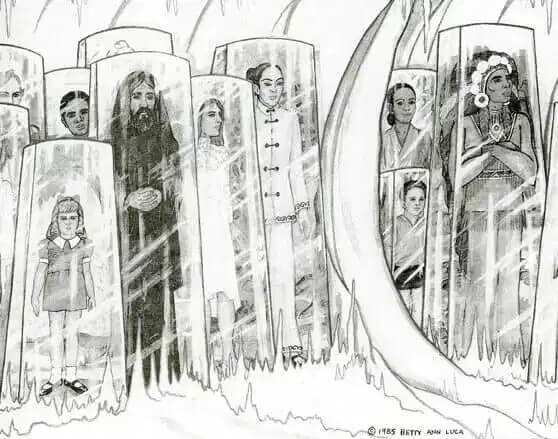 The abduction of Betty Andreasson Luca is considered to be one of the most documented cases in the history of Ufology. The woman from Massachusetts experienced multiple abductions, and her case is widely studied by UFO researchers. It became popular after the publication of the best-selling novel “The Andreasson Affair,” which came out in the late 1970s. She attended many radio shows and TV interviews where she discussed her encounter with grey aliens and even drew sketches of the incident.

Betty Andreasson was born on January 7, 1937, to Waino and Eva Aho. She went to school in Westminster and Gardner MA and had a great interest in art since childhood, which later became her passion. Betty married twice and with her first husband, she gave birth to seven children. She met her second husband Bob Luca in 1977.

According to the official reports, on the evening of January 25, 1967, Betty was at home with her seven children and parents. At around 6:30 p.m., she was busy in the kitchen when the lights in the house started blinking strangely. Soon after it, the kitchen’s window was hit by a reddish light beam, and the whole house went out of electricity. The children got terrified with the scene and Betty tried to calm them down. Her father looked out to find the source of the light and saw five strange-looking humanoid creatures walking right towards the house. Before he could understand the situation, the beings walked inside the house through the door which put the whole family in a state of shock.

One creature went to Betty’s father while the other four came to her, and one of them started talking with her telepathically. The one who was made telepathic contact with Betty was about 5 feet tall, while others were shorter than him. The description by the witnesses was similar to the modern illustration of grey aliens. They had only slits on their mouth, three fingers in one hand, and wore a blue-colored one-piece suit.

Betty was frightened but at the same time, she felt calm by the friendly nature of the beings. They did not harm any member of the family and even released her daughter from a state of unawareness. Then she was taken outside and boarded on their saucer-shaped craft with a small dome that was standing in the backyard. After that, the ship went up in the air and merged with the mothership where Betty went through medical tests and was under the effects of strange equipment. Later, she was taken to some strange place where she felt much pain which, according to her, was a “spiritual experience.”

Later that night, Betty returned home at 10:40 p.m. and found her family still in a frozen state, where one of the aliens was watching them in her absence. Then the family was put to bed by the beings and the aliens left. What’s more, she forgot about her abduction until undergoing hypnotherapy in later years.

Betty said in some of her interviews that the creatures were angelic in nature but not biblical. She is a religious person, had only some school education and did not understand much about UFOs. Only after this bizarre experience, she understood that whatever she had experienced that night was much like a UFO abduction

In 1975, Dr. Allen J Hynek posted an ad in the newspaper to learn more about the abduction experiences and asked help from common people. Betty answered his ad by sending a letter, but it was rejected due to its unusual details. It was only in 1977 when her case was deeply investigated by the experts including a solar physicist, an electronics engineer, an aerospace engineer, a telecommunications specialist, and a UFO investigator.

Her case was first investigated by Jules Vaillancourt, a Mutual UFO Network investigator in 1977. He said: “What I found most amazing about Betty was her ability to draw. The detail of the (space) craft and the beings she drew under hypnosis were such that it really made me believe there was something to this.”

He also added that the detective who had given a psychological stress evaluation to Betty and her daughter believed in her story. She even spoke the language of aliens under hypnosis. Her case investigation continued for 12 months where she and her daughter had gone through hypnosis sessions, lie detector tests, and a psychiatric interview. Both mother and daughter passed them with a genuine reaction. Author and UFO researcher Raymond E. Fowler wrote five books on her UFO experiences that include the famous “The Andreasson Affair” series.

During one of her hypnotic regression sessions, she remembered one of the early abductions that occurred to her in childhood. It took place in 1950 when she was taken from her home into a spacecraft as usual. But this time, the craft was flying toward an ocean or sea. She was terrified that the craft would crash into the water. But the ship submerged into the water and entered into a kind of tunnel. Betty could see everything underwater, as the place was filled with light. What she said next under hypnosis is so bizarre that even gave a chill to Fowler.

She saw people from all eras, different races, encased in the glass container. Fowler called it “The Museum of Time.” Betty said that people in the container were in old-fashioned clothes, and there were uncountable cubicles with humans inside at that underwater base.

Fowler wrote that when he listened to her one of the regression session recordings, his mind blew up as he found it difficult to believe. “A cold chill coursed through my body when Betty was describing people and animals enclosed in glassy cubicles in an icy cavern.”

Betty traveled a lot across the country, attending numerous TV interviews and radio shows and lecturing about her UFO experiences. She and her husband Bob Luca had been unsettled for many years until 1995 when they moved to Virginia. They lived in VA for 5 years and then moved to Florida.