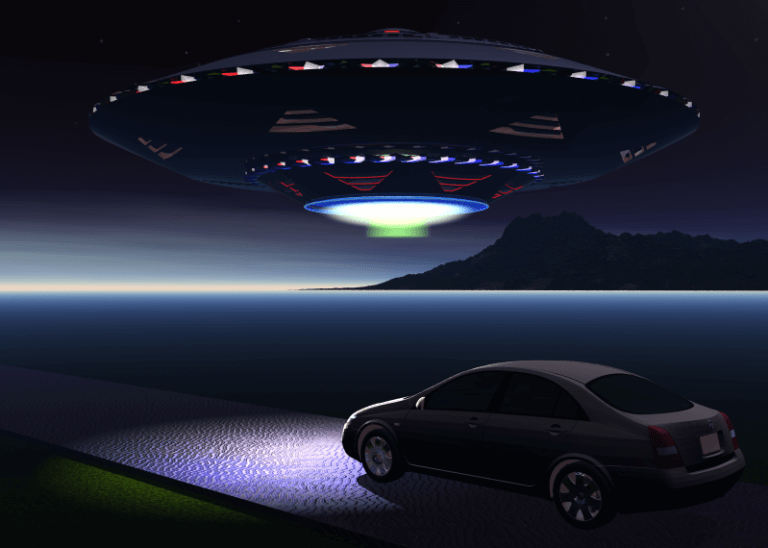 and other extraterrestrial civilizations

Miriam: In 1988 I was living a very normal, average life as a young adult. I’d just moved from a small town into the big city in Vancouver, British Columbia. And my friends and I had decided to take a road trip to my home town. And on the way up there, everything was normal. We took the drive and everything was fine. But on the return journey everything, everything changed. And right away these big balls of light… they looked like truck lights, actually; that’s what we thought that they were for the longest time… came streaming up behind us rather quickly in the car. And as that happened, we were wondering why they were traveling so fast.

Now, these particular lights followed us for hours and hours in the darkness. And every time we came up to a car or any kind of house or buildings at all, the lights would fall back and disappear.

So after hours of this going on, eventually we went through a town where we thought for sure that we had lost the lights. And as soon as we got to the other side of this town, into the forested area, the absolute moment we said: Okay, we’re clear. There’s no way they can catch up with us… and literally in the blink of an eye, there they were, these balls of light that were probably about this big. [holds hands about 12 inches apart]

So all of a sudden I screamed at her and I said: Pull over the car right now! It’s not you they want. It’s me! And I went to grab the steering wheel to pull her over, when all of a sudden she just sort of flopped, you know, like a Raggedy Ann doll, flopped her head over and started pulling over and stopped at the side of the road.

And by that time the car filled with light from every direction. And these balls of light were sitting behind the car. So at that point — I was the only one conscious at that time — when I turned from the back of the car to the front, I saw a craft on the road. Now, I couldn’t make out any detail because it looked almost misty and very, very bright. And these beings that were about four feet tall walked… were walking towards me. They were very

And they were directing me to get out of the car, which I did. And I was very scared. I wasn’t terrified though, and that distinction needs to be made. I was not terrified. I was scared.

So I got out of the car. They led me down the highway a little bit, and at this point I wasn’t even thinking about my friends, I was just wondering where they were taking me.

And on this embankment on the left… they led me up the embankment where I saw, when I looked up, a larger craft that had two beings standing in this doorway. And they had blond hair — and I mean blond as in snow white hair — and the most brilliant blue, Mediterranean water blue, eyes that you’ve ever seen, and quite incredible. And the beings, the short ones, took me to the craft, and when I got to the doorway I walked onboard the craft. But what was interesting was that just prior to all of this happening I’d had a dream in the back seat of the car. And in this dream that I had, this man and woman told me, they said:
We are coming for you soon. Do not be afraid. We are your friends. We are your family. Do not be afraid.
And then, when I saw these two tall beings, the moment that I laid eyes on them, I said in my mind: What are you doing here? Why can’t you just leave me alone?

And then I walked onboard the craft.

K: And did you have any memories of what happened on the craft at that point?

Miriam: From the moment I walked off that craft, I had very clear memories. And I have had those clear memories for twenty years.

Miriam: Both. Once I was onboard the craft, I remember a great deal of what happened to me. I do not by any means remember the full three hours. I don’t. And I don’t know if I ever will or not, because up to this point… I mean, I have not had hypnosis done to recover memories. So that’s a very important point for me to make to anyone watching, is that these memories have come from conscious memories.

So, in other words, I walked onto the craft, I had this encounter. It took me some time, but I did come to realize that it was a total of three hours. It was very clear math that I did to work this out. So there was three hours of missing time. And I remember quite a bit of the information that they gave me at that time.

There were, ah… There were things that have stayed with me so clearly that even as I’m looking at you I can still see the images in my mind every time I hear about… you know…

K: Can you give us an idea what was conveyed to you at that time?…
***

Miriam: When I was onboard the craft, I was sitting in what I call a “light chair,” and it was… you could look at it just like this. [points to the chair she’s sitting on.] Except, instead of it being a chair, it was made from pure light, so it almost glowed. And I sat in this chair, and I looked across the room, and I had a being on either side of me. And a screen popped up. And the screen was actually quite large. It was probably about this… as large as the chair, and you know. Two or three feet high. And as I looked at the screen, there was information that came across it. And images.

These images would be accompanied by information that was given to me by these beings, either through telepathy or — meaning they would directly speak to me — or it felt like there was just a constant flow of information being sort of placed within my mind.

Now, one of the things that they shared with me was the creation of man. And this is very much related to the Hopi and all of the indigenous people and ourselves.

So, to make this story really short, they explained that they had a hand in creating mankind, but by no means were they God. That they were the helpers of this Earth to insure that… They were overseers, so that they would be here to watch over the Earth, to help man become more than what they currently are.