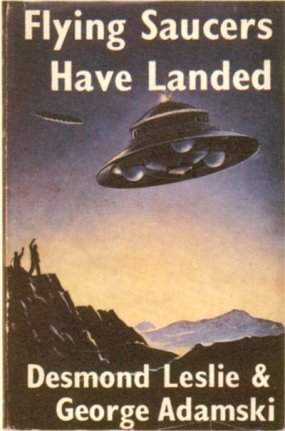 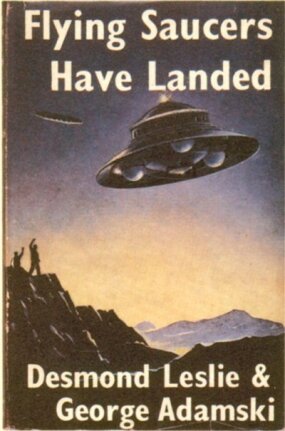 The 50s may not be a time many people today associate with UFOs or extraterrestrials, but looking back, it was the heyday. Flying saucers were all the rage in California, with an annual UFO convention at Giant Rock. During this time, stories about visitations by the so-called “Nordic aliens” captured imaginations. Rather than appearing like little green men, they were humanoids, physically fit, and sometimes tall with light-colored hair and eyes. They looked like they may have come from Scandinavia, not space.

At the location of one of the world’s most gigantic freestanding boulders, a pilot named George Van Tassel opened the Giant Rock Airport Cafe, 40 miles north of Palm Springs, California. Van Tassel claimed that he was visited at the site by a Nordic alien from Venus who woke him at 2:00 in the morning on a full moon in 1952. He wrote a book about the encounter called “Into This World, And Out Again.”

You can hear Van Tassel seriously and casually describe his encounters in the rare video below. Included is his account that he was given the technology to construct a four-story time machine using magnetic fields. An equation, f =1/t, or frequency = 1/time was supposedly the math behind the enormous time machine.

This new technology came from Nordic aliens who arrived on a 36-foot long bell-shaped antigravity scout ship during a second encounter on August 2, 1953. Strangely, he seemed to see nothing particularly extraordinary about the contact. Today, we call those scout ships flying saucers, which Van Tassel says deploy from a carrier ship. The mothership could land for supplies at a base on the Moon, in use for thousands of years.

“What is occurring now has occurred before. There are many records of these ship landing throughout history clear back into Sanskrit,” said Van Tassel.

Van Tassel believed these extraterrestrials were far superior in intellect.

“When you realize we are dealing with a type of man that is almost as far above us in intelligence as we are above the lower animals, there isn’t anything phenomenal in this at all,” he continued.

The aliens spoke perfect English and politely took him aboard a ship, which was unlike any he’d ever seen before as an experienced aviator.

“My name is Solganda and I would be pleased to show you our craft,” the alien told Van Tassel.

From there, Van Tassel slowly rose into the ship by way of an antigravity beam, rising ten feet above the ground. Inside, three other ‘men’ standing 5’6″ tall were waiting. They looked like “white people with a good healthy tan,” as he described. Their age appeared to be youthful in the twenties, but they were over 700 years old in Earth time.

“They’re walking among us on the Earth all the time, and we don’t realize it,” said Van Tassel.

To prove they were not ordinary humans, they could do the seemingly impossible, disappearing and reappearing at will.

“You don’t know unless they want you to know and then they’ll demonstrate something that they can do that we can’t do, that’s humanly impossible for us to do.”

Although Van Tassel alleges he got a tour of the UFO, he says the aliens weren’t keen on sharing much technology with humans. They did, however, share information about electronics, magnetic research, and of course, the alleged time machine.

“… They’re not concerned with giving us too much of their information because we’d only use it in our battle to destroy each other,” he said.

Van Tassel would go on to publish a book about his encounters called, “I Rode a Flying Saucer!” after Solganda came back for another visit. This time he took a ride in the UFO. He would also later claim the Nordic aliens had imparted more technology with him about longevity with an invention called an “Integratron.” However, Van Tassel never perfected the device and passed away of old age.

See the fascinating video from Translate the Universe below:

The same year as Van Tassel’s alleged first encounter, another man, George Adamski claimed to have his own contact with Nordic aliens. Adamski was a self-proclaimed professor in California who previously claimed to have taken photographs of UFOs with a telescope in the late 40s. These photos created a stir when they were published in Fate magazine in July 1951 but were widely considered a crude hoax.

Then on November 20, 1952, Adamski claimed to meet a handsome, blond-haired Venusian named Orthon in Desert Center, California. Orthon came from a spaceship on the ground after telepathically communicating instructions to Adamski. He appeared to be a medium-height humanoid with long blond hair and tanned skin.

Like Van Tassel, Adamski started publishing books about his encounters, including “Inside the Space Ships” in 1955, in which he made outrageous claims about Venusians, Martians, and Saturnians.

“These ‘Space Brothers,’ as Adamski and his disciples called them, proved a long-winded lot, fond of platitudes and full of tedious metaphysical blather.”

Adamski and his followers started sharing their stories about the Venusians at the annual summertime convention at Giant Rock, where Van Tassel and many other contactees drew crowds.

Related: The modern-day Da Vinci who patented a flying saucer in the 40s

The stories of Nordic aliens were numerous, with one particularly stunning account of a Venusian named Valiant Thor who worked for the U.S. government. The six-foot-tall well-spoken man supposedly met with President Dwight Eisenhower and Richard Nixon.

On May 11, 1957, Army Intelligence Corpsman, Wayne Sulo Aho attended the Big Rock convention. Aho claimed he was drawn out into the surrounding Desert by a mysterious force, quite similar to Adamski. Two miles into the bleak landscape, he saw a flying saucer and telepathically communicated with alien beings who warned about a nuclear disaster.

“I’ve been told that the world is still headed toward a nuclear disaster,” said Aho, “and it won’t be the United States or Russia that drops the first bombs. It will be some small nation. But after it starts, the nuclear war will spread throughout the world.”

Aho claimed to have met with government officials to convey the warning, and said they privately related their own stories about witnessing UFOs. He would travel the country in a recreational vehicle lecturing about his experience with his wife and two sons.

The UFO convention at Big Rock served as a platform for all kinds of tales about UFOs and extraterrestrial contact. So the big question remains: Were these tales of Nordic aliens and flying saucers all made up, dramatic stories to tell at the annual Big Rock convention? Or, was the Mojave Desert a place where extraterrestrials who looked like humans visited the contactees in the 50s?

Today, the tradition of meeting to discuss UFOs continues at the world’s largest UFO conference, Contact in the Desert. However, the stories about the contactees, which started it all seem to have diminished. The outlandish lore remains fascinating but is hardly indisputable evidence.

In 2019, interest in UFOs has never been greater but humanity never learned much about the original messages the contactees claimed came from Nordic aliens. We definitely remain a war-like species intent on self-destruction. Little wonder then that aliens, if they exist, have remained well-hidden ever since. See more about the lore of George Adamski in the video below.

Much more about Adamski from etfirstcontact41 below:

Featured image by StockSnap via Pixabay