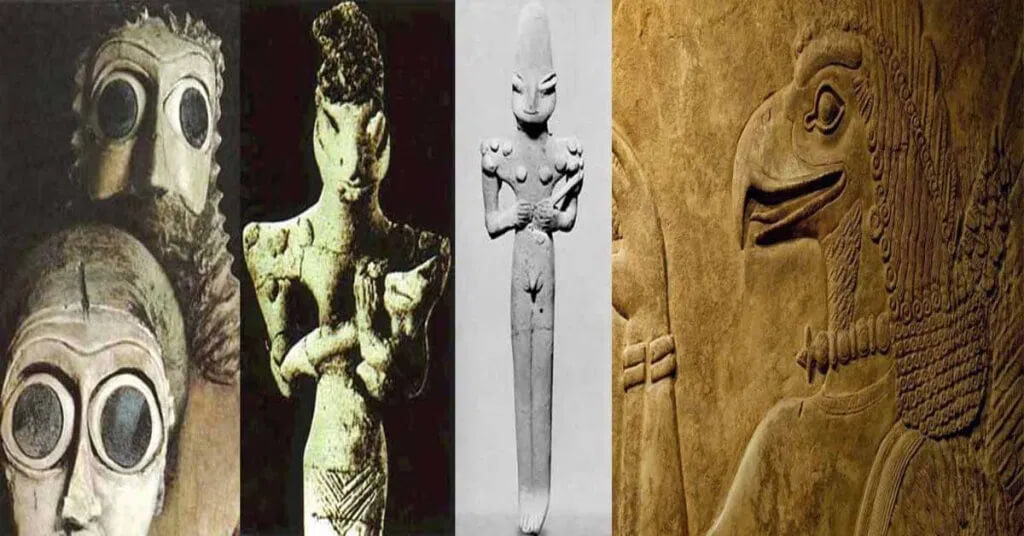 If we believe in the alleged message of the Anunnaki published in the November-December 1958 editions of Flying Saucer Magazine, the ancient Anunnaki did exist on Earth in the distant past.

As per Brinsley Le Poer Trench, the editor of the Flying Saucer Review, the alleged extraterrestrial message appeared for the first time in a 1947 issue of Fanatic Stories written by an author under the pseudonym “Alexander Blade”.

“We are already here, among you. Some of us have always been here, with you, yet apart from, watching, and occasionally guiding you whenever the opportunity arose.”

Interestingly, the otherworldly message appeared only a few months after the Roswell incident took place.

The article which is believed by many to be the evidence of the ancient Anunnaki states:

“We have been confused with the Gods of many world-religions, although we are not gods, but your fellow-creatures, as you will learn directly before many more years have passed. You will find records of our presence in the mysterious symbols of ancient Egypt, where we made ourselves known in order to accomplish certain ends.”

“Our principal symbol appears in the religious art of your present civilization and occupies a position of importance upon the great seal of your country (The United States of America). It has been preserved in certain secret societies founded originally to keep alive the knowledge of our existence and our intentions toward mankind.”

Once the ancient Anunnaki introduced themselves as our fellow-creatures, they moved forward to mention human advancements and ancient civilization, especially ancient Egypt, the place where Anunnaki are believed to be most involved.

We have left you certain landmarks, placed carefully in different parts of the globe, but most prominently in Egypt where we established our headquarters upon the occasion of our last overt, or, as you would say public appearance.

At that time the foundation of your present civilization was ‘laid in the earth’ and the most ancient of your known landmarks established by means that would appear as miraculous to you now as they did to the pre-Egyptians, so many thousands of years ago.”

Back in the 19th century, approximately 22,000 clay tablets were discovered by the archaeologists exploring the ancient ruins of Nineveh.
After the translation, the tablets showed great resemblance to the stories mentioned in the Judeo-Christian Bible.

The stories of the great flood and even Adam and Eve can be found in those tablets which indicates that all these stories have precedence with the ancient Sumerians.
The controversial author Zecharia Sitchin, is a popular name whenever the existence of the Anunnaki on Earth is discussed.

It is believed by many that the Anunnaki are responsible for numerous things that took place in the past.
The message of the Anunnaki continues:

“Your ancestors knew us in those days as preceptors and as friends. Now, through your own efforts, you have almost reached, in your majority, a new step on the long ladder of your liberation.”

“You have been constantly aided by our watchful ‘inspiration’, and hindered only by the difficulties natural to your processes of physical and moral development…”

“Some of you have seen our ‘advanced guard’ already. You have met us often in the streets of your cities, and you have not noticed us.”

You have lately achieved the means of destroying yourselves. Do not be hasty in your self-congratulation. Yours is not the first civilization to have achieved—and used—such means. Yours will not be the first civilization to be offered the means of preventing that destruction and proceeding, in the full glory of its accumulated knowledge, to establish an era of enlightenment upon the earth.”

“[…] you are amazed, and those of you who open your mouths and tell of what you have seen are accounted dupes and fools. Actually, you are prophets, seers in the true sense of the word.”

“One of you says ‘I saw a torpedo-shaped object.’ Others report ‘disc-like objects’, some of you say ‘spherical objects’ or ‘platter-like objects’. You are all reporting correctly and accurately what you saw, and in most cases, you are describing the same sort of vehicle.”

“We pass over hilltops in horizontal flight. You see and report a torpedo-shaped object. We pass over, in formation, flying vertically ‘edge-on’…Or we go over at night, jet-slits glowing, and you see an orange disc.”

As per the Anunnaki, the creators of the human civilization- the ancient Gods of Mesopotamia can only be seen when they want to.

The message of the Anunnaki continues:

“In any event you see us, and in any event, we do not care. If we chose to remain visible, we could do so, easily, and, in fact, we have done so almost without exception for hundreds of years. But you must become accustomed to our shapes in your skies, for one day they will be familiar, friendly, and reassuring sights.”

Learn From Your Mistakes Humans: The Message of The Anunnaki Continues:

“This time, it is to be hoped that the memory of them, passed on to your children and their children, will be clear and precise. That you will not cause them to forget, as your ancestors forgot, the meaning of the diagrams and the instructions we will leave with you.

If you do fail, as other civilizations have failed, we will see your descendants wearing wiring-diagrams for simple machines as amulets, expecting the diagrams to do what their forefathers were taught the completed article would accomplish.

Then their children, forgetting even that much—or little—would preserve the amulet as a general protective device—or as an intellectual curiosity—or perhaps as a religious symbol. Such is the cycle of forgetfulness.”

In 1976, Zecharia Sitchin published his personal translations of the Sumerian texts in his books called “The Earth Chronicles”.
As per his understandings, an alien race called Anunnaki who descended upon Earth to mine gold was described in the clay tablets.

Sitchin proposed in his theory that an alien race came to Earth in order to mine gold and fix their planet called Nibiru.
According to the Ancient Alien theory, the Anunnaki genetically altered primitive mankind and created a labor force which allowed them to mine gold faster.