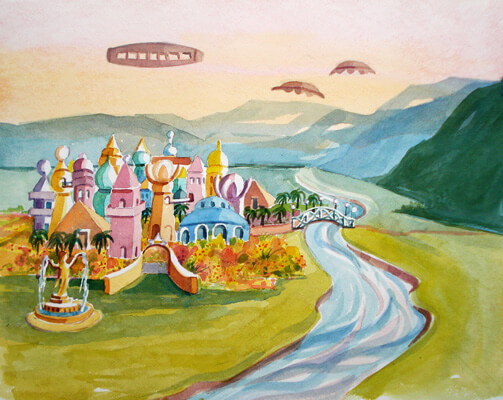 From Nikola Tesla, Valiant Thor, Ralph Lael to Elizabeth Klarer we have multiple stories claiming that Earth has met the inhabitant of Venus. From a scientific point of view, in the distant past, Venus sustained life and in the next billions of years, Earth will also become like it. Among all these strange stories, meet Omnec Onec who claims that she was actually born in Venus in another dimension but later arrived on Earth in a spaceship.

Omnec’s autobiography “From Venus I Came” was published in 1991 by Lt. Colonel and UFO investigator Wendelle C. Stevens. In it, Omnec explained that she had been living in the city of Venus called Teutonia for 210 years before she arrived on Earth in a spaceship with her uncle and took a form of a young girl who had a bus accident and died.

Billy Meier, a popular alien contactee who claimed to have been in regular contact with The Plejarens, worked on the promotion of her book. The most intriguing and exciting part of her story is that before arriving on Earth, she had lived on the astral dimension on Venus which is a beautiful place with crystalline cities.

Omnec described the astral plane as a dimension of lower density that cannot be seen or touched physically. In her book, she wrote that a very long time ago, Venus was a beautiful place as Earth today is. But due to different climatic conditions, it became impossible for the Venusians to live, so with the help of spiritual development, they found themselves cease to exists in the astral plane with no physical contact.

“As I was born on the planet Venus in another dimension and came to your planet as a young child, I was able to retain the knowledge and information that I had gathered as a soul through many incarnations and life times. I can keep this information intact, and what I teach people is actually what I KNOW and not what I’ve read about or what I’ve heard, but what I have experienced through many different life cycles on Earth and in other dimensions.”

According to her, she came to Earth as a spiritual leader to enlighten people, spread peace, and help them to feel a unique experience. She flew to Tibet in 1951, where monks helped her to adjust to Earth’s gravity. Then she moved to Tennessee, United States in 1955 where she took the form of a seven-year-old girl, Sheila Gipson who died in a bus accident, and also she had a karmic connection with her. She was raised by Sheila’s grandmother in Chattanooga, Tennessee.

In her interview with the former Russian MIG pilot and UFO-researcher Marina Popovich in 1993, she said:

“I gathered a few plants and tried to preserve them and I had a ring and they picked me up in a small craft what we call the scoutship and transported me from the surface of Venus we have like a dome over the city and it’s not visible because of the gases by covering the city but you have to know the location our ships have the ability to travel through time from visions because of their vibratory making control it has over the magnetic waves and to create their own gravitational force we left the surface met a huge mothership cigar-shaped ship went into the chamber partnership and then I prepared for my journey to earth from Venus which didn’t take very long maybe 24 hours we came close to the surface and once again I prepared to board a small craft.”

She learned about Earth from the scientists of different planets who had been monitoring life here since when Atlantis and Lemuria used to exist. The meaning of Omnec Onec’s name is “spiritual rebound.” She strongly believes in reincarnation and Karma, that is why she agreed to come on Earth and balance her personal Karma.

Omnec has four children and three grandchildren. She had heart stoke in 2009 and because of it, her body is half-paralyzed.