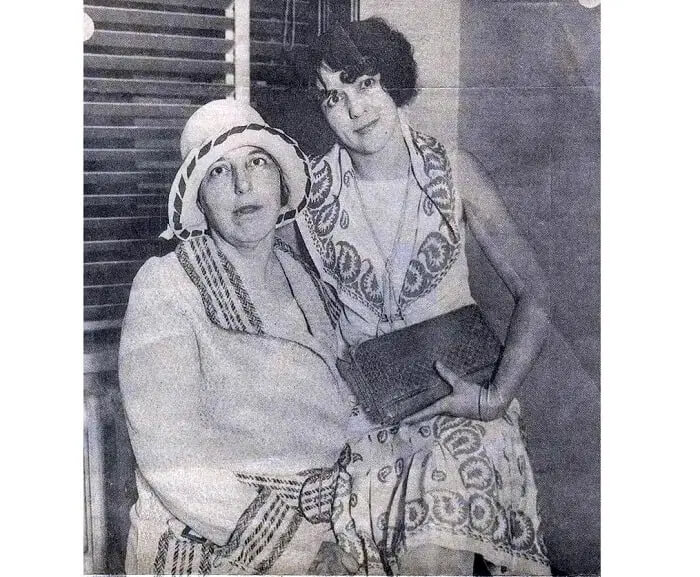 It all began in 1922 when two women, quite normal inhabitants of Los Angeles, California (USA) – May Otis Blackburn and her daughter Ruth Wieland Rizzio announced that they had communicated with the Angels which led to the formation of a cult popularly known as “The Blackburn Cult”

These Angels, according to them, were the biblical archangel Gabriel and the archangel Michael. They not only talked with Blackburn and Rizzio but based on their answers, they allegedly wrote a new “Book of Revelations.”

This book, according to the women, contained the deepest secrets of the Universe, and also talked about the “lost dimensions” that will show the way to the “hidden treasures” and together this will open the Seventh Seal and the End of the World will come.

When this book is finished, Heaven will open into our reality and the Apocalypse will take place, in which only the most worthy will survive. According to Blackburn and Rizzio, this book was called “The Seventh Trumpet of Gabriel” or “The Great Sixth Seal.”

In order to safely go through all these disaster and in the end to find salvation, it was necessary to unite in a group, the founders of which were Blackburn and Rizzio.

The teachings of this cult were a jumble of various ideas as if pulled from various other religions and philosophies. There was Christian science, and the ancient Greek traditions of worshiping the goddess Hecate, and of course a lot of outright paganism.

May Blackburn became the self-appointed queen and high priestess of the cult, calling herself the “Heel of God.” The mention of Eleven in the name of the cult came from Blackburn’s ideas that after the Apocalypse there would be a New World, which would be ruled by eleven Queens.

No matter how nuts and farfetched all this may sound, the Blackburn cult gradually became more and more popular and around Blackburn and her daughter a crowd of fans began to rally, for which every word of the “Queen” was true.

These members have begun performing various rituals and making strange pilgrimages to “significant” places, such as the Mojave Desert, where there is a deep pit called the Devil’s Hole. Rumor has it that it is bottomless and leads directly to the inner world underground.

With too many people, the cult expanded into a vast complex in the Santa Susana area in the Symi Valley in Ventura County, California. A temple with a golden throne room was built there.

There were also many horrid rumors about this place, the most frightening of which were those that reported that a huge number of members of the cult simply disappear without a trace.

In fact, once even May Blackburn’s own husband, Samuel Rizzio, simply disappeared after a quarrel between them and he hit her. Nobody else heard of him.

It was speculated that he was poisoned and secretly buried somewhere, but no evidence of this was found, as was his body. It was also reported that four other famous members of the cult also once simply disappeared – Francis Turner, Harlene Sartoris, Katherine Boltz, and Addle McGuffin.

Once bedridden, a member of the cult, whose name has not survived in history, was placed “for treatment” inside a large brick building, but two days later he died suddenly for unknown reasons.

But the strangest thing about it all was the story of a girl named Willa Rhodes. She, too, was a member of the cult and also suddenly disappeared. And then her body was found under very odd circumstances.

Willa was only 16 years old and was listed as one of the Temple’s priestess assistants. She disappeared in 1925 and for several years no one knew what happened to her. Fortunately, the local police did not abandon the case and continued to search for evidence of her missing. In 1929, they decided to search the home of Willa’s adoptive parents and suddenly found the well-preserved remains of her body under the floorboards.

The body was found in an artificially created burial chamber dug under the house, placed in a specially designed airtight cedar coffin, and covered with spices and salt. And the coffin was surrounded by the semi-mutilated bodies of seven dogs.

It was a big scandal and the cult immediately came under even more scrutiny from the police. During interrogation by the police, Willa’s adoptive parents stated that their daughter had simply died from an infection caused by an abscess of a tooth, after which they buried her in such a strange way.

However, when they began to interrogate May Blackburn, she told the police that, in fact, Willa was not at all dead, but simply lay in stasis (hibernation), waiting for her righteous resurrection to take her place on the throne as “Princess of Heaven” after the incident. Apocalypse.

According to Blackburn, the dead dogs represented the “Seven Notes of Gabriel’s Trumpet,” and she insisted that Willa was not actually dead.

The police disagreed, but although they suspected that the girl was killed during the cult ritual, no evidence was found, and neither the two adoptive parents nor Blackburn was charged in connection with Willa Rhoads’ death.

Indeed, the police did not manage to connect the disappearance and death of Willa with the Blackburn cult, but there was another reason for the downfall of this cult. In 1929, that is, the same year that Will Rhodes was discovered, one of the cult members issued a statement that Mae Blackburn had deceived him.

The allegations came from a wealthy oil tycoon named Clifford R. Babney, who claimed to have given over $ 50,000 in cash and Blackburn assets, including the land on which their hideout was located, in exchange for being shown a book written by angels. But Blackburn never showed it to him.

This was followed by many other accusations from various members of the cult, which claimed that they were regularly forced to give large monetary “donations” to the cult, amounting to approximately $ 200,000, which would be more than $ 3 million in today’s money.

May Blackburn was arrested and convicted on eight counts of grand theft in 1931, but the California Supreme Court later dropped the charges due to lack of evidence that she actually took the money maliciously and the trial was incomprehensible. for various rumors and allegations of missing persons and mysterious deaths.

Blackburn and her daughter managed to escape legal action, but this greatly influenced the members of the cult and they quickly began to leave. The cult quickly faded and the promised book never saw the light of day.

In 1936, May Blackburn published a new book, The Origin of God, in an attempt to revive the cult, but it was not successful. May Blackbourne passed away in 1951.

Since then, the legacy of this group has remained a mystery, and there are no clear answers as to what happened to any of its parts, including how and why people disappeared. Now it remains just a strange tale of a cult lurking in the shadows, and its true intentions and the extent of its gruesome operations are still unknown.