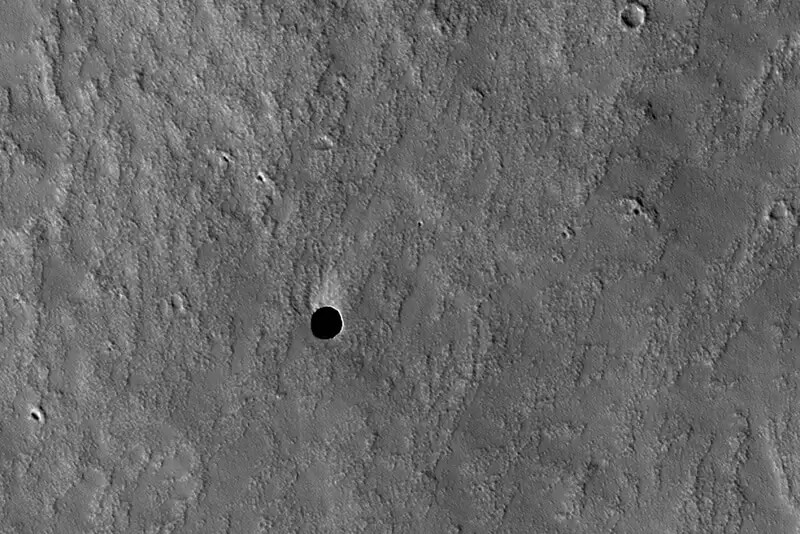 Most of Mars is extremely inhospitable to life, but there may be a workaround. The areas near the entrances to caves should, in theory, be shielded from some of the harmful radiation that bombards the planet’s surface.

Because Mars doesn’t have a global magnetic field or a thick atmosphere like Earth, its surface is exposed to dangerous ultraviolet (UV) radiation and ionising radiation from space, which would present a problem for native life and human explorers alike. Any living thing on the Martian surface would be exposed to doses of radiation that are 900 times higher on average than what it would experience on Earth.

However, images of the planet from orbit have shown what appear to be entrances to caves, and the insides of these caverns could be protected from those harmful rays. Daniel Viúdez-Moreiras at Spain’s National Institute for Aerospace Technology has now calculated how much UV radiation would still make it into different types of caves at various locations on Mars.

He found that in many cases the levels of UV radiation inside the caves would be around 2 per cent of the levels on the surface. Those radiation levels are low enough to be relatively safe, but still high enough to sustain organisms that require light to produce energy via photosynthesis.

It isn’t clear whether ionising radiation – which is potentially even more dangerous than UV – would be blocked out in the same way, but it is likely, according to Viúdez-Moreiras. “Ionising radiation doesn’t present exactly the same behavior as UV radiation,” he says. “However, it is expected that ionising radiation will also be strongly attenuated in pit craters and cave skylights.”

The consequences of this are twofold: caves may be safe locations for human explorers to hide from the extreme conditions at the Martian surface, and they may also be some of the best places to search for signs of life on the Red Planet. No lander or rover has ever visited a cave on Mars, but doing so would be the best way to figure out whether they really are habitable, says Viúdez-Moreiras.