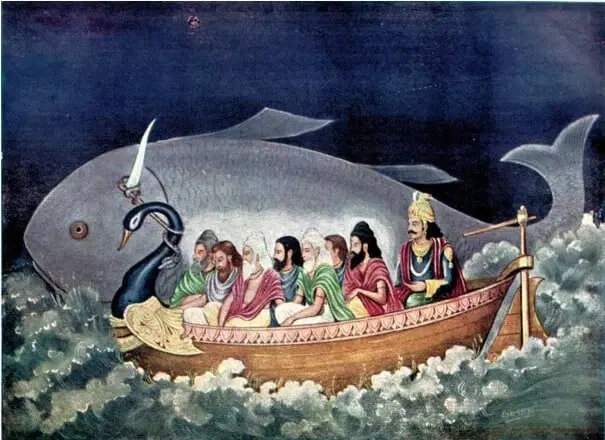 From the books about ancient history, we know that people used to worship many gods, but have you heard about demi-gods known as “civilizers”? Some researchers have long been discussing “civilizers” who transmitted knowledge, technology, and culture to people. In many ancient cultures such as Babylonia, Sumeria, China, Ancient Greece, and India, these demi-gods or mysterious creatures are known as “seven wise men” or “seven sages.”

In the Sumerian texts, the seven sages were called Abgal (or Apkallu in Akkadian). According to a legend, these sages were created by the wisdom god Enki and came to people from the world ocean Abzu, which is reflected in their name (ab=water, gal=big, lu=man). Abgal is mentioned in the “Uruk list of kings and sages” (165 BC), “Babylon” by Berossus, “poem about Erra (Akkadian plague god)” and in tablets with incantations.

The sages Apkallu served as advisers to the Sumerian kings who ruled before the great flood and were also priests of the god Enki. But, apparently, they were not just disinterested helpers and benefactors but were assigned by the gods to the kings in order to perform control and supervisory function. According to some myths, these sages’ appearance was fish-like but after the flood, it changed. Now, they came out to be half humans and half superhuman creatures.

The sages founded the first seven Sumerian cities, and were also the divine powers called “Me” or “tablet of destinies.” The Sumerian word “me” means mysterious and powerful divine forces, knowledge, technologies, concepts. The Sumerians believed that some “me” were transmitted to people by the gods through their intermediaries, the seven sages Apkallu, who also taught people the crafts and arts received from Enki, who, in turn, received “me” from the god Enlil.

Obviously, the presence of some mythical creatures in the Sumerian text is not enough to prove this legend. However, there are similar legends of the seven sages in the ancient Indian Vedic text. In Sanskrit, the “seven sages” are called Saptarishis

. The Rig Veda (sacred canonical texts of Hinduism) narrates about seven great rishis (“great yogis” or “sages”). They are mentioned along with the gods. They have no definite names yet. In the Satapatha Brahmana, they are already individualized and given names. Seven Rishis were identified with the seven stars of the Big Dipper.

The seven spiritual sons of Brahma in Indian mythology are called Manasputra (in Sanskrit “willingly accepted as an own son” or “equivalent to pan son”). They are considered the creators of the universe and the progenitors of all living today.

These sages were so important that during the Great Flood, the gods tell them to be saved first. In Matsya Purana (oldest preserved Sanskrit literature), it is written how Brahma, in the form of a fish, instructed Manu to take seven holy sages and plant seeds into a boat to save them from the Flood.

Ancient Iranians have common roots with the Vedic Indian, and here seven sages are known as Amesha Spentas or Holy Immortals. In Zoroastrianism, the Amesha Spentas are the six highest spirits of the kingdom of light, patrons of good: from them comes the creation of all visible, good things, and according to their decision, everything that is perfect and good is realized and preserved. Although there are six Amesha Spentas themselves, together with the god Ahuramazda (‘Lord’ or ‘Spirit’), Amesha-Spenta makes up the “holy seven”. Besides, in the later Middle Persian religion, each of Amesha-Spenta was credited with the patronage of a certain area in the creation of life.

In the Orthodox Christian tradition, the names of seven archangels are Michael, Gabriel, Raphael, Uriel, Yehudiel, Selaphiel, Barachiel. In Islam, the angels’ names are borrowed from the Hebrew word “Malak.”