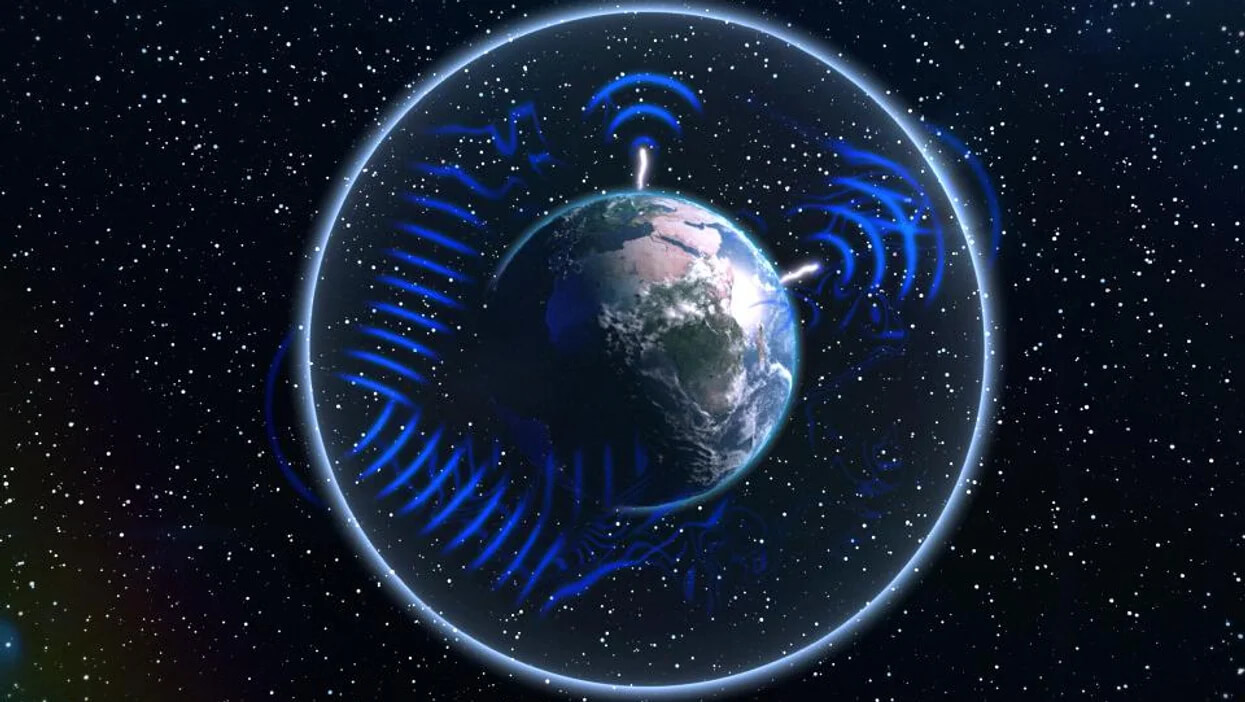 NASA Video
As lightning flashes, it creates low frequency waves that circle Earth, a phenomenon known as Schumann resonance. Much of the energy from the waves is trapped between the ground and the ionosphere layer in Earth’s atmosphere â but it has now been shown that some of the energy leaks out.

Some scientists believe the lightning-produced frequencies may be connected to our brain waves, meditation, and hypnosis.

Flashes of lightning that strike around the earth about 50 times every second create low frequency electromagnetic waves that encompass the planet. These waves, dubbed Schumann Resonances, may have an affect on human behavior, think some scientists.

Kept up by the 2,000 or so thunderstorms that (according to NASA) batter our planet every moment, the Schumann Resonances can be found in the waves that go up to about 60 miles above in the lower ionosphere part of our atmosphere. They stay up there thanks to electric conductivity in the ionosphere that features charged ions, separated from neutral gas atoms in the area by solar radiation, as explains Interesting Engineering. This allows the ionosphere to capture electromagnetic waves.

The Schumann Resonances encircle the Earth, repeating the beat which has been used to study the planet’s electric environment, weather, and seasons. Flowing around our planet, the waves’ crests and troughs align in resonance to amplify the initial signal.

The waves were named after Winfried Otto Schumann, in honor of his seminal work on global resonances in mid-1950s. First measured in the early 1960s, the very low-frequency waves (with the base at 7.83 Hertz) oscillate between greater and lower energy. The frequency 7.83 Hz has been called the Earth’s “heartbeat.” Progressively weaker harmonics have been measured at around 14.3, 20.8, 27.3, and 33.8 Hz.

The resonances fluctuate with variations in the ionosphere, with the intensity of solar radiation playing a major part. At night, for example, that part of the ionosphere becomes thinner.

The world’s lighting hotspots in Asia, Africa, and South America, whose storms are seasonal and affected by whether its night or day, also influence the strength of the resonance.

These waves have also been studied for their impact on humans. A 2006 study found that the frequencies may be related to different kinds of brain waves. The researchers described “real time coherence between variations in the Schumann and brain activity spectra within the 6–16 Hz band.” Authors of a 2016 paper from the Behavioral Neuroscience Laboratory of Canada’s Laurentian University discovered that 238 measurements from 184 individuals over a 3.5 year period “demonstrated unexpected similarities in the spectral patterns and strengths of electromagnetic fields generated by the human brain and the earth-ionospheric cavity.”

The Schumann Resonance of 7.83 Hz has also been linked by some to hypnosis, meditation, and even human growth hormones but there’s less rigorous scientific evidence of those connections at this point.

Can our bodies truly be affected by electromagnetic frequencies generated by incessant lighting strikes? Certainly some of the speculation ventures into new age science. Some believe a spike in the resonance can influence people and animals, while a reversal may also be possible, where human consciousness can both be impacted by and itself impact the Schumann Resonances. By this logic, a sudden source of global stress that produces worldwide tension would be able to change the resonances. Some have even blamed the stress caused by the Schumann Resonances that resulted from the ancient Chicxulub impact event, when a huge asteroid struck Mexico, for the demise of the dinosaurs.

The frequencies in the Schumann Resonance.

While the imaginative effects of the Schumann Resonances are still up for much more scientific study, the fascination with this unique natural phenomenon continues.