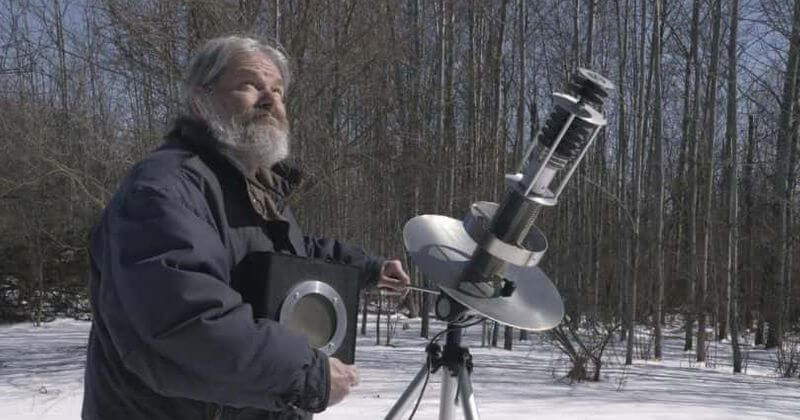 Netflix
Aug 6, 2020
John Shepherd spent 30 years trying to contact extraterrestrials by broadcasting music millions of miles into space. After giving up the search he makes a different connection here on Earth.

Since the onset of the coronavirus pandemic, multiple countries have enforced lock down measures to flatten the curve. However, even after lock down measures have been lifted — although the virus has not gone away — many have chosen to remain in isolation to be safe. It is during times like these the value of human connection is recognized. While we have been spending time away from our friends and loved ones, many of us have resorted to pet projects like baking sourdough bread or growing plants — but most of us feel like something is missing.

Netflix’s latest short documentary film, ‘John Was Trying to Contact Aliens’, was written, directed and edited by British filmmaker Matthew Killip. The subject of the documentary is John Shepherd, who spent 30 years broadcasting experimental music millions of miles into space from his grandparents’ home in rural Michigan, which he transformed into an incredible laboratory. The short film examines Shepherd’s project, Project STRAT, for Special Telemetry Research And Tracking and also examines the human behind this initiative. ‘John Was Trying To Contact Aliens’ premiered at the Sundance Film Festival 2020, where it was named the winner of the ‘Short Film Jury Award: Non-Fiction’, and was nominated in the ‘Short Film Grand Jury Prize – Best Short Film’ category.

John Shepherd grew up in rural Michigan with his grandparents, having been abandoned at a young age. He grew up as a fan of science fiction shows like ‘The Outer Zone’ and ‘Twilight Zone’. In 1972, when he was 21, inspired by his love for sci-fi and a past UFO sighting, Shepherd began to put his interest into the designing and building of large scale pieces of electronic equipment so that he could conduct his own search for aliens.

Shepherd’s grandparents were fully supportive of his endeavor and the self-taught electronics engineer founded Project STRAT, slowly converting more and more of their home into an alien observation laboratory with the aim of obtaining hard scientific evidence of the existence of alien species — with him and his grandmother even pooling in money to expand their house to fit in more equipment. To do so, Shepherd would often broadcast different styles of music from different parts of the world, having his own radio station in case an alien being was to pass by. The biggest equipment in Shepherd’s laboratory was a two-story-high, 60,000-volt deep-space radio transmitter that could broadcast the music program’s signal into deep space. Using this transmitter, Shepherd broadcasted music daily into space.

Unfortunately, after nearly 30 years of unanswered transmissions, Shepherd was forced to cease his daily broadcasts due to diminishing funding. His equipment was dismantled and moved to a less expensive location, where the project slowly wound down over the next few years.

You may be wondering, did Shepherd lead a solitary life? This is one of the questions the Netflix short documentary aims to answer and what the documentary presents will satisfy viewers. What motivates a man to spend such a long time dedicated to one single purpose, with no signs of success? Shepherd, perhaps, is a special human being — one who can teach us plenty of lessons.

‘John Was Trying to Contact Aliens’ will be available to stream on Netflix on Thursday, August 20, from 12 am PST.