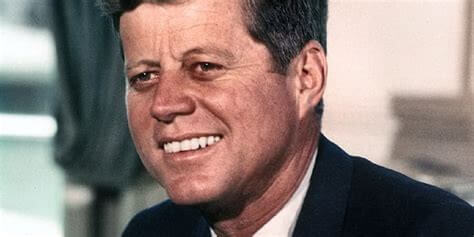 A few days before his mysterious death, the 35th US president John F. Kennedy demanded that the CIA provide him with a UFO dossier. From another archival note by John Kennedy, it became known that he wanted to offer the USSR a joint program for space exploration.

Almost half a century after the death of John F. Kennedy, sensational details were revealed regarding his latest orders. It turned out that just 10 days before his death, the 35th president of the United States requested top-secret information about flying ships from special services.

According to the Daily Mail, Kennedy sent two requests: one to the CIA, the other one to NASA. The circulars had been useless in the archives of these departments for many years, but in the end, on the request made by author William Lester under the Freedom of Information Act, the CIA had to release the documents to him.

Author William Lester said the CIA released the documents to him under the Freedom of Information Act after he made a request while researching for his new book ‘A Celebration of Freedom: JFK and the New Frontier.’

While working on a new book ‘A Celebration of Freedom: JFK and the New Frontier,’ the writer got the opportunity to familiarize himself with the contents of archival materials. Studying those documents, the author came across two sensations at once.

In a letter dated November 12, 1963, to the Director of the CIA, John F. Kennedy demanded a detailed report on the secret materials of the department devoted to UFOs and other paranormal phenomena. In another one, that was addressed to the administration of the National Space Agency (NASA), the president expressed a desire to cooperate with the Soviet Union in the field of space research and even join forces in space exploration.

Of course, there could be no talk of any opening of the Iron Curtain: after the Caribbean crisis, relations between the two nuclear powers became extremely heated. However, according to Lester, the coincidence of the two documents in time is far from accidental. The fact is that flying ships had repeatedly been seen over the territory of the Soviet Union. Kennedy rightly feared that the USSR might regard the appearance of unidentified objects in the sky above its territory as military aggression.

“I think this is one of the reasons why he wanted to get his hands on this information and get it away from the jurisdiction of NASA so he could say to the Soviets,” sais Lester.

The publicized documents once again convinced ufologists that the president was killed because of his interest in UFOs. According to paranormal researchers, behind the tragic death of Kennedy were people who were not interested in the head of state who was wildly popular among ordinary Americans, to learn the truth about UFOs.

Supporters of the conspiracy theory in connection with newly discovered circumstances recall other documents: the sensational “burned memo.” In 1999, ufologist Timothy Cooper was given a certain document with charred fields. The papers contained internal correspondence of senior CIA officers. In particular, the director of intelligence services drew the addressee’s attention to the fact that ‘Lancer’(Kennedy’s Secret Service code name) was too actively making inquiries, and his curiosity needed to be stopped.

It was reported that this top-secret file, subject to destruction, was saved from the fire by a CIA officer who served in the department from 1960 to 1974. The authenticity of the document was repeatedly questioned, and its last owner even turned to forensic experts for a professional opinion. However, the examination results have not yet been made public.