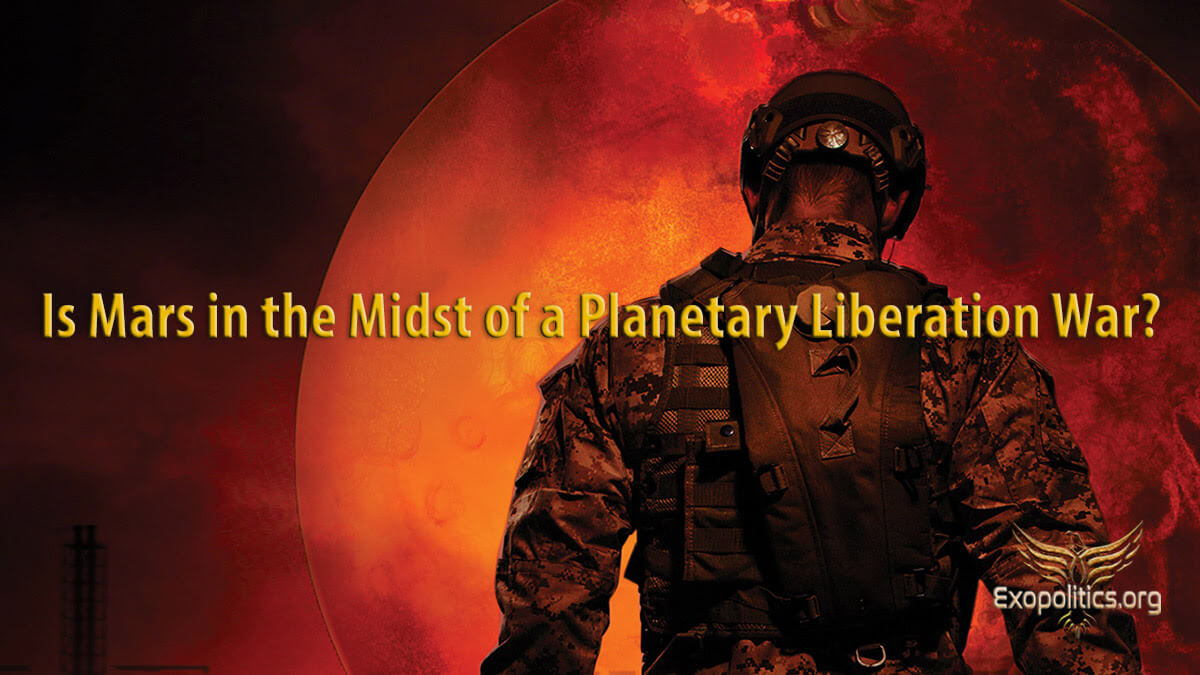 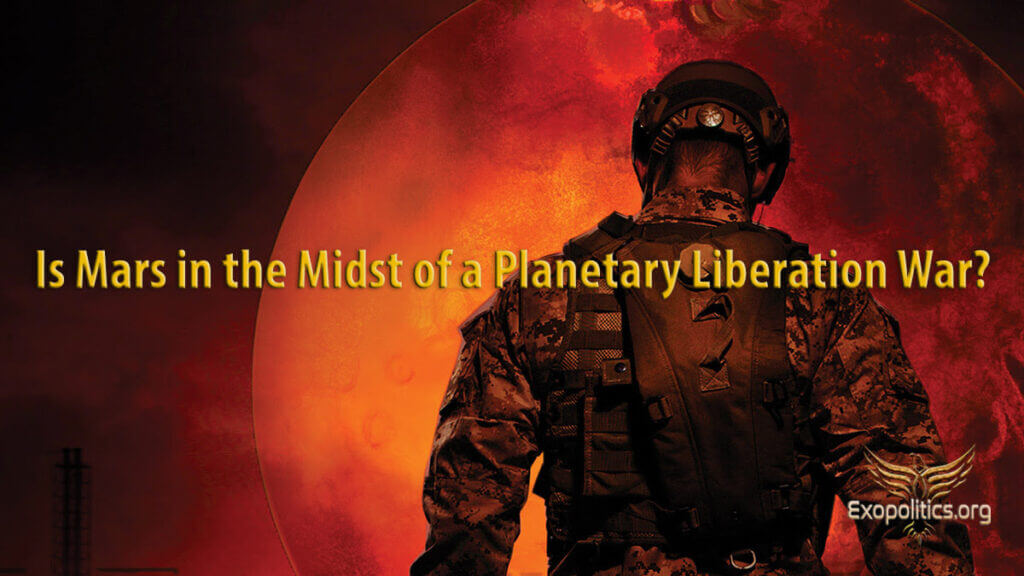 On April 30, Elena Danaan, a former professional archeologist whose claims of contact with extraterrestrials from the Galactic Federation of Worlds have gained widespread attention, delivered a bombshell report about an ongoing series of military raids on Mars that aim to destroy the bases of a rival extraterrestrial alliance: the Draconian Empire and the Orion Collective. These extraterrestrial bases were created to suppress the indigenous Mars population; manage the operations of human colonists associated with a German breakaway group called the Dark Fleet (aka Nacht Waffen); and oversee major Earth corporations that have relocated to Mars.

According to Elena, the Galactic Federation has begun helping liberate Mars from the influence of the Draconian’s and Orion’s by supporting indigenous Martians with supplies, weapons, and tactical information. The Federation has also been assisting a local resistance movement that exists in the human colonies that have been established on Mars.

While providing logistical and tactical support to local resistance forces, the Galactic Federation has been using its advanced technologies to incapacitate Reptilian and Orion extraterrestrials, thereby enabling the Martian resistance to strike against their extraterrestrial overlords and human minions.

In order to better understand Elena’s report, I thought it would be helpful to provide a brief background on Mars and its recent history in terms of covert human colonization and historic resistance by an indigenous Martian population.

The colonization of Mars began in the 1950s when the Draconian and Orion Alliance helped the breakaway German colony that had established bases in Antarctica and the Moon establish the first German bases on Mars, using advanced Haunebu flying saucer craft that initially made up the Dark Fleet.

As a result of agreements between the Eisenhower admiexnistration and the German Antarctica Colony (aka Fourth Reich), the Dark Fleet’s bases on Mars were significantly expanded. Most importantly, the US military provided the Dark Fleet with nuclear weapons that were used against the indigenous Martian population comprising local Reptilians, Insectoids, and other less evolved species that resisted the German colonial expansion and the Draconian and Orion incursions.

With the famous brain drain of the 1960s and 1970s, launched under the cover of the US Apollo Program, the Dark Fleet presence on Mars grew substantially. Millions of people–many of whom were taken from Earth under false pretenses—expanded the German colonies and created new ones in conjunction with major Earth corporations.

These new corporate-run colonies have been called the Interplanetary Corporate Conglomerate and they are run by a ‘superboard’ comprising retired or serving CEOs from major corporations. The relocation program to Mars has apparently been greatly accelerated over the last few months as the Deep State is on the verge of a major collapse on Earth. This has led to a major exodus by compromised officials, as discussed in my previous article commenting on Elena’s information.

With the help of the Draconian and Orion Alliance, the Mars colonies became so technologically advanced that they eventually were trading with up to 900 extraterrestrial civilizations. The Mars colonies were equipping mercenary forces recruited from all major countries on Earth to join the Dark Fleet for distinct periods of service. The infusion of personnel, equipment, and resources enabled the Dark Fleet to expand its operations significantly.

Soon the Dark Fleet had powerful fleets of spacecraft with well-armed troops that could fight alongside, or on behalf of, Reptilian and Orion extraterrestrials in interstellar wars of conquest. This meant that the bulk of the Dark Fleet’s operational forces, at any one time, would be located outside of our solar system. This brief background provides the necessary context to better understand Elena’s stunning report.

What follows is my transcript of her report which was delivered verbally and is available on YouTube. Elena’s report begins:

April 30, 2021, the date of the situation [report] on Mars given by Commander Thor Han Eredyon from the Galactic Federation of Worlds. Raids from the Galactic Federation are continuing by a series of Mars raids on the Reptilian facilities. The Martian resistance has been armed and enforced and helped by the Federation and they are fighting the Reptilian occupants and all their allies, and in their allies, there is also an outpost for the Dark Fleet in Mars as well, but not only, there are earth militaries there belonging to other corporations. There is a lot of corporations on Mars that sought refuge there and that had moved, relocated recently because it was starting to smell bad on earth. The alliance was starting to win over them by all their work in the DUMBs (the military’s underground). So now what’s happening on Mars, still attacks from the Galactic Federation. The Ciakahrrs are totally pissed off.

Elena is here pointing out that the Galactic Federation is helping the Martian resistance, comprising humans, local Reptilians, and other indigenous groups, against the Draco Reptilians (led by the Ciakahrrs) their Orion partners, and the Dark Fleet. It’s important to keep in mind here that there are two Reptilian groups involved in the fighting—on both sides of the conflict, just as humans are fighting on both sides.

The thing is that the Federation is working at isolating and then treading piece by piece [in battle strategy]. They are not, the Galaxy Federation is not able to face in full combat, complete, all their fleet face-to-face with the Ciakahrr Empire and Orion group. They’re not powerful enough. So what they do is use strategy.

Importantly, Elena is here pointing out that as far as the overall number of space battle groups and personnel are concerned, the Draconian and Orion Alliance are vastly superior, thereby forcing the Galactic Federation to use stealth and covert operations to achieve their goals. This is well illustrated by the Federation’s strategy of assisting local Mars resistance groups and incapacitating Draconian and Orion personnel through various means.

Startling corroboration for Elena’s information about the respective sizes of the Federation and their Draconian/Orion opponents comes from a recent remote viewing session by the Farsight Institute. In the sessions, the remote viewers observed that the Galactic Federation of Worlds is no match, numerically speaking, with their Draco Reptilian and Orion opponents. Stealth and covert operations are thereby the mainstays of how the Federation deals with a hostile planetary situation such as that on Earth and Mars.

Elena went on to say:

I am not always authorized to tell you what I know from Thor Han, but this I can tell. They have forced all the elites and the heads of the Terran bad military to leave the planet, not to declare war on the planet, you know, and damage a lot of things and kill civilians. They didn’t want that, so the plan was going well, and all the dark elites were just coming at the surface, you know, and then most of them have relocated on Mars. The heads of corporations and also the corporations that own the satellites in orbit of Earth, the harmful satellites, it was to be activated to work with the [micro]chipping of the population, even goes beyond that but not talking about that here.

Here Elena is reporting on the exodus to Mars due to the Galactic Federation neutralizing all attempts at fostering a US civil war, major false flag events, and a Third World War. This means that the Deep State agenda on Earth is collapsing, and elites don’t want to remain here to face justice for their many crimes.