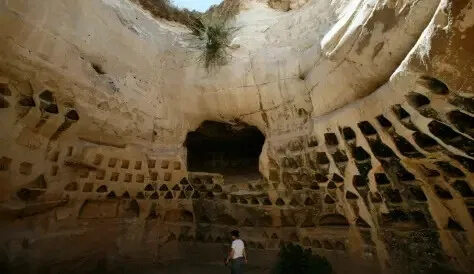 With the passage of time, scientists and researchers have been stumbling across numerous discoveries that challenge all our beliefs and knowledge regarding the age of human civilization, how advance was the ancient civilization and who created the enigmatic massive buildings in the distant past?
One such discovery is the Jernokleev site- The question is, Is This Site Really A Million Old Man-Made Advanced Underground Complex?
And if yes, then Who erected this complex and How?

It is believed by most of the researchers around the world that human civilization has been existing for around 12,000 years on our planet now, however, this might be untrue as there are countless discoveries that point towards a much different history.
Numerous findings ranging from temples, structures, and artifacts act as a piece of evidence which suggest that an advanced civilization inhabited Earth in the distant past.
However, many of these incredible findings have been considered impossible due to the fact that they alter our written history in every possible way.

However, modern thinkers and researchers have begun to take a look into our history with different perceptions.
Among them is Dr. Alexander Koltypin, a geologist and director of the Natural Science Research Center at Moscow’s International Independent University of Ecology and Politology.

Dr. Alexander Koltypin has conducted thorough studies on ancient underground structures across the Mediterranean and identified similarities that lead him to believe the sites were once connected.
Interestingly, the geological characteristics of the site such as the weathering of the structures, their material composition, and historic changes in the region, lead him to believe they were built by an advanced civilization hundreds of thousands or millions of years ago.

Dr. Koltypin supports his argument by stating the fact that the mainstream archeologists who work in the region, are used to date sites by looking at the settlements located on them or in their vicinity, however, some of these settlements were created upon much older prehistoric structures.

“When we examined the constructions … none of us never for a moment had a doubt that they are much older than the ruins of the Canaanite, Philistine, Hebraic, Roman, Byzantine, and other cities and settlements that are placed on it and around.”

During this expedition, Dr. Koltypin climbed a hill about 1,300 feet high near the Hurvat Burgin ruins in Adullam Grove Nature Reserve, central Israel and he was able to accurately record the features present in different ancient sites, something that allowed him to compare afterward, their incredible similarities and details which tell an incredible alternative history, one that has been firmly rejected by mainstream scholars.
While observing over the site, he recalled a similar feeling, almost a Deja vu, from when he had climbed to the top of the rock city Cavusin in Turkey.

“I was personally convinced once again … that all these rectangular indentations, man-made underground structures, and scattered debris of megaliths were one underground-terrestrial megalithic complex which was opened by erosion to a depth of several hundred meters.”

Jernokleev Site- Formation Of Mountains Due To Erosion

In his research, he also argued that not all the parts of the Jernokleev site are located underground.
There are certain parts that are located high above the ground such as the incredibly rocky towns of Cappadocia in modern-day Turkey.
It is believed by him that these deposits appeared after erosion of about a few hundred meters.

“On the basis of this, we can conclude that the underground cities of Cappadocia (including Tatlarin rock city) intended for the accommodation of the ordinary population and the rock city of Cavusin (or its part) was the residence of the kings of the underground. Though almost nothing is known about subterranean, nevertheless we can assume that the people who built the underground cities (if they even were men) were sun-worshipers professed religion of sun gods (harmony and life by the Divine principles – nature laws). After many thousand or million years, this religion had become a basis Christian religion.”

“According to my estimates, such depth of erosion … hardly could be formed in less time than 500,000 to 1 million years,”

Some parts may also be found under the Mediterranean Sea, as is indicated by structures along the coast.

According to his estimates, there is evidence to support that the composition of building material found on a site in Antalya Turkey, referred to by Dr. Koltypin as the “Jernokleev site,” are up to One Million years old, even though mainstream scholars refuse to accept that age, proposing that the site dates back to the Middle Ages.

Dr. Koltypin further adds that as a result of Earth’s crust moving throughout the centuries, parts of the underground complex were plunged into the sea.

According to him, megalithic rocks weighing tens of tons could be directly related to underground complexes in the distant past.

“This circumstance gave me a reason to call the underground structures and geographically related ruins of cyclopean walls and buildings as a single underground-terrestrial megalithic complex.”

With the reference to the technological capabilities of the ancient civilization, Dr. Aleaxander specifically mentioned that the perfectly fitted stones without the use of cement and formation of arches, gates seem beyond the capabilities of a workman with basic tools.

Adding to the mystery of Jernokleev sites and other related sites, Dr. Koltypin notes that structures built on top of, or near sites by the Romans or other civilizations are completely primitive.
He also suggests that the enigmatic markings that extend along the Phrygian Valley, in central Turkey, were made by an intelligent race that existed somewhat between 12 to 14 million years ago.