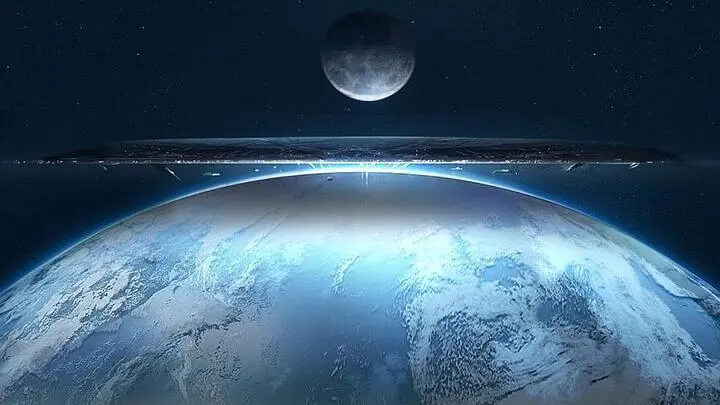 The ideal ‘Earth 2.0’ will be an Earth-sized, Earth-mass planet at a similar Earth-Sun distance from… [+]

All across the Universe, trillions of galaxies can be seen, with each one typically containing billions and billions of stars. Here on Earth, life not only arose, thrived, and became complex and differentiated, but intelligent, technologically advanced, and even space faring, to a degree. But these last advances — taking us into the space and information ages — are extremely recent, and space is enormous. If an alien civilization saw us, would we even appear interesting from their perspective? Tayte Taliaferro wants to know, asking:

I was thinking about the projection of light through space. My curtain was open and I saw the stars and something from a book popped into my head. It had said that the stars we see are basically reruns. The light is from so long ago, we don’t even know if the star still exists or not.
[…] Whatever signals we send out, or changes in our planet that might be observable to prove intelligent life lives here, would take billions of years to reach anything alive and capable of responding! What do you think?

I think these are great questions to ponder, and that science has an awful lot to say about what aliens would see by looking at Earth.

In our Solar System, Earth is a rocky planet with a thin atmosphere that orbits our Sun in what we call the habitable zone: at a distance where liquid water, given an Earth-like atmosphere, can stably exist on the planet’s surface. Mars and Venus may potentially lie in that region of space as well, but Venus is presently too hot and Mars is too cold (and with too thin of an atmosphere) for Earth-like life to thrive there.

At present, our two most prolific methods for finding planets outside of the Solar System are:

If a sufficiently advanced alien civilization were examining Earth from a great distance, and we happened to be at the right orientation for our world to transit across the face of the Sun from their perspective, they’d have extraordinary reasons to be hopeful about finding out our world was inhabited.

It’s true: light can only travel at some finite speed (the speed of light), meaning that even the nearest stars are only now receiving signals from our planet that were emitted years or decades ago. More distant stars within our galaxy see Earth as it was centuries or millennia ago, while observers in distant galaxies see us as we were millions or even billions of years ago. Still, signatures that our planet is inhabited could be found from even a few billion light-years away, as aliens could take a spectrum of Earth’s atmosphere whenever a transit occurred. 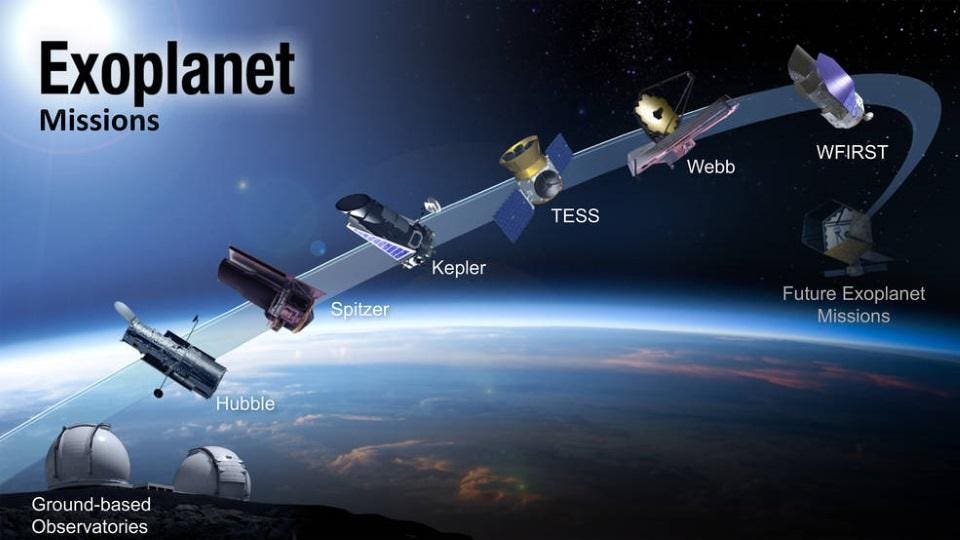 This is an illustration of the different elements in NASA’s exoplanet program, including…

The absorbed light will excite the atoms or molecules they collide with, which can result in either an absorption or emission feature showing up in the atmospheric spectrum. We’ve already used this technique to discover atoms like hydrogen and helium — and even molecules like water — in the atmospheres of planets beyond our own Solar System. 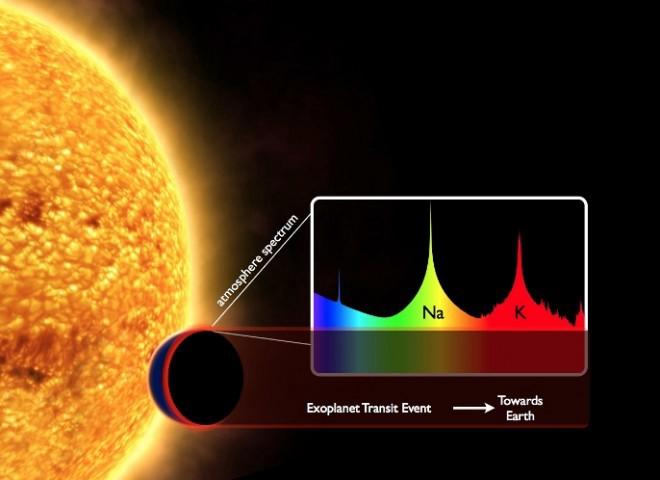 When a planet transits in front of its parent star, some of the light is not only blocked, but if an…

If an alien civilization were capable of observing our planet at any point over the past 2-to-2.5 billion years, they’d discover a planet whose atmosphere was made mostly out of nitrogen gas, but with a very large-and-substantial fraction of molecular oxygen as well. Water vapor and argon gas would make up about 1% of the atmosphere each, and then there be trace amounts of carbon dioxide, methane, ozone, and a few other notable compounds.

This combination of gases would be a “smoking gun” for life if we found it on a world other than our own. We know of a few inorganic pathways to arrive at substantial amounts of oxygen on a planet, but reaching a level of 5% or more seems to be extremely disfavored without life. The presence of oxygen in a primarily nitrogen atmosphere is even more favorable for life, and so if Earth transited across the face of the Sun for an alien civilization, we’d be a tremendously interesting world, even during the era of the dinosaurs. 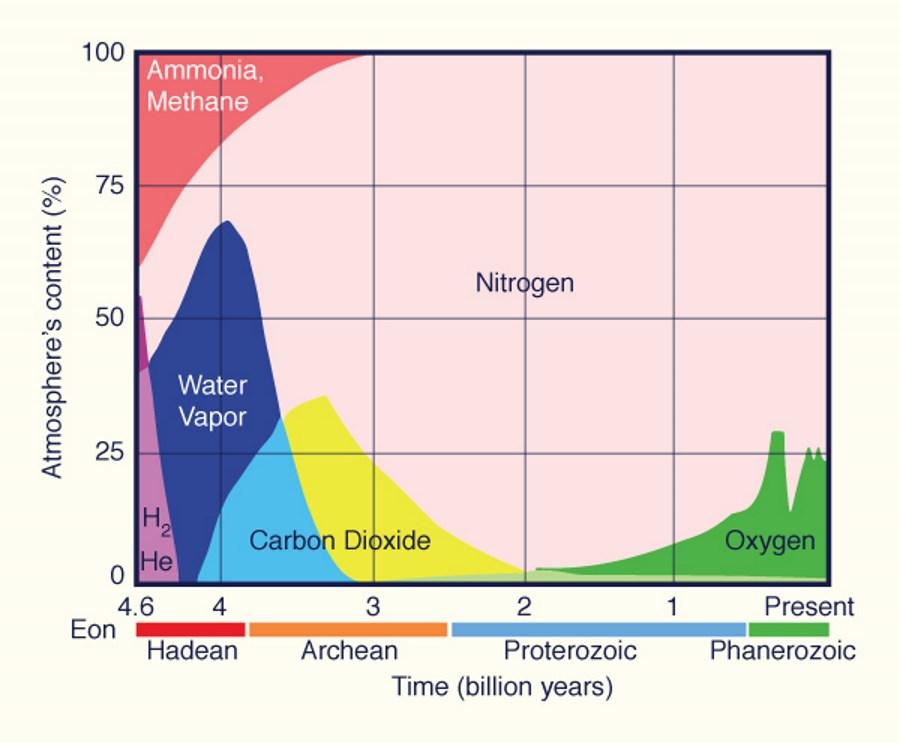 That’s a solid way to search for potentially inhabited worlds, but it only works for planets that are serendipity aligned with their parent star from the viewpoint of an external, distant observer. It’s how future observatories, like the James Webb Space Telescope or the 30-meter ground-based telescopes currently under construction, plan to search the nearest transiting worlds to Earth for potential biosignatures.

However, we’re certain to miss most of the inhabited worlds if the transit technique is the only one we use. If the alignment is off by even a tiny amount — a fraction of a degree for a planet like Earth — the transit simply won’t occur, and we’ll have no way of probing its atmospheric contents. But all hope isn’t lost, because there’s another technique that doesn’t rely on a lucky alignment, and could be brought within our reach with foreseeable improvements in technology: direct imaging. 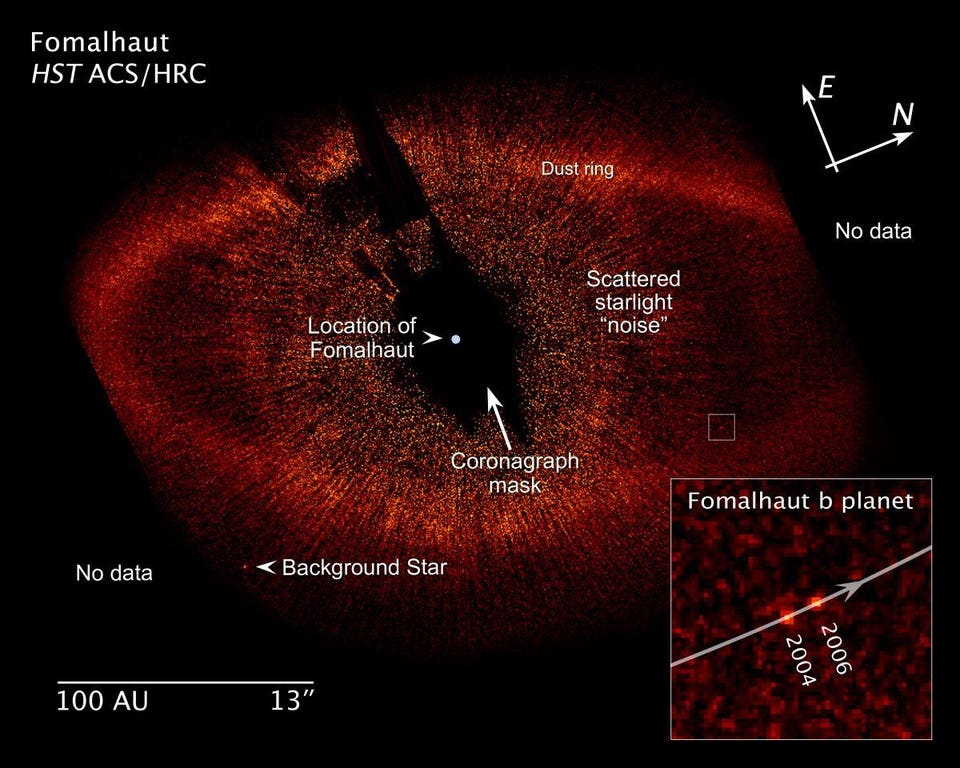 This visible-light image from the Hubble shows the newly discovered planet, Fomalhaut b, orbiting… [+]

Owing to the power of the Hubble Space Telescope (and later, ground-based adaptive optics), we’ve already taken our first direct images of exoplanets, and have even witnessed them actively orbiting their parent stars. By utilizing instruments such as a chronograph or a star shade, we can block the light of the parent star the potentially inhabited planet orbits, imaging only the planet of interest instead.

From just a single pixel, if we’re willing to wait and observe the distant world over large amounts of time, we could not only tell whether it’s inhabited or not, but additionally we could look for some of the most striking features we find on Earth. By taking a direct image of a planet and quantifying the various wavelengths of light that arrive at different times, there’s a very long list of properties we could learn. 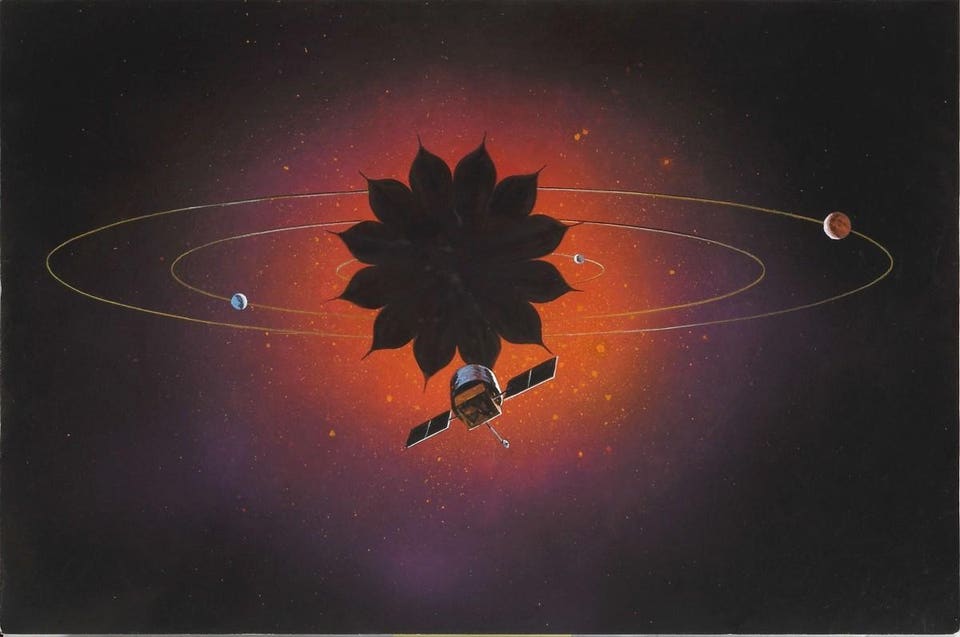 The Star shade concept could enable direct exoplanet imaging as early as the 2020s. This concept… [+]

From short-period changes and recurrent spectroscopic signatures, we could determine what the orbital period of the planet is.

From the colors of the planet, we could determine how much of the world is covered in water versus land versus ice, and detect the presence of clouds if they exist.

Over the course of a year (where the planet makes a full revolution around its parent star), we could determine: 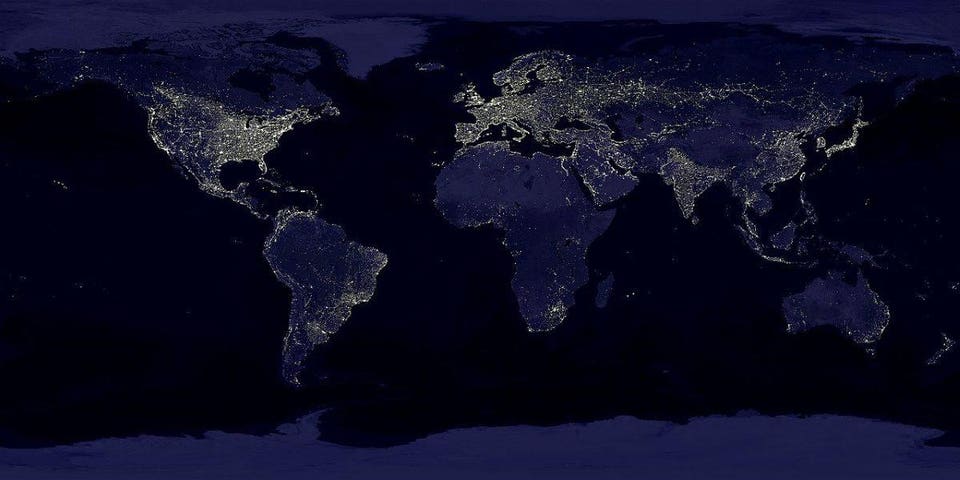 For an observer located less than 100 light-years away, that artificial lighting would be visible to a telescope large enough and optimized to view this type of faint light. It’s an amazing feat of technology that human beings have conquered the darkness of night through artificial lighting, but there’s a cost: the loss of the natural darkness that plants, animals, and other living creatures have adapted to over billions of years of evolution.

However, there’s a benefit we don’t often consider: the fact that we’ve modified the natural appearance of our planet means that a sufficiently intelligent alien species observing us could infer the existence of a planet-altering species. It’s not a slam dunk, but such a signature is a strong hint that the planet isn’t only inhabited, but inhabited by an intelligent, technologically advanced species. 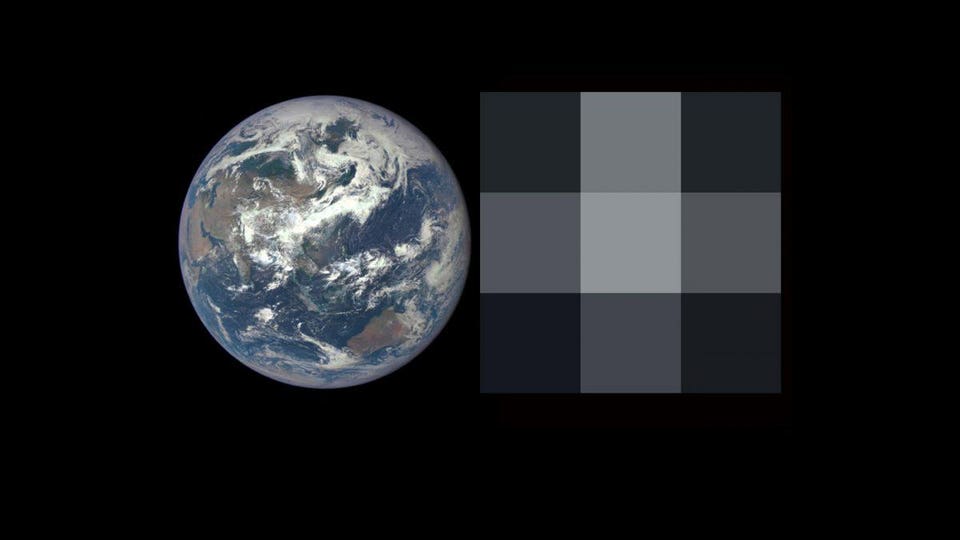 Left, an image of Earth from the DSCOVR-EPIC camera. Right, the same image degraded to a resolution… [+]

Without a second example of life in the Universe, we can only speculate on what the odds of life arising on a potentially habitable planet are. There could be billions of other worlds in the galaxy with life on them right now, or Earth could be the only one. There could be complex life that sustains itself for hundreds of millions or even billions of years on a plethora of planets in the Milky Way, or Earth could be it.

And finally, there could be thousands of space faring alien species in our galaxy, or human beings might be the most advanced creatures in the entire visible Universe. Until we find a second example of life to know that we aren’t alone, all we can do is speculate and impose limits on what isn’t out there.

There are four known exoplanets orbiting the star HR 8799, all of which are more massive than the… [+]

The same signals that we’re seeking from other civilizations — atmospheric signatures, surface features that evolve in a particular way, satellites and spacecraft, even deliberate and information-rich signals like FM radio waves — make our own civilization detectable by equally (or more) advanced extraterrestrials. From even a great distance away, an inhabited Earth would be identifiable, but an Earth inhabited by technologically advanced beings is only detectable to those civilizations close enough to see us in our recently achieved state.

The speed of light may be a limiting factor, but with enough time, the impact of human beings will be visible to any being residing in any one of more than 60 billion galaxies. It might not make for the fastest conversation, but finding even one instance of alien life beyond Earth would change our conception of existence forever. I can’t wait for us to find out!