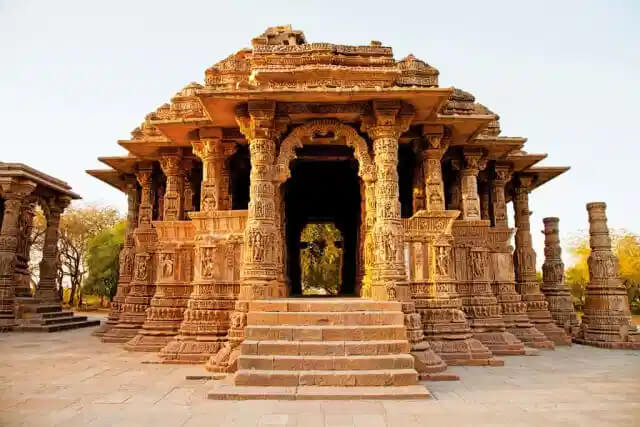 Ancient India was flourished with many great civilizations and cultures. There are numerous stories of ancient gods and kings in the Hindu sacred texts that share a deep bond with other ancient cultures of the world. Ancient India was blessed by great minds and powerful kings that ruled throughout the country. It has a vast history that cannot be shared in one article.

Ancient Sun Temple situated in Gujarat, India is one of the most beautiful yet complex arts in the whole world. The temple is located next to the Pushpavati River and is dedicated to the Hindu Sun God – “Surya.”

According to an ancient Hindu text, after Lord Rama (Hindu deity) saved his wife from the captivity of Raavana and killed him, he wanted to go to a place to purify himself for ‘Brahma-hatya’ (the sin of killing a Brahmin). Muni Vasistha then showed him a place in Modhera (a village in Gujarat) where now Sun Temple is located.

The temple was constructed by King Bhima I of the Solanki dynasty. Representatives of this dynasty considered themselves to be direct descendants of the sun god Surya. Therefore, Bhima decided to pay tribute to God Surya by building a temple. Bhima equipped the Sun temple with gold and other precious stones. Therefore, the Muslim invaders attacked the temple, looting all precious items and partially destroyed it. However, despite numerous attempts to destroy the structure, the temple still exists, reflecting its beauty in the world.

British Colonel Monier-Williams rediscovered the ancient site and spread the news in the western world to let people know about his finding.

The temple is built on a base that has the shape of a lotus which is considered sacred in the Hindu religion. The complex of the temple consists of three main elements:

– The Surya Kund, a pool that was used to collect pure water;
– The assembly halls (Sabha Mandapa) for religious gatherings and conferences;
– A hall where God Surya’s idol used to reside, which is believed to be illuminated by the dawn and dusk rays of the sun on the day of the summer solstice.

Unfortunately, the idol was destroyed by the invaders.

Before any religious ceremony, the devotees had to take a bath in Surya Kund, after that they could go through the arch to the Sabha Mandap Square. Around the pool, there were 108 small shrines dedicated to various deities of Hinduism.

According to some reports, there was an underground passage in the Sun temple, which led to the capital of the Solanki Empire, the city of Patan, from where all the valuable items of the temple were shifted in order to save them from invaders.

The entire Modhera temple is carved from soft yellow sandstone, displaying the art of ancient craftsmen to its visitors. The walls and pillars of the temple depict scenes from the Ramayana, the cycle of human life, as well as flowers and animals. Despite the years of erosion and attack, the Surya temple is still striking.