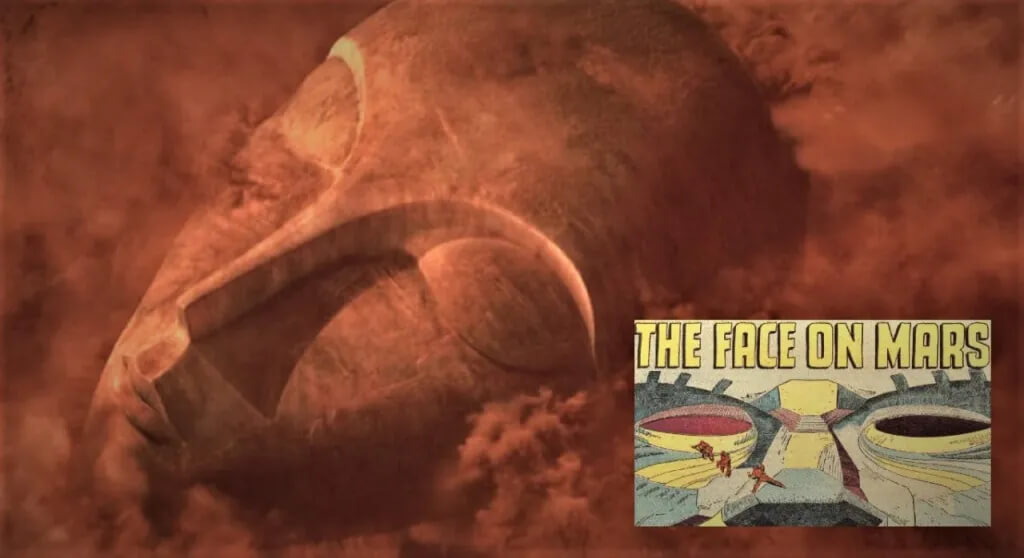 Comic book master Jack Kirby showed us the face of Mars decades before it was captured by Viking 1 in 1976 and became the most controversial structure discovered on the red planet. (face of Mars)

This “face” is a distinctive feature on the surface of the planet Mars located in the Cidonia region, specifically in Cidonia Mensae, which for some people resembles a human face. It measures approximately 3 km long by 1.5 km wide and is located at 41º05 ‘north and 9º50’ west. It was photographed for the first time on July 25, 1976 by the space probe Viking 1, which orbited the planet at that time.

The fact caught the attention of the public six days later in a press report delivered by NASA. After the controversy raised about its possible artificiality, other probes and orbiters returned to photograph the region in higher resolution to show a structure that seemed more geological and natural, explaining that the appearance of a symmetrical face was given in the original photograph because the combination of the Sunlight angle of illumination and low resolution smoothed the irregularities of the surface.

However, conspiracy theorists accused NASA of concealing and editing the images deliberately to hide what would be the definitive evidence of the past existence of a Martian civilization. Others insisted that the pareidolia (recognizing familiar patterns where there are none) of the face is not caused by a natural formation, but by the erosion of hundreds of thousands or millions of years of an artificial structure and that this can only be proven or refuted with an in situ exploration, and not with photos taken from orbit. Photos that, in addition, would show equally eroded pyramids in the vicinity.

In a 1958 comic book, entitled “The Face on Mars”, which is the second issue of Harvey’s Comics’ Race to the Moon series, author Jack Kirby tells us how a group of explorers finds an artificial structure shaped like human face on Mars. But not only that, after climbing it, they discover that the eyes of this construction are hollow and lead to a sort of room of visual records that shows the final destiny of the Martian civilization: an interplanetary war finished with most of the atmosphere and the few survivors took refuge in the underground kingdom.

The latter is consistent with what some planetary scientists contend now: if there were life on Mars, it would be under its surface. Something logical considering the hostile levels of radiation that hit the planet due to its weak atmosphere and the absence of a magnetosphere.(face of Mars)

It also coincides with modern theories that hold that an ancient civilization on Mars was annihilated – as Kirby recounts – by a nuclear attack by another alien race. For example, physicist Dr. John Brandenburg recently presented an essay that says the nuclear isotopes in the atmosphere of the red planet resemble those of a hydrogen bomb, “perhaps launched from space in a nuclear attack on Mars.” This would be supported by data on the high concentration of Xenon-129 from the Martian atmosphere, and uranium and thorium from the surface, collected by NASA’s Mars Odyssey.(face of Mars)

This has led some conspiracy theorists to think that certain authors had access to privileged information that they reflected in their works in the form of fiction, filtering part of a reality hidden from the public. Or can it be that humanity did not originate on Earth and the destruction of its true native world is recorded in the collective memory of the species? If it is the latter, NASA plans to return home before the year 2040 .. What do you think? Leave your comment below!(face of Mars)