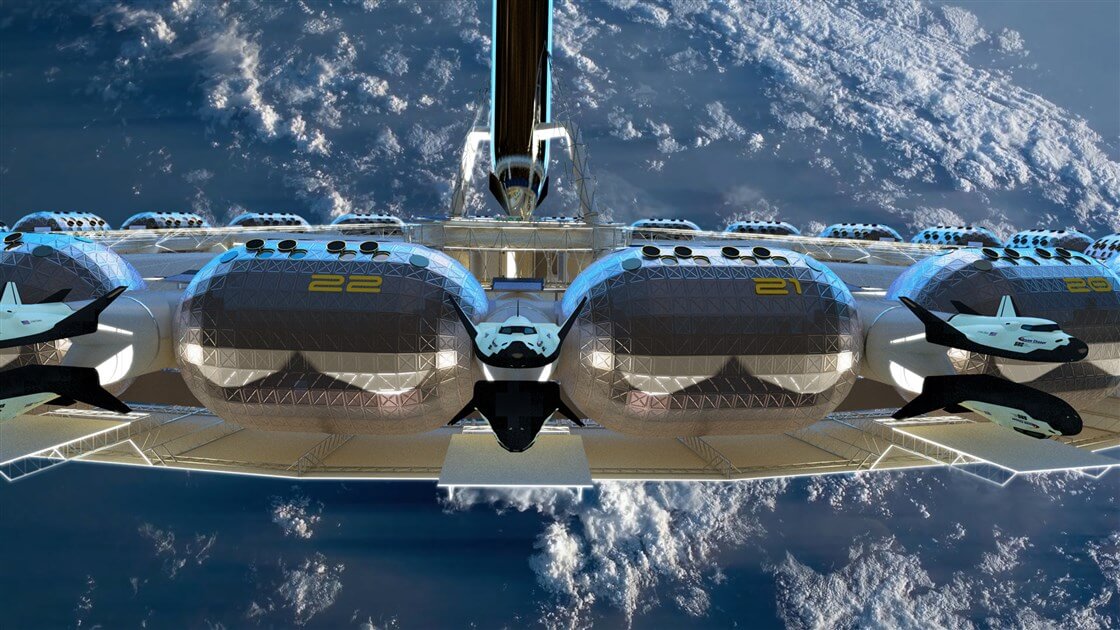 For many people, getting away from it all means decamping to a cabin in the woods or a house by the beach. Soon there may be another option: lifting off to a hotel serenely orbiting high above the planet.

Though space hotels have long belonged only to the world of make-believe, that’s about to change. NASA says it will open the International Space Station (ISS) to tourists as early as 2020. A Houston-based startup called Orion Span has proposed a four-guest space hotel called Aurora Station that would open in 2022.

And now the Gateway Foundation, a startup in Alta Loma, California, is planning what may be the most ambitious space hotel project of all: a sort of space-based cruise ship big enough to hold a pair of hotels that would accommodate 100 guests and perhaps three times as many crew members. The facility would feature artificial gravity and have restaurants, gyms, sports arenas and concert venues as well as spaceplanes ready to whisk guests back to Earth in case of an emergency.

The foundation calls its planned facility the Von Braun Rotating Space Station, a nod to Wernher von Braun, a Nazi rocketry scientist who left Germany in the aftermath of World War II to become one of the chief architects of NASA’s Apollo program. Von Braun popularized the idea of a wheel-shaped space station in the 1950s.

The foundation aims to assemble the facility in orbit by 2025 and open it to visitors in 2027 or soon after, says Tim Alatorre, the foundation’s senior design architect. “There hasn’t been a lot of movement historically to get the average person into space, and we’re pushing to make that happen,” he said. “In a few years we’re all going to be just thinking of space as a normal vacation option.”

Wolfgang Fink, an associate professor of aerospace and mechanical engineering at the University of Arizona College of Engineering in Tucson, agrees that space hotels are coming. “I am absolutely convinced it’s going to happen,” he says. “It’s definitely not science fiction.”

But the timetable may be overly ambitious. “We’re still a ways away from actually being able to build these hotels and operate them in orbit,” says Glenn Lightsey, a professor of space technology at the Georgia Tech College of Engineering in Atlanta. “It’s coming, and that’s exciting. But it will take a little time to build up to that.” Lightsey sees the first space hotels opening in the 2030s.

Details about how guests would get to and from space hotels are sketchy. The Gateway Foundation says it’s in talks with SpaceX about using its Starship vehicle, with guests blasting off from Florida. It’s unclear how long the voyage would take, though astronauts can reach the ISS in as little as six hours.

The Gateway Foundation hasn’t said what a stay at the Von Braun Station would cost, but Orion Span says a 12-day stay aboard its Aurora Station will run $9.5 million, transportation included. NASA says guests will spend $35,000 to spend a night on the ISS — not too bad until you consider that transportation costs could run millions more.

The first group of space tourists — seven people who went up from 2001 to 2009 — paid Russia more than $20 million apiece to fly to and spend time aboard the ISS.

“The early costs will be fairly high,” Alatorre says. “Our goal is to get the costs down to where you have a choice: You could save up and go for a week’s vacation in Europe, or you could go to space.”

What would it be like to visit the Von Braun Station? The first stop for arriving guests would be the spacecraft docking station at the hub of the wheel-shaped structure. From that point, guests would take an elevator to the rooms arrayed on the outer ring, where the steady rotation would be sufficient to simulate gravity equal to one-sixth that on Earth’s surface.

The artificial gravity means guests will be able to eat, exercise, shower and use the bathroom much as they would back on Earth. But since it will be much weaker than gravity on Earth, guests would be able to enjoy some activities that would be impossible on terra firma.

The artificial gravity is also a matter of safety as well as of fun and convenience. Astronauts who have spent long stints in weightlessness have experienced swelling, weakness, eye problems and other maladies.

The facility’s décor will be nothing like the stark white furnishings seen in many science fiction movies set in space, Alatorre says, adding that he plans to create a homey feel by using natural materials like cork and bamboo.

Most guests visiting Von Braun Station would stay for a week or two, while crew members would likely spend six months in orbit before returning to Earth.

The ISS has shown that it’s possible to build large structures in Earth orbit and that people can live there safely and in relative comfort for extended periods. Yet some basic questions about space hotels remain.

Fink points to other potential concerns, including the risk to the space hotels and their guests posed by orbiting space debris.

Astronauts accept that even a tiny piece of debris could cause severe damage to a spacecraft, but it’s not clear how much risk guests at a space hotel would, or should, accept. Alatorre says that, like the ISS, the von Braun Station would have protective shielding and could be steered out of the path of larger debris. In the event of a breach, emergency bulkheads would seal off the damaged area.

Ultimately, Lightsey says, a visit to a space hotel may be a bit like visiting a polar research station — another extreme environment that is now open to intrepid tourists.

“At first it was just explorers and scientists, and now we have a city down there basically at McMurdo Station,” he says, referring to the facility on Ross Island off the coast of Antarctica. “Earth’s orbit will be the same way over time.”